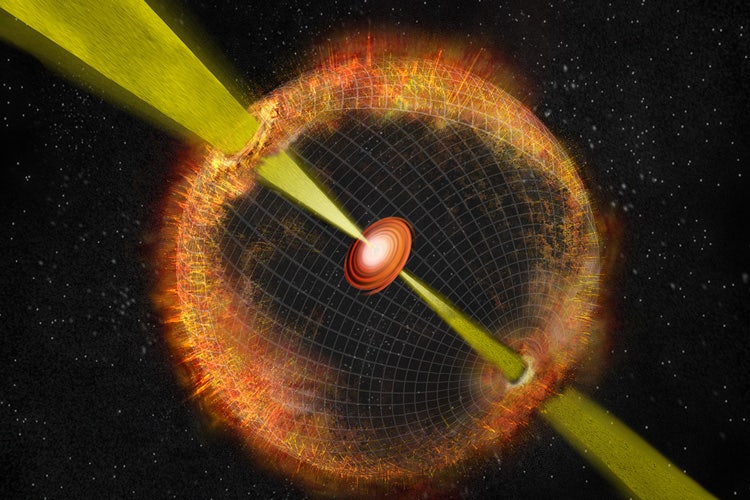 Mysterious "ghost" radio emissions have been spotted by researchers, some that have lasted for 25 years, only to fade away and then return.

University of California at Berkeley Assistant Research Astronomer Casey Law believes the emissions could be the "afterglow of the explosion of a massive star, which would have emitted an undetected long-duration gamma ray burst. "

" We believe we are the first to find evidence for gamma ray bursts that could not be detected with a gamma ray telescope, "said Law in a statement. "These are known as 'orphan' gamma ray bursts, and many more such orphan GRBs are expected in new radio surveys that are now underway."

WE NEED TO KEEP LOOKING FOR ALIENS, SCIENTISTS TELL SENATORS

Gamma-ray bursts are very rarely seen in the universe because the source of them, a relativistic jet of material emerging from the explosive merger, need to be pointing directly at the Earth.

The research was published in the journal Astrophysical Journal Letters .

MYSTERIOUS RADIO SIGNAL FOUND IN SPACE AND ASTRONOMERS ARE NOT SURE WHERE IT'S COMING FROM [19659005] "We thought," That was weird "," Law said, referring to the fact it was still detectable.

"Its peak brightness in the '90s was quite high, so it was a big big change: about a factor of 50 decrease in brightness. We basically went through every radio survey, every radio dataset we could find, every archive in the world to piece together the story of what happened to this thing, "Law added."

The object is 284 million light-years away from Earth in a dwarf galaxy that is still forming stars, a phenomenon associated with fast radio bursts.

"Part of the story is about how much of the sky is changing, even on this long time scale, and how hard it is to test that, "he said." It is also partly about the value of new data science techniques. Pulling out information from these rich and diverse data sets is helping us do good science. "

How to see Perseid meteor shower 2020, one of the best of the year