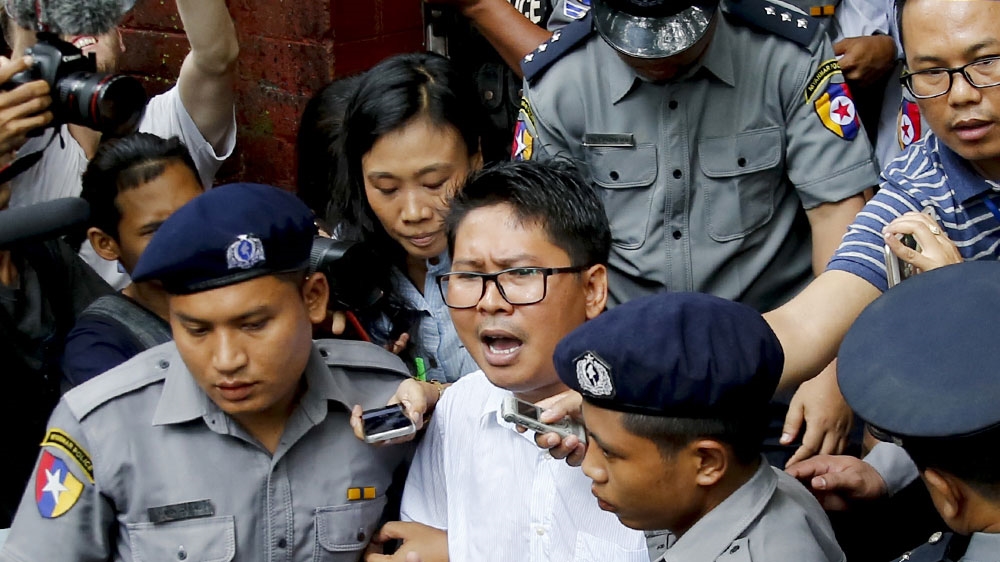 A court in Myanmar has been appeal by two Reuters news agency reporters sent to seven years in jail for breaking the country's Official Secrets Act, in a case that rallied press freedom advocates.

Lawyers for Wa Lone, 32, and Kyaw Soe Oo, 28, had lodged the appeal in November against their conviction, citing evidence of a police set-up and lack of proof of a crime. The appeal argued that the original trial was conducted in an "unjust less" and had called for the reporters' immediate release.

But High Court Judge Aung Naing on Friday said the lawyers failed to submit enough evidence to prove the pair's innocence. He said "it was not acceptable" to say that the defendants had acted according to journalistic ethics.

"It was a suitable punishment," the judge in Yangon said, referring to the seven-year prison term.

The defense has the option of making a further appeal to the country's supreme court, based in the capital, Naypyitaw.

"Today's ruling is yet another injustice among many inflicted upon Wa Lone and Kyaw Soe Oo. Stephen J. Adler, Reuters Editor-in-Chief, said in a statement.

"Reporting is not a crime, and until Myanmar rights this terrible Wrong, the press in Myanmar is not free, and Myanmar's commitment to rule and democracy remains doubtless. "

Before their arrest in December 201

7, the two journalists had been investigating the killing or 10 Rohingya men and boys by security forces and local Buddhists in western Myanmar's Rakhine state during an army crackdown that forced more than 700,000 members of the long-persecuted, mostly-Muslim minority to neighbor Bangladesh.

In September last year, a Yangon district court sent Wa Lone and Kyaw Soe Oo at seven years in prison for illegal possession of official documents, kicking an international outcry from activists and diplomats in a case seen by many as a test of Myanmar's fledgling democracy.

Myanmar leader Aung San Suu Kyi said in September 2018 that the reporters' jailing had nothing to do with freedom of expression. In comments made the week after their conviction, she said they had been sentenced to act official secrets and "were not jailed because they were journalists." Bangkok-based independent Southeast Asian analyst Benjamin Zawacki told Al Jazeera he doubted Aung San Suu Kyi would offer the two journalists a pardon, and said the decision to reject was also a reflection of China's growing influence.

"(The decision) shows here contempt and the contempt in the country for international opinion, "Zawacki said." The continued rise of China has allowed a certain amount of political interference to be run on behalf of countries like Myanmar, such that it can be defended internationally in a way that was not really possible 10 years ago, much less 20 or 30 years ago. "

Myanmar's military admitted last January that his soldiers took part in the killings, but only after months of denials.

Human Rights watchdog Amnesty International says that a senior police officer "testified in court that the two journalists were set up by police" and called the rejected appeal in "appalling injustice."

"The decision to keep these two brave and innocent Reuters journalists behind bars in the hands of the Myanmar authorities' attempt to hide the truth about the atrocities committed in Rakhine, "[Amnesty'sDirectorofCrisisResponseTiranaHassansaidinastatement

"One day in prison was already an injustice. This appalling farce must end now. Myanmar authorities must release the two journalists immediately and unconditionally. They must also ensure that the people of Myanmar have the right to freedom of expression, association and Peaceful assembly, including by repealing or amending the oppressive laws that are used against journalists, activists and human rights defenders. "" We are very disappointed about today's judgment, "said the journalists' defense lawyer Than Zaw Aung, adding that the decision would have a "negative impact" on the country and its media. He says his team will discuss the option of a supreme court appeal with the two reporters.

China says it will abide by US trade agreement, but respond to “bullying”