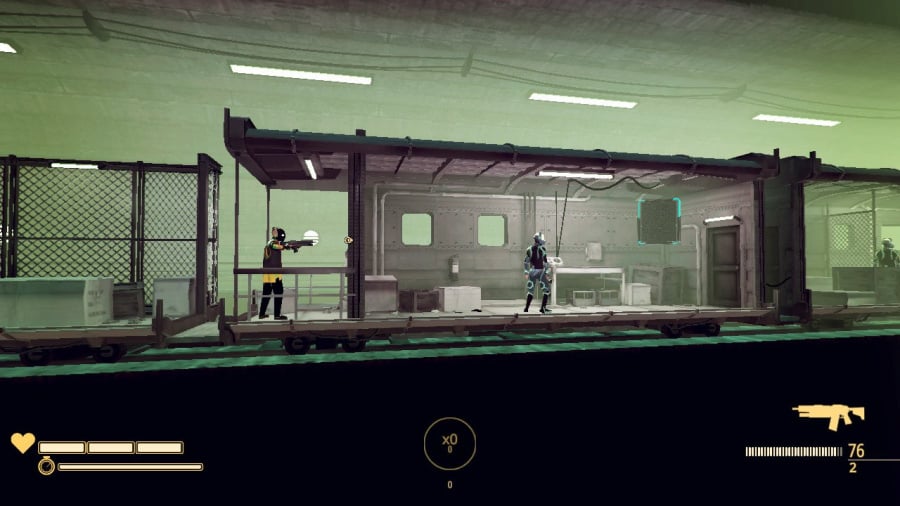 Devolver Digital's latest death spectacular, My Friend Pedro starts as it means to continue – with a masked protagonist roused into consciousness from his slumber in the basement of a murderous criminal's hideout by his only friend, a floating sentient called banana called Pedro. The pair quickly and purlin a pistol and make for a quick escape by means of murder, and lots of it. This is your run-of-the-mill action game murder though, no; when a banana is in charge things are… different

In the space of a few minutes Pedro has passed on the totality of his plantain power-ups, unlocking the keys for your character to slow down time a -la Max Payne parkour jump up walls, flip through the air, ricochet bullets off metal surfaces, dual-wield Uzis with (banana) split aiming for maximum kill counts and generally turn every screen full of bad guys (and that's a lot of screens full of bad guys) into your own mini-episode of The Raid 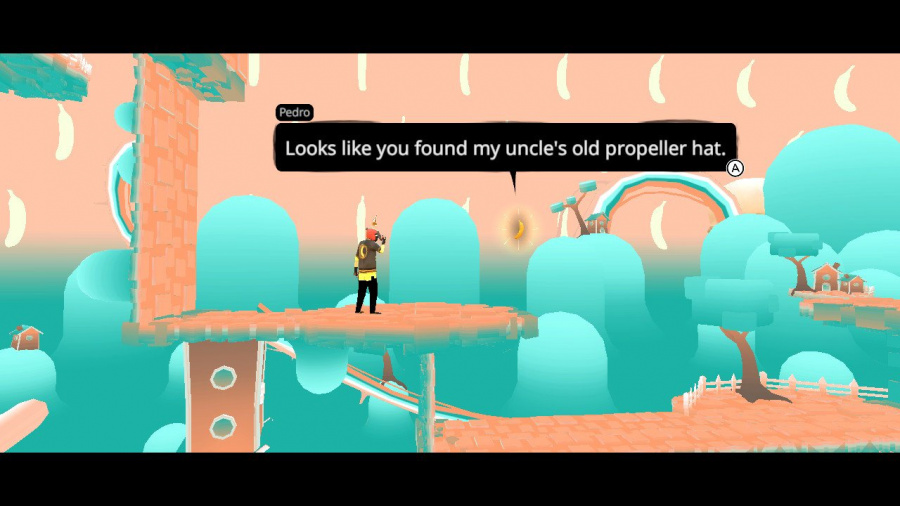 4 Adult Swim Flash game of the same name, My Friend Pedro has been playing players with gameplay footage of its stylish and brutal brand of 2D platforming carnage over the past year or two, a mixture of ludicrously OTT violence and comedy elements that in Many ways seemed to be true. What you get here is slightly clunkier to control than we might have hoped.

] With so many options available to you at any given moment it's maybe unsurprising though that the controls can feel unwieldy at times, the main culprit to our mind being a slowdown mechanic that's absolutely central to gameplay and by default initiated by a slightly cumbersome click of the left thumbstick. Pirouetting as a means of dodging bullets, meanwhile, is assigned to the L button and can often feel a little too far away and hard to hit while you shoot, crouch, roll, jump and boot your way around the screen. the biggest bidder, however, is aiming at an object – a frying pan, knife, petrol or body part – in order to kick it at an assailant. For a straightforward point you just slap X; however, for a more controlled, strategic placement you have to stand next to the object in question, aim with the right stick and then press X to kick the thing – an impossible task without a change of grip we found, but the game does usually Place such items in areas that allow you to stop and do this. Of course, all the controls can be reassigned in the options but it's hard to find a better than the default, and it's just one of those things that most likely learn to live with in order to get on with the killing – which is delightfully addictive stuff, although repetition does creep in pretty quickly. 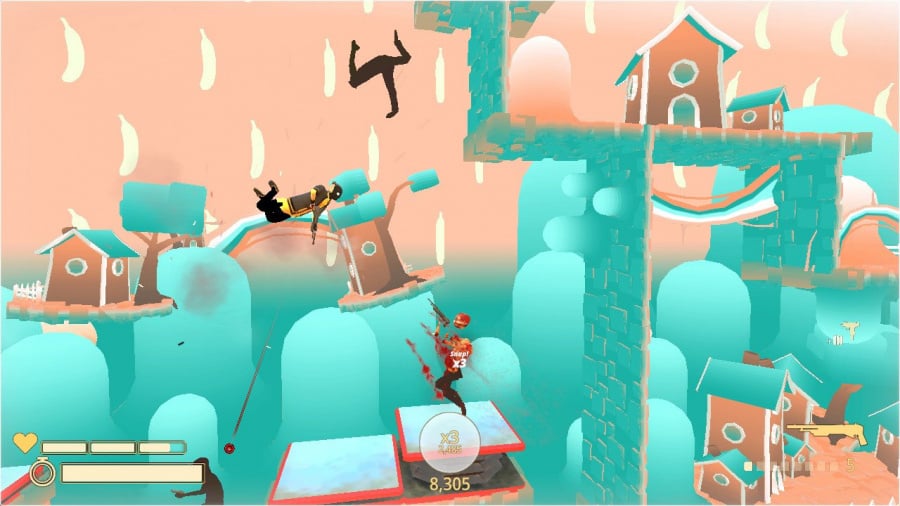 And it's this repetition (alongside those controls) that's the main offender in dragging the game down for the most part. Aside from an extended mid-game section that sees things take on more fantastic nature and a smattering of turrets, lasers and larger foes later on down the line, levels are for the most part quite dull, joint affairs; identical rooms full of short bursts of violence mixed with light puzzling and platforming that charge you with killing as quickly and stylishly as possible in order to maximize your score and achieve as good as grade as you can for your bad behavior. On-screen prompts let you know how you are doing, while Pedro will pop his delicious little head in the corner of the screen. While the levels do very little to create any sense of real atmosphere, the soundtrack jumps to do the heavy lifting; a very Hotline Miami -sque mix of dark and catchy tunes with an uneasy psychedelic edge

Criticism aside, the action on offer in My Name is Pedro is impressively malleable though, with the various mechanics at your disposal meshing incredibly well for the most part – although we couldn't help but feel the wall-jumping was a little scrappy in places; your character's legs are seemingly too long for his body at times, and the dual-wielding does get a little hard to keep on top when things get crazy – which they absolutely do on the hardest of the three levels of difficulty on offer here.

Repeated runs of areas open up possibilities and it's only in learning enemy positions and going in with a plan of action that sees the real appeal of the game kicking in; it's all about replaying again and again until you nail that perfect run, performing a death-defying ballet of violence that has John Woo throwing into the air with joyful abandon. You can find all kinds of hilarity awaits as you fly frying pans into the air to get rid of bullets off, jump from speeding skateboards to deliver death via slo mo flying kick and generally Matrix the absolute s ** out of things. 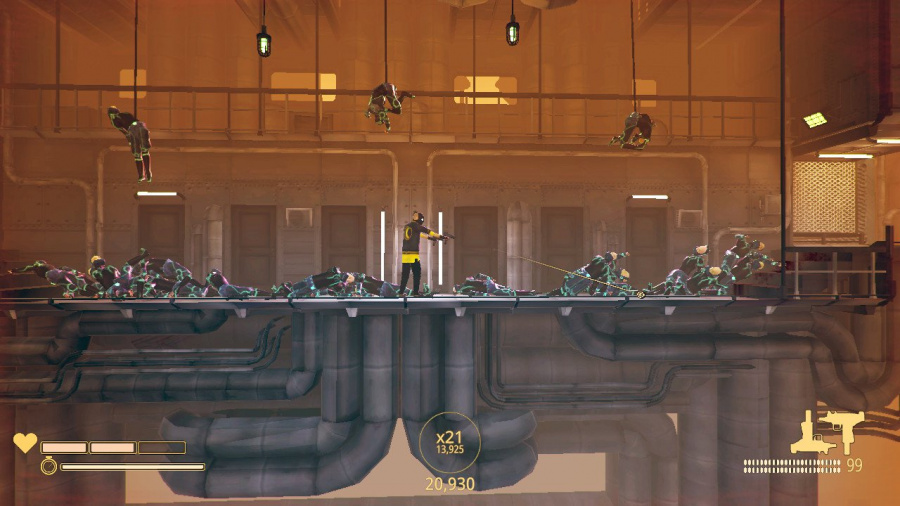 little is there, needless to say, it's absolutely played for farce and not in the slightest bit interested in making sense or being serious. It does also end with a pretty naff boss fight which, disappointingly, does away with the need to use much of your armory of weapons and skills that you've accrued over its running time – which is quite short by the way. A full playthrough can be attained quite easily on normal difficulty in around two hours, longer on the hardest "Bananas" setting, which strips you of your ability to recharge health as well as making dodging incoming four more demanding. This is, however, as we've said, a game designed to be replayed for high scores and S-Rank attainment and we found ourselves returning repeatedly to perfect levels which adds a good few hours to proceedings.

In terms of performance on Switch, My Friend Pedro runs smoothly in docked and handheld and looks pretty good, more so in portable mode where the smaller screen hides low-res character textures and makes those dull gray backgrounds look more appealing. There's no noticeable slowdown or FPS slip-ups (insert your own banana skin gag here) which is impressive with some of the later stages filling the screen with pretty explosive action.

My Friend Pedro, for the most part , delivers on its promise to provide you with an almost endless variety of ways with which to carry out the flashy fire or OTT violence that had gamers eagerly awaiting its release. The controls can be cantankerous at times and the levels are far from being an eclectic mix, but it adds enough diversions to the action with light puzzling and platforming elements to keep things interesting enough to see through to the end. Also, your best friend is a banana.