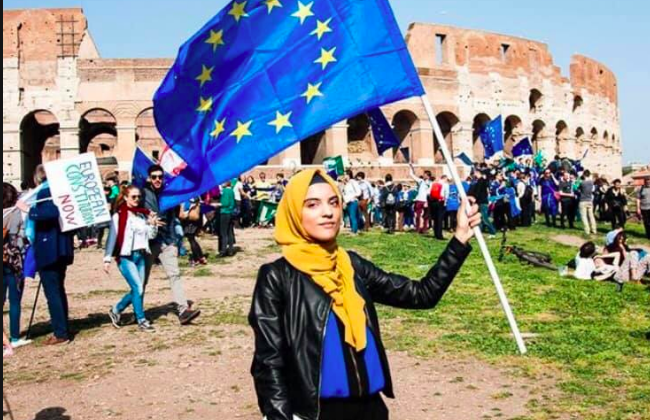 Another young of Moroccan origin who makes a feeling in the world. Yasmine Ouirhrane student Italian of Moroccan origin has just mentioned Shwarzkopf Foundation "European Year of the Year 2019" . 23 years Yasmine is one of "United Nations Women's Leader" according to Schwarzkopf Young Europe Foundation honoring annually since 1997 young June linked to "European integration and understanding between people."

Yasmine, a student at Sciences Po Bordeaux has just been crowned according to the Foundation's website for her commitment to "equality between women and opportunities for migrant participation in Europe". She even organized the organization European Youth Forum in Strasbourg while being involved in projects with several young people from the suburbs of France and as part of young leaders Women delivering who work for "equality".

"As a daughter of an Italian mother and a father who immigrated to Italy, I fought my whole life to be integrated and accepted. This award symbolizes a milestone and a major step towards the integration of all young European citizens," the young winner of the foundation.

"This is our collective victory: For young women, for young girls, immigrants, for Europe, for unity in diversity, for change, tolerance, respect for others, for peace. She added on her account Facebook while emphasizing: "To all young people who need hope and positivity to feel part of their society. For social integration, for a stronger, united and sustainable Europe. My message is: We are also European, today more than ever. "

The young prodigy, described as " inevitable partisan of European rights and values ​​" also won a sum of ] 5000 euros, to" finance an internship in a European institution or a personal project. "

But this news failed to cause a scream …

His meeting evoked the indignation of the French right-wingers, which condemns this qualification, which according to Marine Le Pen, promotes radical Islam

The European Union adopts its elections. On May 26 you have to choose! For us, the promotion of radical Islam is no! MLP #OnArrive pic.twitter.com/y8NzzSFyp0