Mena Region: Refunds do not dry up 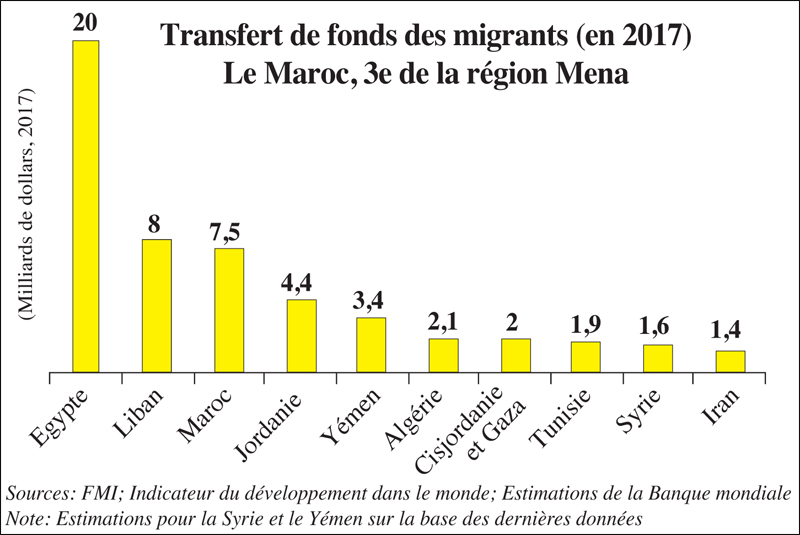 Morocco is third among the countries in the MENA region who receive the most funding from its citizens. Peloton, in response to more stable exchange rate forecasts

Egypt continues to be the largest fundraising fund in the Middle East and North Africa region (MENA). This region increased by 9.3% to reach $ 53 billion in 201

7, driven by significant flows to Egypt in response to stable exchange rate forecasts. The New World Bank's notes on migration and development

Egypt is far ahead of Lebanon (8 billion dollars) and Morocco (about 7.5 billion dollars, see illustration). Improved economic growth and employment in Europe and the poor dollar against the euro increased transfers in the Maghreb last year (Morocco by 5% to November 2017, Tunisia by 3% in one year). T

Growth prospects have, however, been blown up by the sharpening of foreign labor rationale in Saudi Arabia 2018. The reduction of subsidies, the increase of various taxes and the introduction of a value added tax in Saudi Arabia and the United Arab Emirates has increased the cost of living for foreign workers.

This stronger than expected transfer is due to growth in Europe , Russia and the United States. The recovery of these shipments, valued in US dollars, benefited from rising oil prices and strengthening of the euro and the ruble.

One of the long-term risks of repayment of transfers is the sharpening of many countries of origin. In addition, the banks' risk reduction and increased regulation of money transfer operators (two measures to combat financial crime) continue to dampen the growth of public transfers.

Overall, the average cost of a transfer of $ 200 was 7.1% in the first quarter of 2018, more than the double target of 3% in the goals. sustainable development, according to the World Bank's analysis. Sub-Saharan Africa is the region where the transfers are the most expensive with an average cost of 9.4%. The main obstacles to reduced transfer costs include risk mitigation measures taken by banks and exclusive partnerships between national postal systems and money transfer operators. These factors limit the introduction of more efficient technologies (including online and smartphone applications and the use of crypto currency and block chains) in transmission services.

French residents of Morocco urged not to leave the kingdom