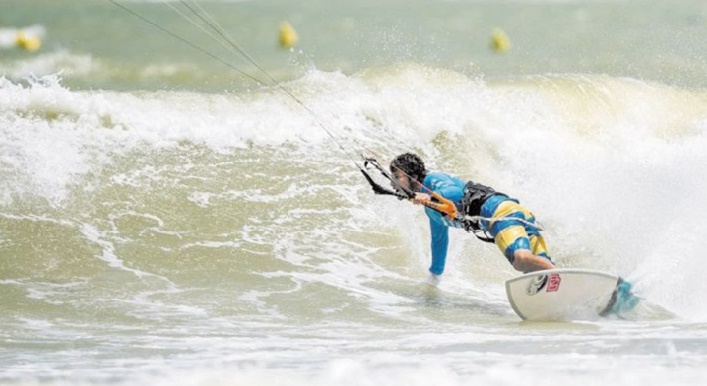 Italian rider Airton Cozzolino finished the first day of the 9th edition of the Kitesurf World Championship "Moulay El Hassan GKA Kitesurf World Tour Morocco-Dakhla 2018" (24-29 April) at the top of the ranking. Cozzolino beat Australia's Keahi de Aboitiz and Capverdien Mitu Monteiro, while Spaniard Matchu Lopes finished fourth.
The Moroccan icemail Aderzane, meanwhile, occupied the fifth position. "The competition was tough," said Aderzane immediately and noted that the weather conditions had caused a very high level of competition. "Despite the lack of resources, the Moroccan riders who participate in this edition aim at achieving one of the first four positions," he said, "and for the ladies it is the Dutch Jalou Langeree. Took the lead followed by Hawaiian Moona Whyte and Portuguese Inês Correia
Organized under the patronage of HM King Mohammed VI, the World Championship "Moulay El Hassan GKA Kitesurf World Tour Morocco-Dakhla" will be labeled, under this edition, with the participation of about fifty of the best riders coming from around the world to attend In this event, it will be crucial for fans of goggles around the world.
In addition to kite surfing, other sports, leisure and environmental awareness activities will be planned for the benefit of young people and children from the Dakhla-Oued Eddahab region at Foum Labo Beach. dunes, with organization of beach cleaning activities, as well as introductory skiing surfing sessions led by riders and specialized instructors tors.