International donors at the bedside of battered Lebanon 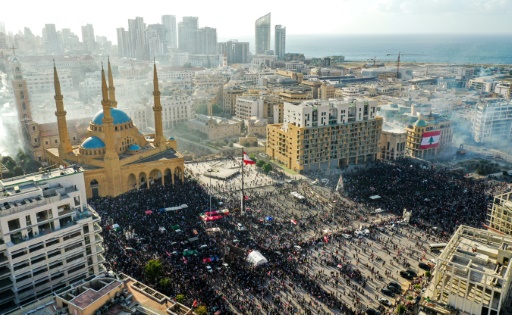 SHARE International donors at the bedside of battered Lebanon

From the United States to France via China, Russia and Egypt, international donors meet on Sunday for a video conference in support of Lebanon, ravaged by a giant explosion and the economic crisis.

The online conference, which is organized on the initiative of France and the UN, starts on Sunday at 14.00 (12:00 GMT). It should mark the beginning of an “emergency and hope for the future” in the country, the French presidency said on Saturday.

The first leader to visit the Lebanese capital after the deadly explosion, French President Emmanuel Macron on Thursday promised Beirut quick and massive support from the international community.

The huge explosion on Tuesday, in a warehouse in the port of the Lebanese capital, left at least 1

US President Donald Trump has announced that he will attend this meeting: “We will hold a video conference on Sunday with President Macron, Lebanon’s leaders and leaders from around the world,” he tweeted on Saturday.

“Everyone wants to help! “He added that he had spoken to the French president.

Israel will not be “at the round table” at this conference, it was specified at the Elysee, but a contact “created by the UN”.

Iran, for its part, has “not expressed its willingness to participate”, but “the Gulf countries – Kuwait, Qatar, the United Arab Emirates, Saudi Arabia – have been invited,” the Elysee added, stating “there is no doubt that they will be represented”.

The European institutions will also take part in this conference to mobilize humanitarian aid.

If the UN has estimated Lebanon’s $ 85 million need for the health sector alone, the French president’s entourage did not want to provide the amount of aid that could be released on Sunday.

“The immediate goal is to provide Lebanon’s emergency needs on conditions that allow aid to go directly to the people,” the Élysée explained. The priorities are “consolidation of damaged buildings, emergency medical assistance, food aid and restoration of hospitals and schools”.

“The methodology is the one used by international organizations, there is a need for us not to write a blank check to the Lebanese government,” the same source continued.

The destruction caused by the explosion, apparently caused by the storage of thousands of tons of ammonium nitrate in a depot in the port of Beirut, is a disaster for many for the Lebanese.

For many months, Lebanon has been plunged into a very serious economic crisis, marked by unprecedented depreciation of its currency, hyperinflation, massive redundancies and drastic banking restrictions.

On Saturday, thousands of protesters marched through central Beirut. Led by retired officers, protesters stormed the Foreign Ministry headquarters, declaring it the “headquarters of the revolution.”

For the French Presidency, the demonstrations testify to “the confusion, the distress of the people, the need for change”.

“Lebanon is sinking, we think it has hit rock bottom, so it’s time to get back to the surface,” the move reiterated to Emmanuel Macron, recalling that the French president promised during his visit on Thursday that support would not go to “corruption”.

Lebanese President Michel Aoun on Friday rejected all international investigations into the giant explosion, saying it could have been caused by negligence or a missile.

Paris, on the other hand, considered that there were “sufficiently objective elements to believe that the explosion was unintentional”.

While rescuers in the Lebanese capital are still working to find survivors, international aid continues to flow. As soon as the explosion was announced, several countries, first and foremost France, sent aid workers and material aid.

Egypt and Qatar will open field hospitals and the World Health Organization (WHO).

The latest initiatives so far, the Canadian government on Saturday announced the launch of a relief fund for Lebanon and urged Canadians to be generous. France has set up an air and sea bridge to transport more than 18 tonnes of medical aid and almost 700 tonnes of food aid. One cargo plane left on Saturday, two more were on their way on Sunday.