Breaking News
Home / World / In Lesbos, the streets were gradually emptied of thousands of homeless refugees

In Lesbos, the streets were gradually emptied of thousands of homeless refugees 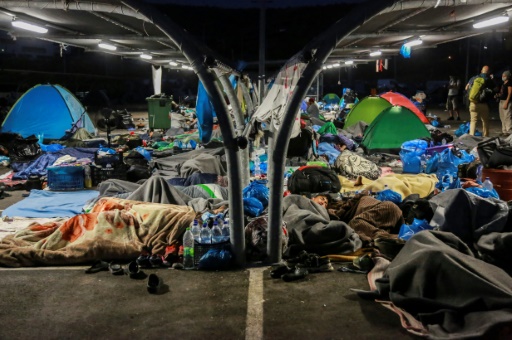 SHARE In Lesbos, the streets were gradually emptied of thousands of homeless refugees

After a police operation early in the morning, the streets and parking lots near the ruins of the burned camp Moria on the Greek island of Lesbos were slowly emptied on Thursday by thousands of migrants who had slept there for a week in the same room. asphalt, 5,000 of them have joined a new camp.

“We were free, and now we will be locked up again,” Mustafa, a Sudanese refugee, told AFP.

“If we do not want to go to the camp, they will force us to do so,” added Abdul Sabu, an Afghan migrant. “We must go, otherwise our asylum application will be rejected,”

Thousands of refugees, on the streets since the fire that destroyed the Moria mega camp on the night of September 8-9, were awakened from their sleep by police at 7:00 to be driven to the new camp, “provisionally” assured authorities.

Police, who were in force after blocking access to the area to Médecins Sans Frontières and the media, walked quietly around the tents to empty the area of ​​their homeless, an AFP journalist.

Under an already strong sun and against the background of children’s tears, the refugees calmly folded their blankets and carried their meager things, which had been saved from the flames, in bags.

Family for family, some with prams others pulling boxes, refugees are still queuing in the afternoon outside the camp, quickly erected by the authorities and the UN after the fire.

“Migrants are being moved from the streets to the new structure, from abandonment to care, from health risks to public health control,” welcomed the Minister of Civil Protection Michalis Chryssohoïdis, present at the event. of the police operation.

So far, 5,000 migrants have joined the new camp, of which 135 have tested positive for the coronavirus, Migration Minister Notis Mitarachi said Thursday afternoon.

It will take “a few days” to transfer the other about 7,000, the minister told media outside the camp.

Eight organizations lamented that the new camp does not provide legal aid to immigrants who have to reapply for asylum and do so through teleconferencing interviews.

“Neither asylum seekers nor legal aid organizations have so far received information from the Greek authorities about this infrastructure,” the groups said in a joint statement.

The Moria camp, the largest in Europe, set up five years ago at the height of the migration crisis and criticized for its difficult conditions, was completely destroyed by the fire, subject to Greek authorities. Six young Afghan migrants were arrested, four of whom were accused of “arson”.

Many refugees have refused to settle in the new camp for fear of being recaptured for several months pending a possible transfer to mainland Greece or another European country.

“Some go there, others resist,” said Scotty Kelew, 29, who arrived from the Democratic Republic of Congo six months ago. “We are really confused, we do not know what to do,” he told AFP. He thinks that “sooner or later” he will have to go there himself, but “for the moment” he remains “outside the camp”.

For Mustafa, “it’s awful” in the camp, “there is nothing, not enough food, toilets, no shower, there is not even a bed and no electricity available for the camp. ‘Immediate’.

Greek government spokesman Stelios Petsas said on Thursday that “conditions are better in the new camp compared to those in Moria”.

The purpose of this new camp is to allow refugees to “gradually leave the island of Athens” or “relocate elsewhere”, according to the Greek representative of the UN High Commissioner for Refugees in Greece, Philippe Leclerc, who visited Lesbos.

Michalis Chrysochoidis estimated that “half” of the refugees could leave Lesbos “for Christmas” and “the others for Easter”.

A complaint was lodged locally on Thursday against the new camp, claiming that it does not meet the standards for protecting the environment and archeological sites.