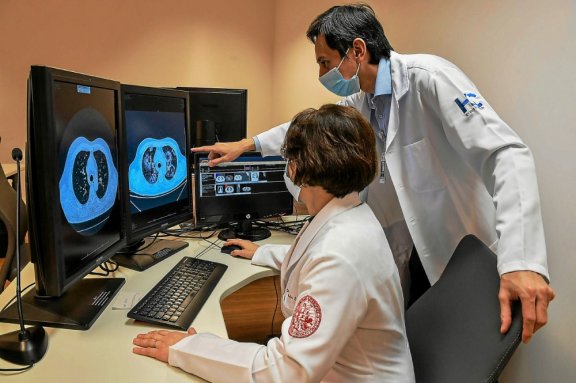 Algorithms for detecting lung injuries: in Brazil, a country hard hit by the Covid-19 pandemic, artificial intelligence comes to the aid of doctors to compensate for the lack of mass screening.

The RadVid-19 system, developed by the Chinese company Huawei and the German company Siemens, has been in operation since April in Brazil, where 2.6 million patients have been identified, of which about 95,000 have died. Physicians can thus submit an X-ray or CT scan of their patients’ breasts for analysis with algorithms to identify spots in the lungs. “The software identifies these areas and estimates the likelihood of receiving Covid-1

9,” explains Marcio Sawamura, Deputy Director of the Institute of Radiology at the Hospital of Clinics at the Faculty of Medicine at the University of Sao Paulo (USP).

On his computer, the practitioner can analyze the white and yellow circles that identify the injuries. He can also compare the course of the infection with previous pictures. The program is set up with, among other things, support from the Inter-American Development Bank (IDB). The software is now available at 43 Brazilian hospitals, 60% of which are public facilities.

To read on the subject In Brazil, coronavirus has created new favelas

Dr Marcio Sawamura emphasizes that the initial assessment established by artificial intelligence does not replace the diagnostic tests prescribed by the doctor. But the tool allows, according to him, to predict the delivery of treatments in this country where the president of the far right Jair Bolsonaro has never stopped minimizing the pandemic and where no massive test campaign has been launched. in place. In five months, Brazil, with a population of 212 million, has performed only 2.7 million PCR virological tests and 4.4 million serological tests.

Radiologist Arthur Lobo often uses RadVid-19, “which helps establish a diagnosis in case of doubt”. “Brazil has performed fewer tests than it should, scanners and radios have become diagnostic tools,” explains the practitioner, who practices in Belém, the capital of the state of Para (north), where the pollution rate (17,825 per million inhabitants) is 30% higher than that national average (12,420 per million inhabitants).

During the hardest weeks of the health crisis, the system made it possible to predict certain diagnoses that took time to be confirmed. “Many times I have acted based on clinical history. One patient came with symptoms, we did the test, but it was negative. Despite this result, I asked for progressive symptom reviews. Radio and scanners helped with decision making, says Arthur Lobo.

Claudia Leite, professor at the Department of Radiology and Oncology at USP, confirms: “Very often we have had patients with changes in the images, without confirmation of the diagnosis (by test). In these cases, we would take the measures intended for Covid-19. Later we got confirmation that it really was Covid-19. By the end of July, the RadVid-19 had already made it possible to analyze 10,700 radios or scanners. The reliability of the results is assessed.