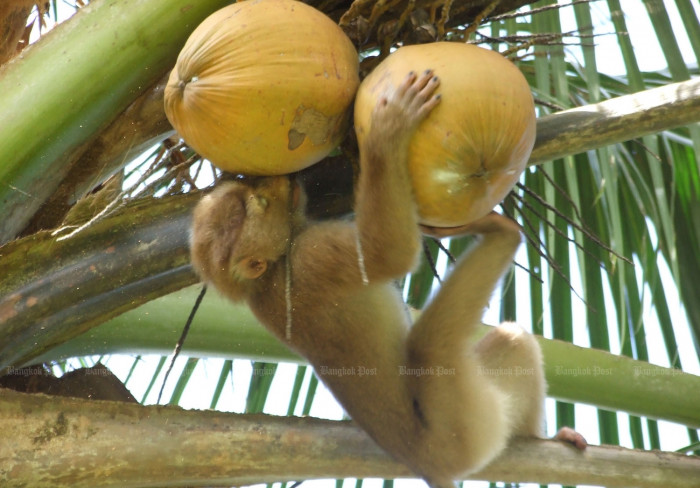 A trained macaque picks coconuts from a tree in Chumphon Province. An adult macaque can collect between 900 and 1

,000 coconuts a day, compared to about 80 for a human picker. (Bangkok Post File Photo).

Major Western retailers have begun to withdraw Thai coconut products from their shelves amid accusations that coconuts were picked by inhumanly-treated monkeys.

The monkeys are attracted by nature and are trained to pick up to 1,000 coconuts a day, according to People for the Ethical Treatment of Animals (Peta).

The animal rights group said that pigtailed macaques in Thailand were treated as “coconut machines”.

Peta said monkeys are used by farms that supply two of Thailand’s best-known coconut milk brands, Aroy-D and Chaokoh, which are exported to many countries in Europe and the United States.

“Following Peta Asia’s investigation, more than 15,000 stores will no longer buy these branded products, while the majority will no longer buy any coconut products that come from Thai monkey labor,” the group said on its website.

In the UK, Waitrose, Ocado, Co-op and Boots have pledged to stop selling some coconut products from Thailand, the BBC reported.

A spokesman for the giant retailer Tesco told the BBC: “Our own brand of coconut milk and coconut water does not use monkey labor in its production and we do not sell any of the branded products identified by Peta.

“We do not tolerate these methods and would remove any product from sales that is known to have used monkey labor during its production.”

Morrison’s chain said it had already removed products made with monkey-picked coconuts from its shelves. Sainsbury’s told the BBC: “We are actively reviewing our product range and investigating this complex issue with our suppliers.”

Peta said it had found eight farms in Thailand where monkeys were forced to pick coconuts for export around the world.

Male monkeys can pick up to 1,000 coconuts a day, Peta says. It is believed that a person can choose about 80.

The group said it also discovered “monkey schools”, where the animals were trained to pick fruit, as well as cycling or playing basketball for tourists’ entertainment.

“The animals at these facilities – many of which are illegally captured as infants – exhibited stereotypical behavior that indicates extreme stress,” Peta said.

“Monkeys were chained to old decks or confined to cages that were barely large enough for them to turn in.”

“A monkey in a cage on a truck bed was seen delicately shaking the cage rods in a senseless attempt to escape, and a screaming monkey on a rope desperately tried to escape from a handler.”

In one case, the organization was told that monkeys would get their canine teeth out if they tried to bite handlers.

“Peta urges decent people to never support the use of monkey labor by beautifying coconut products from Thailand.”

TikTok, Twitter is starting to talk about a combination, reports WSJ

Taxing the rich will not save the federal program