EAST LANSING – For a few days in the middle of March Madness, the talking heads of the college basketball world fixed and took sides on Tom Izzo and Aaron Henry's back-and-forth sideline confrontation.

It remains baffling how and why that moment morphed into such a national flashpoint. But it remains the pivotal moment when Henry realized his importance to Michigan State basketball – and vice versa.

From being a freshman playing a handful of minutes a game to being thrust into starting duty and playing more than 30 minutes a game in the postseason. 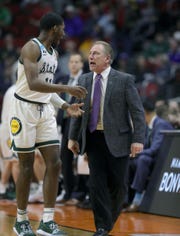 “I'm gonna accept everything he says, because he doesn't want anything for me but the best. ”

Henry enters his sophomore season as a returning starter who blossomed into a significant player for the Spartans, who went 32-7 last season en route to winning Big Ten regular-season and tournament titles. That was before the first-round NCAA tournament game against Bradley in Des Moines, Iowa, when TV cameras caught Izzo yelling at Henry.

CBS replayed it over and over and the video went viral, much to the surprise of coach and player. It was a timeout lesson for Henry about the need to play hard every possession.

He responded by averaging 10.4 points and 5.3 rebounds, shooting 58.3% overall and 40% from 3-point range in the NCAA tournament. That included a career-high 20-point game in the Spartans' Sweet 16 win over LSU.

"There are things that everybody learned, including me," Izzo said Tuesday. “But at the same time, if I had to do it over again, I wouldn't change one thing because there had to be a reason. And there comes this line of demarcation in everybody's life where you're going left or you're going right.

“If you watched Aaron Henry from two plays later in that game for the rest of the year, you looked at his summer – and I told him the other day, I just laughed about it. I said, 'Aaron, I don't think I've ever talked to you about going hard. I don't think I've said a word to him all summer. '”

James Henry said he was not surprised at how his son handled being yelled at by Izzo. The tough-love approach is what he wanted for Aaron and something he watched thrive under in the AAU circuit and at Indianapolis powerhouse Ben Davis High.

How Aaron patiently handled the ensuing national media crush, though, is what really made his father proud. Because he saw his son practicing the two words he impressed upon him as a child: Empathy and deliberation. 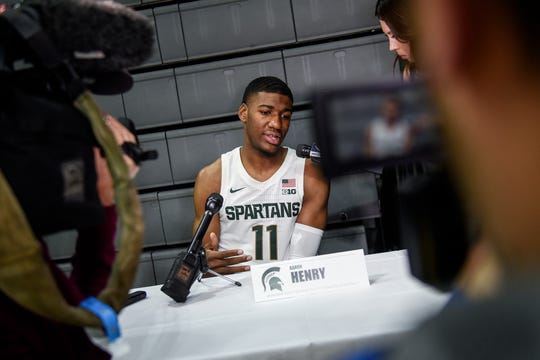 "Aaron's been getting his ass kicked since he started playing AAU ball," Henry said Tuesday. “You always have to be the type of parent where the best thing to teach a kid is to just be straight out with him, because the world isn't going to cut you any slack. You could drop dead in the middle of the street or wherever else, and they may step over you instead of running over you, but won't stop. And the best way for you to deal with live is to find your groove, find your rhythm and roll with the punches.

Aaron Henry's rhythm was up and down as a freshman, but in large part because injuries to others forced him into being an urgent contributor.

The 6-foot-6, 210-pound swingman began the season expecting to be a role player off the bench. And what he was for the first 13 games, averaging 4.3 points and 2.7 rebounds in 14.5 minutes. Then came Joshua Langford's season-ending foot injury. And ongoing back problems for Kyle Ahrens. Suddenly, the two players in front of him were missing.

Henry went on to start 22 of the Spartans' final 26 games, including the final 16, as his minutes climbed to 25.8 per game. He averaged seven points and 4.4 rebounds after Langford's injury, on-the-job training to become a full-fledged starter entering this season.

"It's very tough," Cassius Winston said of Henry's early role. "One game you might have 12 points and the next game you might have four, just because you don't know how to play at that level, you don't know how to play for that long or carry yourself and keep that energy going for that long. You have to make an adjustment. Luckily, he got thrown out there when he did, because he was able to grow, grow, grow all the way towards the end of the season. He was able to consistently do that and carry that over into the next year. " 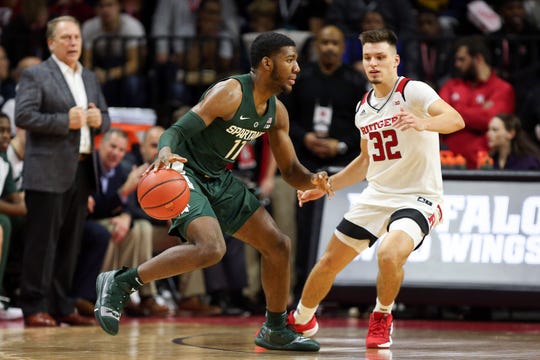 Izzo's finger started wagging again Tuesday when talking about Henry, but in a good way. Almost in an I-told-you-so-less.

"I better watch waiving my finger, I'm gonna create problems," Izzo joked. “You'd better give Aaron some credit that, from Day 1, he didn't even blink at that. Never complained about it, he said he deserved it. … I didn't take him out of the game. I didn't bench him. I just sat there and told him that he'd better learn how to run harder and play harder.

“Boy, if there's ever a time that I was proud of a kid, his next two weeks were phenomenal. That's OK, because that's a short term. His spring, summer, and fall have been off the charts as far as his work ethic. "

James Henry said he doesn't want Izzo to back off Aaron," because sometimes he needs that tough love. "And he knows his son is ready to take that next step to where the cameras are coming to him more and more for how he is playing instead of something happening on the bench.

Neither does Aaron Henry.