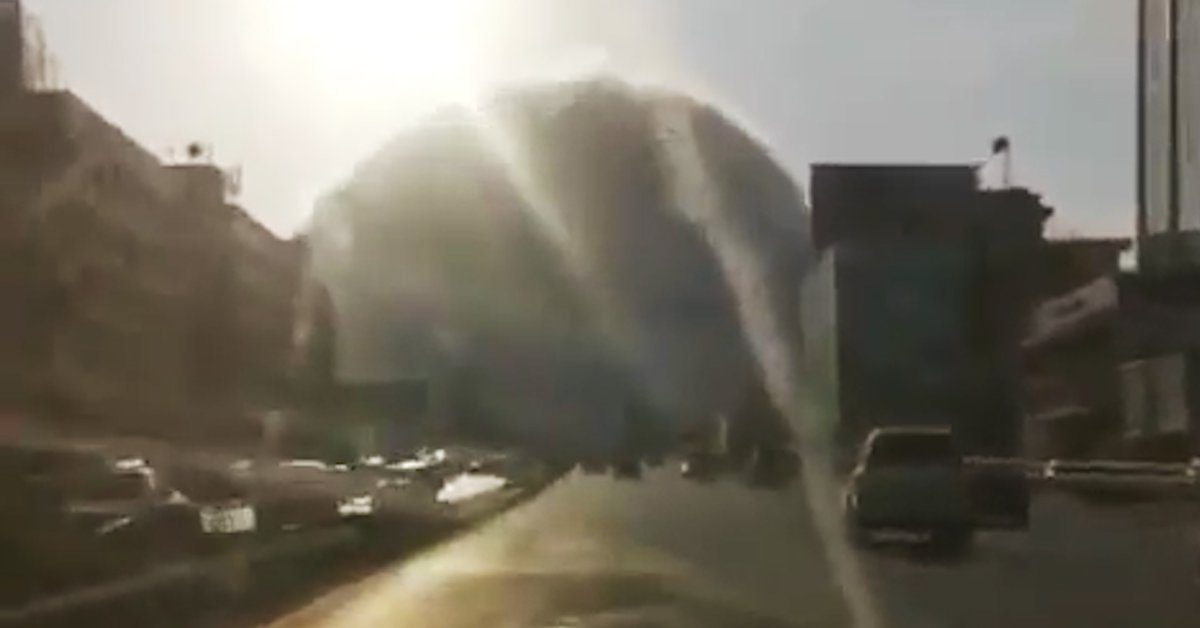 At least 135 people have died and more than 5,000 have been injured due to the explosions recorded on Tuesday in the port of Lebanon’s capital, confirmed by Health Minister Hamad Hasan, who stressed that dozens are still missing.

And it is in the midst of the chaos that horrific images continue to be revealed by witnesses who managed to capture with a camera the size of the eruption in Beirut.

One of the most impressive films was shot a person driving his car down a highway in the Lebanese capital and filming the huge column of smoke which had generated the first explosion until the biggest explosion occurred.

The sequence shows the colossal size of the mushroom cloud, which covers the sun and darkens the area for a few moments, and the ruthless force of the shock wave which causes the camera to drop and the recording to stop.

According to various reports, tremors from the explosions can be felt in the Lebanese cities of Tire and Sidon and even on the island of Cyprus, 240 kilometers away.

The search and rescue work for survivors in Beirut has continued during the early hours of Wednesday but slower due to continuous power outages caused by the explosions.

Given the situation, the government has decided to emergency for two weeks in the city, while Information Minister Manal Abdel Samad has confirmed the establishment of a commission of inquiry that will present its findings within five days.

It has also said that the emergency in Beirut, which has also been explained disaster zone, It can be extended if the authorities deem it necessary, as reported by the Lebanese news agency, NNA.

Another person also took the explosion from his vehicle

On the other hand, Abdel Samad has revealed it The CEO has promised to import the amount of corn stored in the port, the main point of entry and exit for food and materials in the country, after its destruction due to the explosions.

The government has also announced the launch of a glass import mechanism for reconstruction, as well as a restriction on sales prices for this material in the country.

The causes of the explosions are still unknown, although local media have reported that they occurred in an area where there are layers of explosives. Right now, the main hypothesis is that the 2,750 tonnes of ammonium nitrate collected in one of them exploded due to the uncertain safety conditions there.

The consequences of the explosion in Beirut from a drone

The director of national security, Abbas Ibrahim, has explained it Explosives seized by the ports of Beirut for several years are stored in the portAlthough he has insisted on waiting for the conclusions of the investigation before continuing the causes.

In this regard, the governor of Beirut, Maruán Abud, revealed on Wednesday this year MTV than There was a report from 2014 that warned of the possibility of such an accident in the port.

Prime Minister Hasan Diab confirmed the accident hypothesis on Wednesday, reiterating that it was “unacceptable” that there were 2,750 tonnes of ammonium nitrate stored for six years in one of these warehouses, after which he claimed “the greatest sanctions for those responsible”.

With information from EuropaPress

“Mom, I’m scared”: the moment a girl and her family are shocked by the explosions in Beirut

They thought that what was happening in Lebanon was just a fire and they filmed: “Something bigger exploded, my god!”