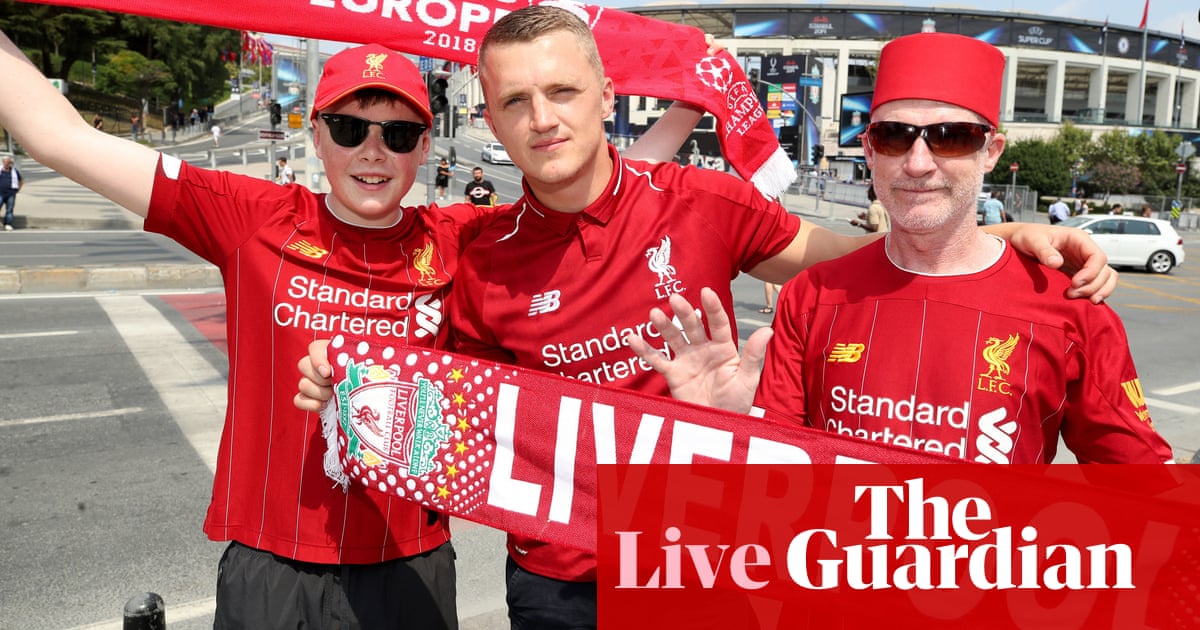 "It's a quaint concept this" needing time, "but like that old zinger" the social contract "I wonder if Chelsea fans have now changed with the culture and would accept that if this doesn't work in the next couple of weeks then the trapdoor into the waiting taxi is fine by them, "Ian Copestake says.

" Besiktas Park? "Peter Oh says . “Is that where Loris Karius was loaned to? Probably in the stage, right? Well, nothing against Adrián, but couldn't Kloppo slap some gloves on the much-maligned German keeper, nudge him onto the field and thereby give him a shot at European cup final redemption? ”

Frank Lampard speaks! "I spent last year winning the Europa League, they fought for this. We want to win it. The lads are ready. The players who got us here last year deserve a crack. "

Jurgen Klopp speaks! " You have to consider all the different circumstances. Maybe we have to go a little longer. It all has to be involved. ”

Liverpool make a few changes to the side that beat Norwich last Friday. In come Joe Gomez, James Milner, Alex Oxlade-Chamberlain and Sadio Mane, replacing Trent Alexander-Arnold, Gini Wijnaldum, Roberto Firmino and Divock Origi. Meanwhile former West Ham goalkeeper Adrian is in for the injured Alisson, while Naby Keita is out with a thigh strain.

Chelsea have a more experienced and conservative look to them than they did against Manchester United. In comes N'Golo Kante as part of a midfield three, Christian Pulisic makes his first start and Olivier Giroud is up front. The players who drop out are the youthful Mason Mount, Ross Barkley and Tammy Abraham.

You also notice that the referee is Stephanie Frappert, who's making history by becoming the first woman to officiate a major men's European match. She refereed the women's World Cup final in July and has taken charge of Ligue 1 matches since April.

Hello. The news cycle has a habit of moving at dizzying speed in football. Three days after being crushed by Manchester United, Frank Lampard is in Istanbul and has a chance of winning a European trophy in his second match as Chelsea's new manager. Take that, Jose! In your shiny studio. On that sofa. Doing your punditry up there. With Lampard in the dugout now and though facing criticism since Sunday's defeat it is possible to see what he is trying to do at a club laboring under a transfer embargo and wounded from the sale of Eden Hazard to Real Madrid. If the youngsters develop then Chelsea could have quite the side on their hands in time.

The problem with that theory, though, is that this is a club that doesn't have the strongest history in the patient department – and another complication is that the competition at the top is growing ever fiercer. Time was when Chelsea sat at the top of the tree in England, competing for titles and largely able to sign whoever they wanted. But this evening they face opponents who are much further along in their development, which feels a strange thing to say given that Chelsea won the league two years ago and Liverpool … well, we know when Liverpool last won the league.

Twenty-nine years ago! But that wait stung quite so much at the moment. Not after they ran Manchester City so close last season and went to Madrid to collect their sixth European campaign. They are clearly moving in the right direction under Jurgen Klopp, even though they had a quiet summer in the market, and are bound to challenge for major honors again. Chelsea, on the other hand, are in a transitional period. Lampard needs time, no matter what happens here, in the first ever Super Cup between two English sides.