Lions training camp observations: Much to like defense against Deshaun Watson 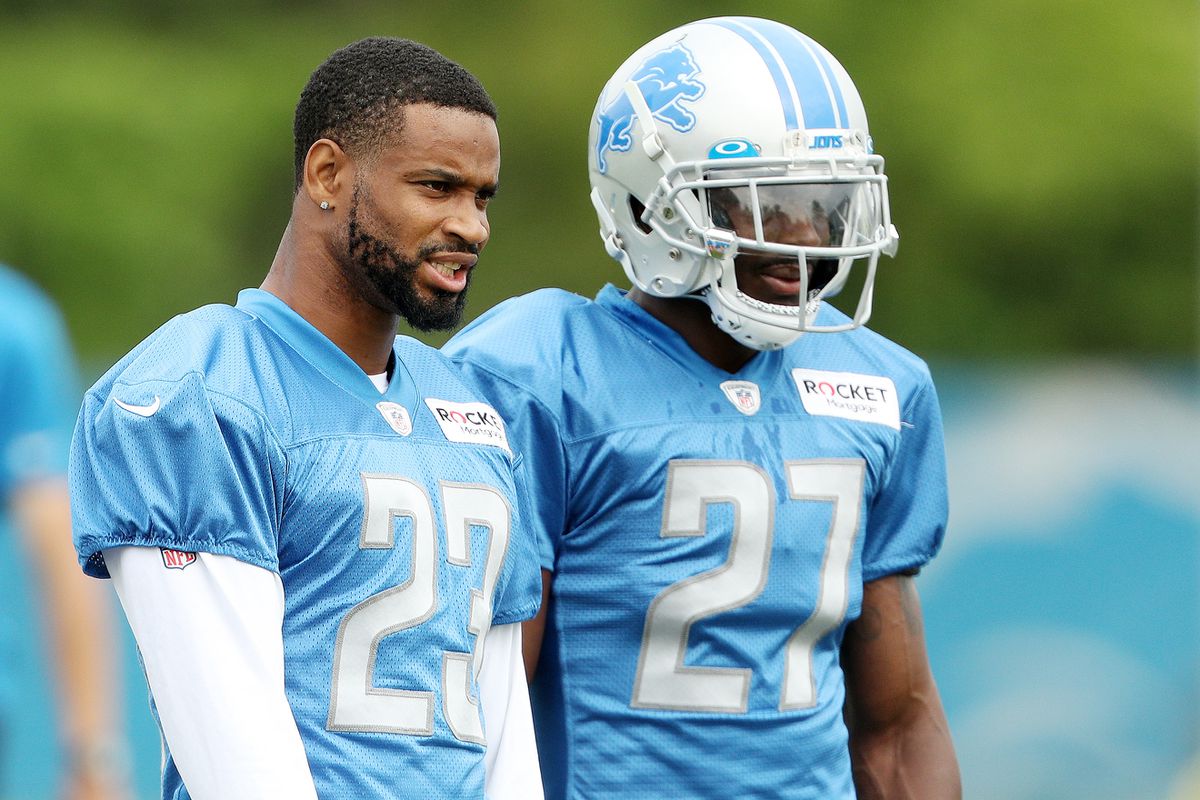 HOUSTON – Why unpack training camps and fly across the country to practice in the Texan Camp Sauna?

It took exactly one rope of one-for-them to find the answer.

Darius Slay has dominated the Lions camp, especially in recent days. But getting to see DeAndre Hopkins, one of the finest receivers in the game – perhaps the very best if you think Slay – is a completely different challenge. And sure enough, Hopkins got him with an oblique slant over the middle to open one-on-one on Wednesday at the Houston Methodist Training Center.

But Slay's defense was OK on the game. These drills still prefer the crime, and Hopkins is one of the best in the business. And on their next rope, Slay got revenge by reading Hopkins' path and knocking him off with some physical coverage. Deshaun Watson's passport sailed long and incomplete.

And that's how much of the day went, Hopkins won a rope here, Slay got him there. Say what you get about Kenny Golladay, and there's a lot to be said, but the Lions don't have a receiver as dominant as Hopkins. To borrow from the coachspeak playbook, iron sharpens iron, and Slay was still pushed for all the good work he got after training.

"It goes back and forth all day," Slay said. "He knows it, and I know it, and I'm just looking forward to it, man, because like I said, I need the work. He is one of the best receivers in the game. It's all mutual respect out there. I'm out here to make him better and he's out here to make me better.

"So he's teaching me something new, and I'm trying to help him see something else."

The same could be said of Watson.

The Texans quarterback established himself as one of the best doubles threats in the game last year, rushing for 551 yards and five touchdowns. It only dragged Baltimore's Lamar Jackson and Buffalo's Josh Allen into place.

The Lions will open the season ahead of another double-threat QB in Kyler Murray, but cannot exactly replicate that skill with the guys they have in camp. So getting some work done for a guy like Watson was especially productive for this defense.

"He looks good right now," Slay said. "He moves well, he's fluid. He trusts his guys, and I mean, I would have confidence in (Hopkins) too … It's good for us, good for our defense or our line, our secondary, everyone This is a good week for us, man. "

Here are some more observations from practice: [19659002] – Slay wasn't the only corner that played. Rookie Amani Oruwariye picked Watson off one-on-one, which is really hard to do. There is no rush, there is no schedule, no help. Only mano-one mano. That means the drill benefits the crime greatly. Passport divisions are difficult and eavesdropping rare. and then picked up Watson's pass.

Listen, I know the rookie struggled in the opener for the season, but I beg you not to read anything in it. Cornerback is such a difficult position to learn at this level. Just ask Darius Slay He was benched TV at times as a beginner, and it was like a second round. So Oruwariye, a fifth rounder, is far from a finished product. But he also has the ability and has used the long frame to take some picks in the camp. Consider me fascinated, especially if he is not pushed into action until next season.

– Another corner that stood out: Johnthan Alston. Don't feel so bad if you've never heard the name. He seemed just like a camp body when the Lions signed him a week ago, but made back-to-back pass breakups during one-on-one today. The first, towards the tight end Jordan Akins, actually broke a string of five straight completions by Watson to open the drill. Then he broke up another pass intended for receiver Tyron Johnson. Alston has no realistic shot to make the team, but tip the hat to the kid for going out against a good quarterback. He is on my radar for the exercise group.

– Watson provided an excellent test of what the Lions can expect to see in Arizona to open the season. But the same goes for the heat. I won't give any news here, but Houston is hot in August. My phone said it was already 87 degrees when Matt Patricia held his pre-practice press, and it was around 8:30 local time. Temps were in the 90s during the exercise, and the heat index cracked the 100s.

Give Patricia credit, though, as his team looked prepared for it. Some veterans skipped training, like Marvin Jones and Danny Amendola. But the guys who were out there actually weathered the elements pretty well, and cramps were no problem.

"To make sure we do a good job with our players to hydrate and make sure they are prepared," Patricia said. "We have been trying to stress it over the last 48 hours through the journey – obviously you will be on the plane, it will dry you as well. When we get ready to go today we just have to do a really good job of monitoring everything. I have talked for a long time with coach O'Brien about taking his guidance and his lead when it comes to heat because he's obviously in line with it a bit more than we are. Our sports science staff, our coaches, our doctors, they're really on top of that from that point of view. We will go through the exercise and see how it goes and the big thing for us will really be how we recover tonight, this afternoon and get ready for another day tomorrow. ”

– Lions close end TJ Hockenson left the exercise after to have taken a pass during red zone exercises and did not come back. Coach tested his eyes / sight on the bench, so it is possible that he got tangled in the eye, but he had to keep his helmet and stopped ade remain in the team through the end of training, which indicates that the injury is small. No need to worry until he doesn't train on Thursday.

– With guys like Hockenson, Amendola and Marvin Jones missing team representatives, many young guys got a good job with them. Chris Lacy came on the fourth day in a row with the starters at the receiver, and really looks like a good bet to make the opening day list. Kennedy, the former lacrosse player, got a long look at the slot against Houston. The seventh round picked Isaac Nauta with the top unit in tight ends.

The backup that shone most on crime, but may have been Ty Johnson. He made two more big plays, one where he ran after a touchdown from about 15 yards without being touched, and the other on a long wheel drive. Again, anyone who has been paying attention in recent weeks should not be surprised. He was one of the stars in the opener against New England, when he ran three times for a team-high 22 yards, plus got a 13-yard pick up with penalty. Yes, this kid makes the team.

– Mike Daniels was nowhere to be found. That doesn't necessarily mean he wasn't here – with three scattering fields and no elevated place to watch practice, it made tracking players difficult – but I never found him. And he really wasn't on the pitch. Which is strange, because he just said last week that he would practice in Houston. "I will be able to do some striking with the guys down there when we come to Houston," Daniels told NFL Network. "It's a process. Honestly, I could play (in the early season) tomorrow, but it's just about being smart. Just keep strengthening everything, keep getting fit and everything. So it's just being smart. But i "I will be out soon. "

Daniels signed with the Lions on July 26 and was expected to need some time to be ready to go. But three weeks? And he still lacks training? When he said he would be back? Expect Patricia to be asked this on Thursday, because it's weird.

– Other players I didn't see practicing included Jarrad Davis, Da & # 39; Shawn Hand, Teez Tabor, Snacks Harrison, Tyrell Crosby and John Atkins. [19659002] – While the defensive line remains briefly overhand, I was impressed by the offensive line's ability to handle a truly talented Houston front. Rick Wagner had some trouble managing JJ Watt, as you might expect, but the rest of these guys kept their own one-on-one and two-on-two. I was particularly impressed w with Joe Dahl, Frank Ragnow and Graham Glasgow on the interior. They weather out Hoston's stunts and games pretty well.

– One offensive lineman who had some problems was backup Luke Bowanko. When he drew a flag for a wrong start during group exercises, he was immediately sent off the field by an annoyed Patricia and ran a lap around the training field. Patricia did more screaming practice during this practice than I can remember in most others, but then again, maybe I noticed it more because reporters were so much closer to the action than we may be in Allen Park.

Tomas Nido drives the Met’s win over the Nationals