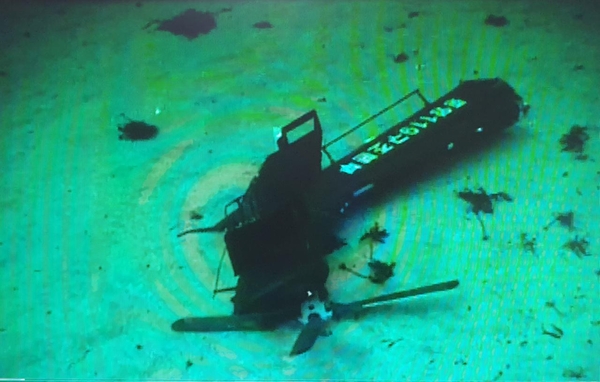 The black box, which reveals the cause of the accident, is believed to be within the tail wing of the accident helicopter. Search officials found tail swings 78 meters south of Dokdo's eastern island during the fourth day of the incident, but have failed to lift them on the 1

3th day. The search for missing persons is more important than the black boxes.
BEA issued an opinion to the Accident Investigation Board requesting an early recovery of the accident helicopter Eurocopter 225 black box that sank in the sea this morning

BEA's letter to the Accident Investigation Committee stated that "in the case of an unintentional black box over 50 m deep, deep exposure to the sea can cause data damage due to water pressure." It is necessary. "

The Accident Investigation Committee also sent a BEA request to the search authorities, such as the coastal police, in the morning to request an immediate rescue. An official from the Department of Land, Infrastructure and Transport said: "BEA requested the collection of the black box and sent a second letter of cooperation to the search authorities to get the black box as soon as possible." It is necessary equipment to analyze the cause of accidents. "

Bea is an authority participating in investigations of French air accidents occurring abroad as well as all air accidents occurring in French territories and airspace. At present, four organizations are participating in the investigation into the cause of Dokdo's accident helicopters, including the two countries' investigative committees, the helicopter manufacturers Airbus and the engine manufacturer Safran. They are conducting a basic investigation on the helicopter's fuselage, but they must have a black box to examine it. The helicopter's aircraft body has been moved to the hangar at the Ministry of Land, Infrastructure and Transport and is investigating the cause of the accident. / Yonhap News “/>

The hull of the 119 central rescue helicopter crashed near Dokdo arrived at Seoul Gimpo airport on the 6th afternoon. The helicopter's aircraft body has been moved to the hangar at the Ministry of Land, Infrastructure and Transport and is investigating the cause of the accident. The helicopter crashed at sea about two or three minutes after taking off an emergency patient from Dokdo at about 11:30 pm the 31st of last month. In the media interview, Shin Jung-beom, a Gyeongbuk provincial police officer who witnessed the scene, said, "The fire helicopter showed an abnormal symptom immediately after takeoff and it went down to the South Sea without falling to the land." "There was no explosion or flame."

The Accident Investigation Committee believes that the helicopter may have crashed due to external factors such as device or wind defects, but it is difficult to predict until the black box has recovered. As requested by the BEA and the Ministry of Land, Transport and Maritime Affairs, search authorities, including the maritime police, are expected to review the helicopter's lift time.

But we did not think about the time to lift the swing wing (black box), he said. "As long as I got a letter from the Accident Investigation Committee, I would discuss the recovery of the black boxes."

An underwater investigation into the Sun Seascape was found approximately 600 meters south of Dokdo Island. The search authorities then lifted the fuselage three days later. A missing person in the fuselage was lost during the rescue process, but was reinstated five days later.

According to the Griffin investigation, there is a temperature difference between Ha Tae-kyung and LCK.