Breaking News
Home / Italy / Simplifications, the decree of the Council of Ministers: from construction sites to public administration

Simplifications, the decree of the Council of Ministers: from construction sites to public administration 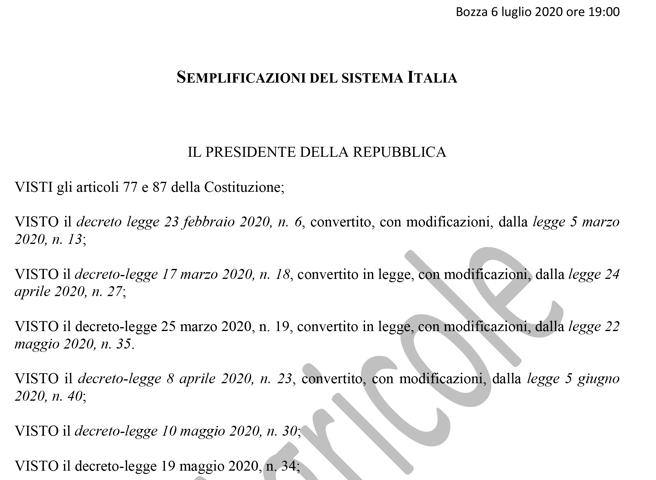 From the Code of Contract to Abuse of Office, where CDM reached an agreement overnight (according to the inserted rule, as far as we know, Italia Viva has expressed its reservation). From the circular economy, the national parks and renewable energy through the extraordinary commissioners to be appointed to follow infrastructural interventions characterized by a high degree of complexity, up to the national reform program, the budget adjustment, the digitization of public administration. All in one night.

So a ministerial council that must go ahead and make decisions very important for the next few months, he called late at night (21

.30, but then starts at 23) and continues all night. Many and important topics on the agenda, beginning with the simplification decree that still agitates the majority. It is evoked from all sides – necessary and epochal change (Giancarlo Cancellieri, Deputy Minister of Cinque Stelle); the country needs a shock plan (Elena Bonetti, Minister for Italia Viva) – but in the end, Prime Minister Giuseppe Conte was forced to find the square between the various positions and rigidity by seeking a cease-fire with the formula of secure understanding. And the same leader of the Democratic Party in the House Graziano Delrio explains that the ministries will then have to leave their leadership, which makes it clear that last night was only the first half of a long negotiation. However, Luigi Di Maio, leader of the barbecue and foreign minister, turns to greater security and announces the approval of the decree, and speaks of another important step for the future of this country.

And the day of his 34th birthday, Di Maio also seems to want reduce tension in recent days by telling: We are in the Council of Ministers with the old friends with whom we have built all this and we are struggling with every day to improve this country.

The simplification decree, 48 articles in less than 100 pages, intends to go in this direction. To achieve an acceleration of investment and infrastructure, but also to introduce procedural simplification measures and support and dissemination of digital administration, and to adopt simplification measures in the field of enterprise, environment and green economy, in order to cope with the economic consequences of the Covid epidemiological crisis -19. And while simplifying the contracts on the Genoa model, positions within the majority are far from homogeneous, the digitization of public administration agrees thanks to the package that provides the increase of digital services for both citizens and for companies that accelerate exercises with PA through digital identity and the dedicated Io app, the most open and fastest communication between databases.

But the Council of Ministers also has the national reform program, which serves to go to Europe with a credible reform plan and the day before the European tour of the premiere (from today, oath) receives the clear signal from the CDM. Approved, explain government sources, including the bill for adjusting the budget and the state report. But the third budget gap in 2020 is close: another € 20 billion to secure containment measures to combat the crisis created by the epidemic. Time is running out. The permit must arrive by the end of July.

Additional staff, here is the distribution of funds to hire teachers and ATA. Order [PDF]

Viviana Parisi disappeared with her son: find clues, search two lakes. “He suffered during the lockdown”