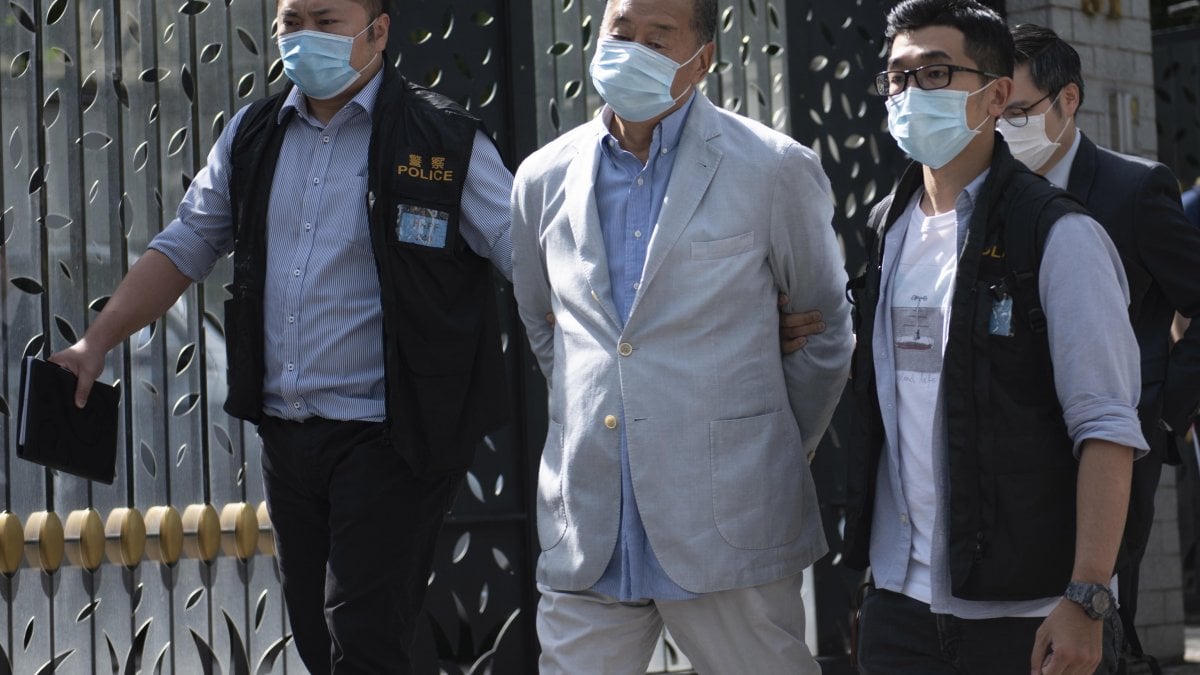 BEIJING – On Monday morning, Hong Kong wakes up shaken by a massive police operation against some symbols of the city’s opposition. Shortly after 9 a.m., agents showed up at the home of Jimmy Lai, a publishing mogul who openly hid in the Democratic camp and arrested him on suspicion of violating the new National Security Act introduced by Beijing. Meanwhile, over a hundred police officers have entered the headquarters of Next Digital, the company owned by Lai that publishes the tabloid. Apple Daily, very clearly in terms of supporting the protests and criticizing the Beijing establishment and China. The agents began searching the company’s and newspaper̵7;s offices, filming photos of journalists and posting them directly on Facebook. Just over a month after its entry into force, national security legislation has had an impact on the hitherto free publishing world in Hong Kong, a further sign that the central government is pressuring the city.
Foreign

Jimmy Lai, 72, has long been in Beijing’s sights. In recent months, Chinese regime newspapers have repeatedly included him among the activists of the “Gang of Four” in Hong Kong, a revival of the four “enemy of the people” politicians condemned by China after Mao’s death. Born in mainland China, arrived in the English colony as a child, in the 1980s Lai founded a clothing company, Giordano, amassed a significant fortune, partially reinvested in the beginning. Apple Daily, biting tabloid with releases in Hong Kong and Taiwan. Last year, as always after 1989, Lai supported the protests for democracy, and took to the streets regularly during marches. In February, he had already been arrested with other symbolic figures in the Democratic camp for participating in an unauthorized assembly. Near the entry into force of the new law he had interviewed Reuters where he said he felt like a target, but expressed his desire to stay in the city. He had also opened a Twitter profile. Regim newspaper Global Times he called his tweets “evidence of subversion.”

by our correspondent FILIPPO SANTELLI

The charges against him, according to what South China Morning Post, according to information about cooperation with foreign forces and fraud. Last year, Lai toured with other Hong Kong activists in the United States, where he met with Secretary of State Pompeo, Vice President Pence and President of the Pelosi House. In theory, the national security rule is not retroactive. Two of Lai’s sons and two Next Digital executives have also been arrested; Hong Kong police have so far confirmed seven arrests, all linked to the law written to protect China from “secessionist” and “subversive” forces.

Lai is the most prominent person arrested under the new law, which, among other things, does not give anyone bail. To date, about fifteen people have been arrested, including some youths from an unauthorized congregation, for showing signs praising “freedom”, and a group of students from a pro-independence movement, between the ages of 16 and 21. Since its entry into force, the pressure on Hong Kong’s freedoms and autonomy is becoming clearer every day. Last week, CEO Carrie Lam officially announced a one-year postponement of the election to the Legislative Council, the local parliament, which saw the Democrats favored, for health reasons.

Hong Kong, Democratic candidates are removed from the polls

by our correspondent FILIPPO SANTELLI

Twelve opposition candidates, including Joshua Wong, had already been disqualified for their positions. It is now up to the Beijing Parliament to decide how to fill the “void” created by the vote, given that Parliament will end its elections at the end of September. The decision should be announced by the hour: we are moving towards an extension of the current assembly, in which the pro-Beijing forces are in the majority. On Friday, the US government imposed sanctions on nine Chinese officials, including Carrie Lam, responsible for theoretically guaranteeing autonomy in Hong Kong.

Coronavirus in the world: infections, updates and all the news about the situation

Medjugorje, last message to the visionary Ivan: “If you do not pray ..”