Budweiser and MillerCoors have been struggling for months for corn syrup 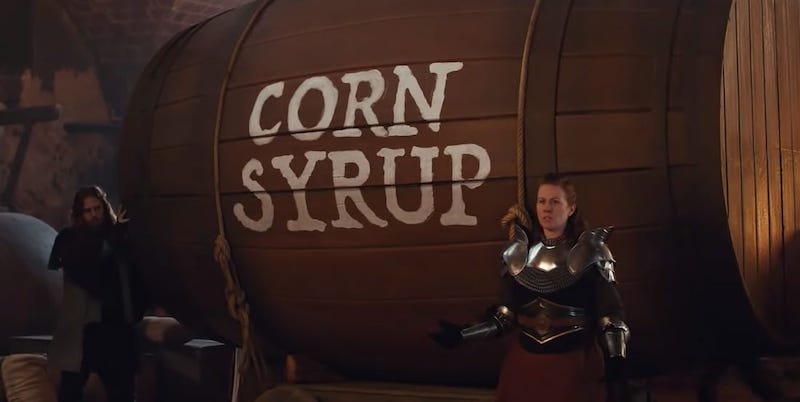 On February 3, 2019, the 53rd edition of SuperBowl, the finals of the American Football Championships, was broadcast live by more than 98 million viewers in the United States. As every year, companies from all over the world have been struggling for the coveted advertising spaces for various game breaks and among the ads that have been transmitted, it is still talked about months later. The ad was created by the multinational Anheuser-Busch InBev, producer of Budweiser beer, to promote Bud Light beer, a lighter version of the classic pils .

The ad is in a kind of middle age, where a castle is associated with every beer brand. One day at Budweiser Castle comes a lot of corn syrup, but the master of the castle specifies that Bud Light is not produced with that ingredient, unlike Miller Lite and Coors Light beer, and that load must therefore have come for error. Thus, the Budweiser Knights go first to Miller's castle and then to Coors to deliver the barrel to them. The ad ends with the slogan "Bud Light, made without corn syrup".

Immediately after the commercial was aired, MillerCoors – the company that produces both Miller Lite and Coors Light, owned by the multinational Molson Coors – sued Anheuser-Busch InBev and accused the company of falsely suggesting that these beers contained corn syrup. To understand why this quarrel must begin with the basics: in the process of alcohol fermentation leading to the production of beer, yeast is used which "eats" the sugar and turns them into alcohol. The most commonly used sugar is barley malt, or sprouted and dried barley, but for light beer, corn or rice can be used.

To make Bud Light, for example, rice is used, while for Miller Lite and Coors light corn is used in the form of syrup. These substances are additives used to facilitate fermentation, but according to MillerCoors, to say that in Miller and Coors, beer "corn" is a misleading claim. In May of last year, a judge decided in favor of MillerCoors and banned Anheuser-Busch InBev from broadcasting again, and finally in September, the company was banned from using the phrase "without corn syrup" on the Bud Light packages. [19659002] The story seemed to be closed here, or at least limited to the dispute over the SuperBowl commercial, but this week a new piece has been added that has turned it into a history of industrial espionage. In a document filed with the federal court in Madison (Wisconsin), Anheuser-Busch accused InBev of two MillerCoors employees for illegally obtaining the prescription for Bud Light and Michelob Ultra, another beer brewed by Anheuser-Busch InBev. [19659002] According to the prosecutor, Martin David Brooks and Josh Edgar, who currently work for MillerCoors but who previously worked for Anheuser-Busch InBev, would have received confidential documents from some current employees that included recipes from Beer Bud and Michelob. In particular, Edgar, before and after SuperBowl, would have had an exchange of messages with an Anheuser-Busch InBev employee, who would send him the pictures of the recipes, with the ingredients, blends and doses of the two beers. The document states that Edgar would have said in the messages that the request for the recipe had been made to him by an important manager of MillerCoors. Anheuser-Busch InBev said he had suspended his employee, meanwhile

Adam Collins, spokesman for MillerCoors, responded by saying that his company is very keen on respecting business secrets and will take the allegations seriously, but added: « if the ingredients are secret, why are they spending so many millions of dollars to tell the whole world what's in Bud Light? And why are they printed in capital letters on the packages? ".

Can I pay € 10,000 in cash without taking risks with the tax authorities?

a new SUV to conquer Europe