How the butterfly discovered daylight 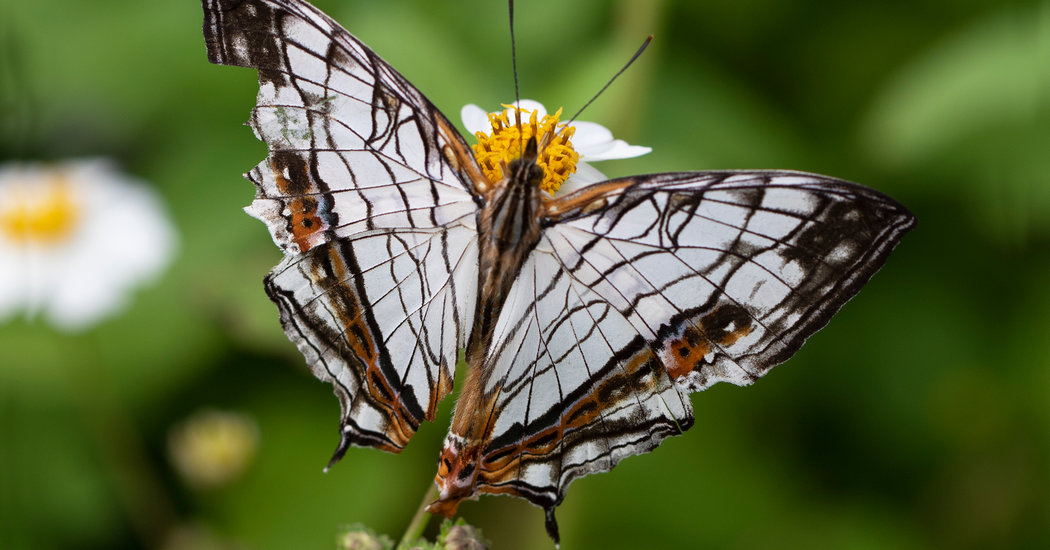 Once upon a time, perhaps some 300 million years ago, a small stream dwelling insect crawled out of the water like a caddis fly and began living on mosses and other land plants. Although dull in appearance, the creature had a glorious future: it would become ancestors of the 160,000 species of moths and butterflies that inhabit the earth today.

Few insect fossils have been found, so reconstructing the steps in this long evolution has been found difficult. A group of biologists have now filled some of the largest gaps in the fossil record using DNA and protein sequences for living insects. On Monday, the team, led by Akito Y. Kawahara, Florida Museum of Natural History in Gainesville, published a paper in Proceedings of the National Academy of Sciences that describes important aspects of the story of how moth and butterflies evolved. [1

9659002] A central part of this story is the furious evolutionary battle between moths and bats. Bats chase moths by emitting sound pulses. But moths were gradually adapted and developed the capacity to detect the pulses and respond with evasive flight maneuvers. The bats were in turn adapted, and new species emerged that used sonar frequencies that the grinders could not hear. New mills emerged in response, equipped with countermeasures: They could transmit sounds that either stuck to the bat's sonar, probably by throwing away the estimate of the mill's distance, or announcing that the mill's tissues were toxic.

A group of moths escaped this deadly arms race by flying during the day; Eventually they gave rise to butterflies. Biologists have long assumed that bats were running butterflies from the night. But Dr. Kawahara's team has concluded that food, not predation, was the more likely evolutionary reason.

The team reconstructed the ancient timeline with DNA sequences of contemporary moths and butterflies. They calculated that the ancestral template appeared about 300 million years ago, at the end of the carbon bottom, well before the oldest known malefossil, which is only 200 million years old.

About 240 million years ago, Dr. Kawahara's team found, most moths ceased to have chew jaws and instead developed tube-like nozzles that could suck up sap and water. The team also determined that the earliest butterflies evolved about 98 million years ago and – a big surprise, since echoing bats only emerged much later, about 50 million years ago. Something other than bats must have turned the butterflies into leaflets of the day.

The most likely means of natural selection was the nectar produced by the many new species of flowering plants, Dr. Kawahara's team believes. Bees were developed about 125 million years ago, and the plants produced nectar to secure them as pollinators. As grinders had already developed straw-like nozzles, a group could utilize the new food source and evolved into butterflies. They changed flight hours from night to day, Dr. Kawahara because nectar is more commonly available during the day when flowers are open.

Lives in daylight, the butterflies changed trolls, brown life for many night mills for a rich color palette, useful for sending amateur signals to friends and warnings about toxicity for predators.

The new DNA task, sampled from all large families of butterflies and moths, has helped to write another piece of developmental history: why hearing developed in moths. Moth's developed ears at least nine different times, in several cases before the development of echolocating bats, revealed DNA data. Maybe ears helped to detect the sound of birds' feet and wings, Dr. Kawahara. Thus, these acoustic faculties were already in place to meet the challenge of echolocation of bats.

Dr. Kawahara said the new genome analysis techniques have enabled him to fulfill a "childhood dream" of reconstructing how these insects became. "My personal passion growing up as a child in Japan and the United States was butterflies and moths," he said.

Maria Heikkila, an evolutionary biologist at the University of Helsinki, Finland, described Dr. Kawahara's study as "a step toward a better understanding." But the dates derived from DNA and fossil are likely to be revised in the future, she said, and a new evolutionary story may emerge.