Hong Kong protesters, without an anthem to sing, create one online 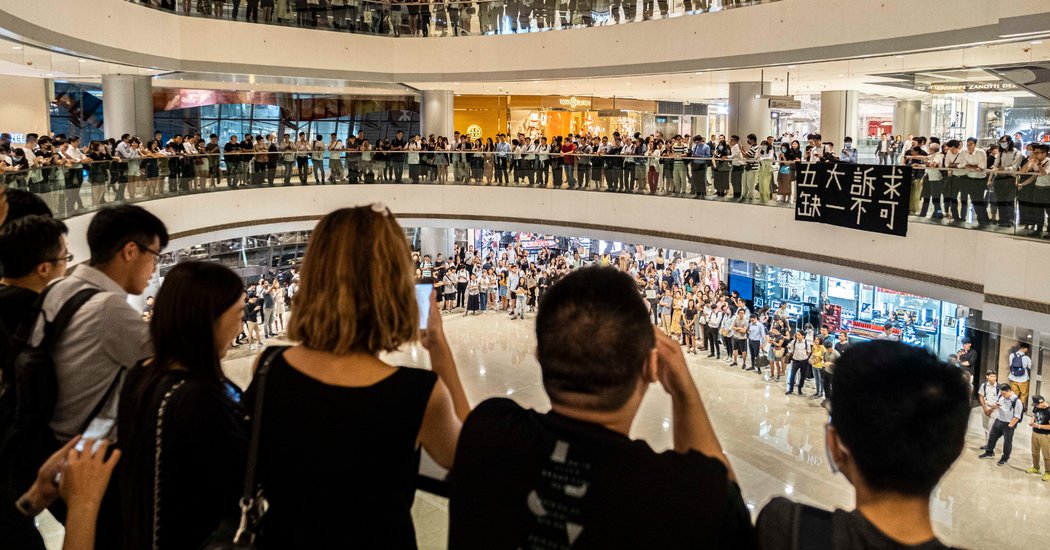 HONG KONG – More than ever before, Hong Kong football fans were not in the mood to hear the Chinese anthem.

Thousands of people at Hong Kong Stadium on Tuesday turned their backs on the pitch as the Chinese anthem played before a World Cup qualifier against Iran, which drowned out the song with boos. Many Hong Kongers have never felt proud to have heard the song – the semi-autonomous territory does not have their own anthem – and they certainly do not now, as mass-democracy protests continue into a fourth month.

But at the stadium's stands and concerts on Tuesday, many hordes of fans sang a song created less than three weeks before, which some protesters have billed as the equivalent of a national anthem. And over the next two days, more than a dozen singalongs occupied malls across the city, some attracting thousands of people.

Written and composed anonymously, then modified in online forums popular with protesters, "Glory to Hong Kong" has the type of brass heavy support and hovering lyrics common to hymns, including the line "May people reign, proud and free, now and more and more. "In a slickly produced video version, an orchestra performs and runs dressed in protest garments – black shirts, helmets and gas masks through a fog machine, intended to evoke images of tear gas.

Some protesters have said that the Cantonese the song makes them feel how people abroad feel when they hear their own anthems: a sense of collective pride in their home Many young protesters have felt contempt for China based on what they see as Beijing's steadily tightening grip since it resumed control of the territory from the UK in 1997.

"The song seems encouraging to Hong Kong," said Milton Wong, 31, a music promoter who has participated in non-violent protests. "And I hope people will act with that courage."

The song's creation reflects the broader movement: greater amount of crowd, but relies on the expertise of professionals in many fields.

A composer named Thomas, who did not share his last name, first published an instrumental version and lyrics on August 26 to LIHKG, a forum used by protesters, and asked others to record it singing. He collected audio versions through Google Drive and collected them to make it sound like a chorus was singing. He adjusted the texts based on suggestions in the forum.

The song was then uploaded to YouTube on August 31 with English subtitles and rousing scenes from demonstrations, such as crowds differing for an ambulance, a child leading a song and a banner hanging on a mountain. The composer recruited video editors and musicians to create new versions.

Singing has been part of the demonstrations since they began: "Les Misérables" hit "Do You Hear The People Sing?" And renditions of "Sing Hallelujah to the Lord," a 1974 hymn by American composer Linda Stassen, have been the most popular.

And it is not the first music to emerge from Hong Kong's protests. Protesters have long belted "Boundless Oceans, Vast Skies", a Cantonese rock song by the band Beyond, in pro-democracy moods. In 2014, "Raise the Umbrella", a collaboration between several Cantopop stars, became the unofficial anthem for the Umbrella Movement, a month-long demonstration of pro-democracies. The song was named Hong Kong's favorite that year.

Lo Hiu Pan, who composed "Raise the Umbrella", said on Thursday that while his song was favored by celebrity singer work, a new song did not have to be a poppy ballad suitable for mainstream to become popular in Hong Kong. Just talking to the political experience at the moment is enough to catch fire and connect people, he said, adding that he thought "Glory to Hong Kong" was "mighty."

"Sometimes a photo, a comedian or a song can spread the message even more useful than a long article," he said.

Ng Kwok Lun, a 30-year-old videographer, was one of hundreds of people for to sing the song on Tuesday at the Tuen Mun Town Center, a shopping mall, saying he felt "a great sense of belonging" that he had never felt when he listened to China's anthem, "March of the Volunteers." in June of University of Hong Kong found that 76 percent of respondents identified themselves as Hong Kongers, while only 23 percent identified as Chinese.)

"I don't think the stories in the texts mean anything to me , "he said of the Chinese anthem." But when I listen to the song in Hong Kong, I understand all the words in the lyrics. It reminds us of everything we have done in recent months, how we come here. "

Tiffany May contributed with the reporting.