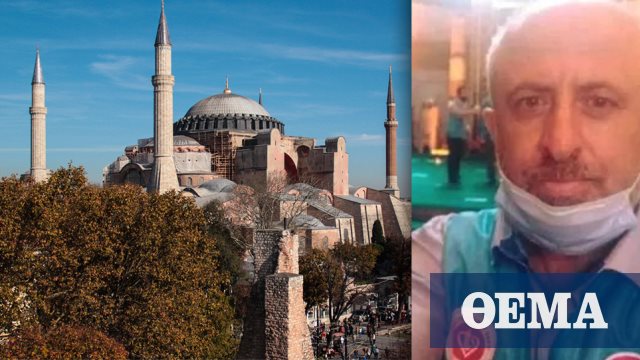 Not in one, not in two, though in at least four languages (Turkish, Greek, Russian and German) The news of Hagia Sophia’s muezzin’s death, broadcast last Sunday inside the temple, caused a sensation – after the first shock – for thousands of internet users.

The news of the loss was broadcast by “Yenisafak” announcing that its muezzin Hagia Sophia lost his life August 2 and due to a heart attack, surprising his loved ones. The muezzin became widely known to the neighboring public when he served in the Hagia Sophia on a voluntary basis from the beginning of the transformation from a UNESCO-protected museum to a mosque, informing Muslims about the protection measures in the temple against coronavirus.

For that reason, he creates his world through Hagia Sophia, where he earns wearing disposable mask, while he was the one who called thousands of Muslims from its minarets to pray even during the pandemic period.

The news of Osman Aslan̵

7;s death caused numbness in the Muslim world, as it took place during his duty, that is, inside the Hagia Sophia, while he comes just a few hours after the first Muslim prayer in the museum, after 86 full years.

Osman Aslan, however, had long climbed to the top of Turkey’s religious pyramid and rejoiced at the absolute confidence in Ali Erbas, head of the neighboring country’s powerful religious directorate, which in turn led the Islamic ceremony. Turkish President, Recep Tayyip Erdogan two weeks ago. The priests who took part in the prayer were counted on their fingers, a total of 3 imams and 5 muezzins, which proved from the “narrow” number of Aslan’s power in Turkey’s Muslim community. This also explains the extent of the loss of Osman Aslan, after receiving much news coverage, at a time when the family of the deceased was personally mourned by President Erdogan. In addition, the Mufti of Istanbul, Mehmet Emin Massa, asked for the memory of Aslan in the central mosque of Sultagazi Sultancifcig and then his body was transported to be buried in his hometown, Siirt Tillo, in southeastern Turkey.

With a tribute from the first moment, he was announced by Aslan’s loss Governor of Istanbul on his personal twitter account according to Yenisafak, where he says:

“We pray to God for mercy on the family and relatives of the Muezzin-Kayyum Uhud Mosque, who died during a voluntary guidance service in Hagia Sophia due to a heart attack.”

We wish Allah’s mercy on Osman Aslan and our condolences to his family and relatives. pic.twitter.com/kfj7oiptaf

The baton from the governor of Istanbul’s condolences was received by tens of thousands of users, who commented on the news in different ways and based on different countries, in a digital range ranging from sincere expressions of grief to associations for the end of the muse in Hagia Sophia and that this happened and linked the event to the … metaphysical and ancient Greek “insult”.

In fact, there are many who interpreted Aslan’s downfall a “sign from god” to transform the temple, from a museum to a mosque and wait for the next sign …

The muezzin who made the opening prayer in Hagia Sophia a few weeks ago died of a heart attack.

Osman Aslan, who was a volunteer guidance service to ensure compliance with the coronavirus measures, died at the Hagia Sophia Mosque, where he served as a volunteer guide on Sunday, August 2. pic.twitter.com/uwks51mk53

“The blasphemous mouse from #HagiaSophia is dead!

Muezzin Osman Aslan died on Sunday, August 2, 2020, a few days after the abusive conversion of Hagia Sophia into an Islamic mosque, suddenly from a heart attack in Hagia Sophia! “

#BREAKING: The blasphemous mouse from #HagiaSophia is dead! Osman Aslan muezzin died suddenly of a heart attack in Hagia Sophia on Sunday, August 2, 2020, a few days after the conversion of Hagia Sophia into an Islamic mosque! https://t.co/hfQSCHf4wb

Weather: Disaster in Macedonia, Epirus, Thessaly on Wednesday – Where will “Thalia” meet today

Explosion in Beirut: Margins for the dozens missing are declining

Hardalias: ‘I did not kiss the priest’s hand – I took off my mask to drink water’ – Politics