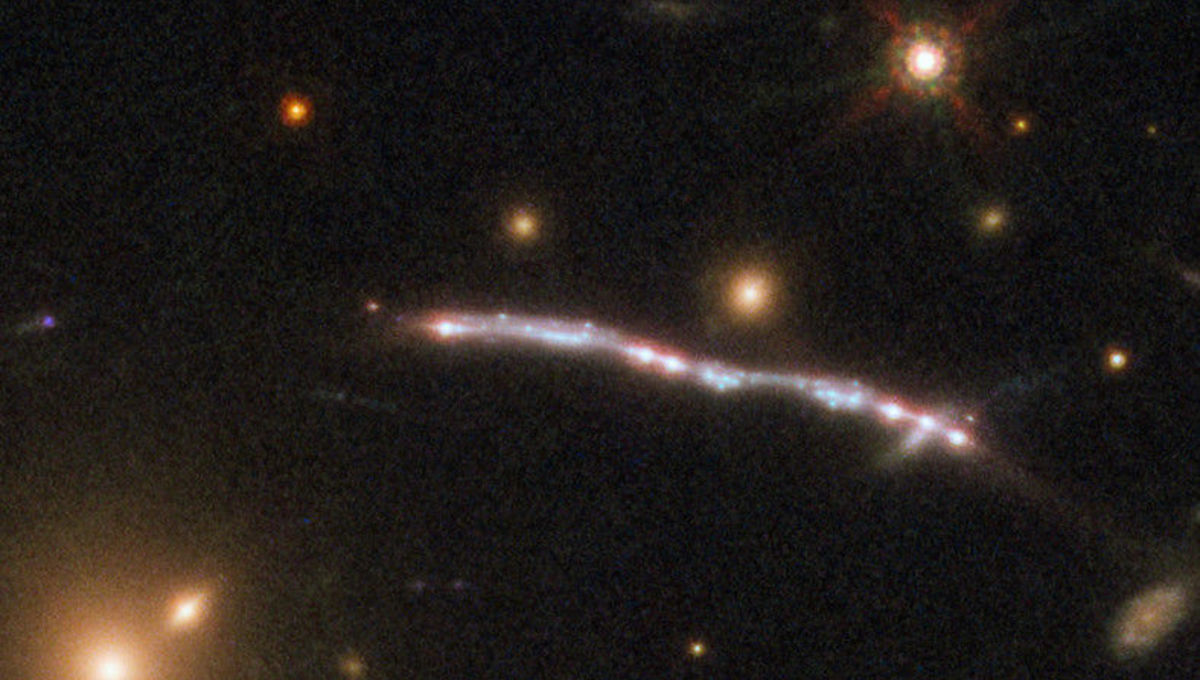 It is difficult to describe enormous galaxy clusters; they are among the largest interconnected structures in the universe (what's bigger? Supercluster which is the cluster of clusters!). Imagine a collection of, oh, say, a thousand galaxies the size of the Milky Way. The sky inside one must be incredible! As many galaxies as you could see with the naked eye …

From Earth, however, we see them far away and study them eagerly. They tell a lot about the universe on its grand scales, and sometimes they also talk about what it was like when it was young. It is due to gravitational lensing a special relativity effect where the total weight of the cluster bends light from an even more distant galaxy behind it, distorts it and makes it brighter.

We have seen this many times before, but a new discovery is very cool: The brightest lensed galaxy ever seen, bent in four different arcs, for a total of twelve separate images of the same galaxy!

Whoa. The cluster is called PSZ1

G311.65−18.48, and the lensed galaxy is PSZ1- 36 ARC G311.6602-18.4624 (no wonder the astronomers called the Sunburst Arc, which I think I will use too). You can see three arches above and to the right of the cluster core, and the fourth is down and to the left, partially hidden by a foreground star. Each arc is the same background galaxy – in the upper arc the six bright "stars" along its length are images of the same small region inside the galaxy, multiplied by the distorted gravity of the cluster! And it turns out to be very interesting.

The little bright spot in the Sunburst Arc is actually a star-forming region: a cloud of gas and dust that actively forms stars. Given the size of the image and considering the magnifying effects of the gravitational lens, it is less than 500 light years across, comparable to large, bright nebulae in nearby galaxies.

Here things are fun. The cluster of galaxies is about 4.6 billion light years away from us, but the galaxy that forms the Sunburst Arc is much more distant, about 11 billion light years away. The light we see from that galaxy therefore comes from when it was very young, just 2.8 billion years after the Big Bang! Things have changed a lot in the universe ever since, so this galaxy is in many ways analogous to even younger galaxies.

It provides an opportunity. Not long after the first stars were formed, the universe underwent a key event reionization when high-energy ultraviolet light from the first stars could fight out of the thick gas and dust of the galaxy and zap the material between the galaxies. That material was opaque, but the light from these stars was so harsh (these first-generation stars could grow to extremely massive sizes and were staggeringly brilliant compared to the stars today) that it ionized the atoms (ripped the electrons from the atomic nuclei). The problem is that these stars are so distant – they would be over 13 billion years away from us – it's difficult to study this event.

It is not clear exactly how that light escaped the galaxies. Was it because the interstellar gas and dust were uneven, which allowed the leakage of UV light? Or was the gas in a thick shell with ducts in it that allowed light through? These two ideas predict different amounts of light coming out as well as regions of different sizes from which it flies. This is where these new observations come in. The astronomers used two different filters with Hubble, one to look at the ionizing radiation (when it comes to us, that far UV light is shifted to near UV, straight into the wavelength range of one of Hubble's many filters) and another to look on non-ionizing light also emitted from the galaxy. By comparing the two, they can limit where the light comes from and how much escapes.

What they found is that the Hubble images look almost exactly what you would expect from a perforated shell, a thick shell with channels that go all the way through it. And it gives credibility to the idea that things like this worked even earlier in the life of the universe, when the first stars lit up the cosmos.

While this may seem a little subtle and even esoteric, this is an important result! It distinguishes between two competing ideas about how gas was distributed in the very early universe, and which in turn tells a lot about things like what galaxies looked like in the early days (and maybe even before the galaxies themselves were formed as discrete structures), how the first stars were born and lived their lives, and on a larger scale how the universe itself was structured when it was an infant.

Keep in mind, there is a clear chain of circumstances from then to now, with some overlap between steps. Big Bang, inflation, first stars, reionization, galaxy formation, more normal stars began to form, stars like the sun formed, they formed planets around them, one of them had life starts on it, evolution did its wonders and now you read these words . Each step in this process is affected by what is before it, so you are literally owed your existence for how the gas in the early universe was distributed.

And now, thanks to a strange shred of relativity and seriousness, we can see that.

esoteric? Sure. Important? Absolutely . And another piece of the literally cosmic puzzle is put in place, which makes the picture clearer.