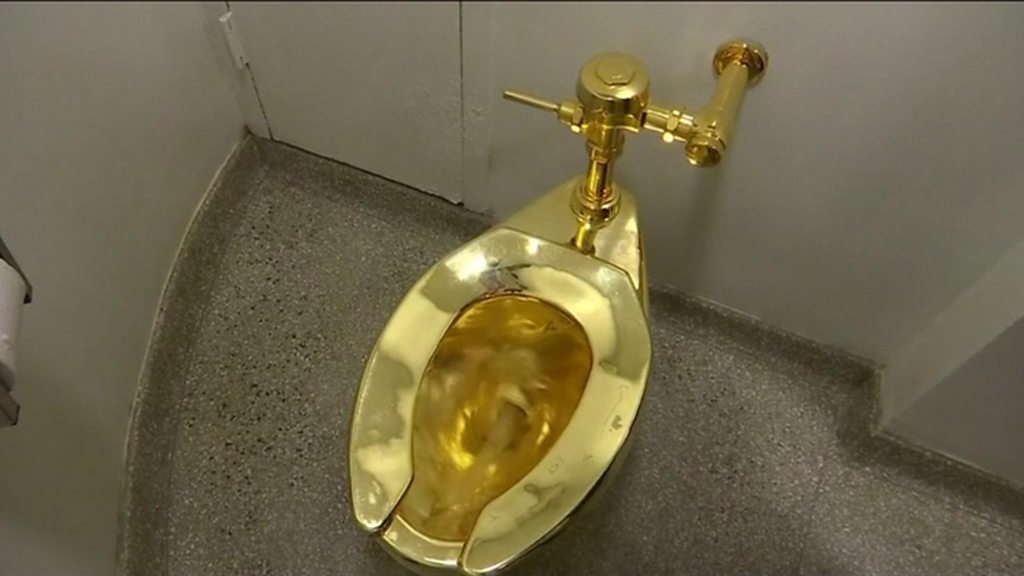 Blenheim Palace's security measures "need to be challenged" after an 18 -carat gold toilet was stolen from the stately home, its chief executive said.

Last month Edward Spencer-Churchill – half-brother of the current Duke of Marlborough – said the toilet would not "be The easiest thing to nick. "

A 66-year-old man was arrested on Saturday in connection with the theft, Thames Valley Police said.

He remains in police custody in the West Mercia area.

The fully-working toilet – entitled America – went on show at the 18th Century Palace on Thursday as part of an exhibition by Italian conceptual artist Maurizio Cattelan.

Visitors had been invited to book three-minute slots to use the throne for its intended purpose.

The burglary caused "significant damage and flooding" because the toilet was plumbed into the building, police said.

Mr Hare told BBC 5 live it was the "first theft of this type in living memory" from the stately home – the birthplace of Sir Winston Churchill – adding it had "a sophisticated security system."

Blenheim Palace, a World Heritage Site, was closed on Saturday after the burglary but reopened on Sunday.

Mr Hare said the artwork – famously offered to US President Donald Trump in 2017 – was a " comment on the American dream. "

" [It’s] the idea of ​​something that's incredibly precious and elite being made accessible, potentially to everybody, as we all need to go when we need to go, "he said.

"And it's ironic really that two days after this was made accessible, it was snatched away." 19659004] Mr Hare said it was "not out of the question [the toilet] would be melted down" by the thieves.

Police said thieves used at least two vehicles in the raid and urged anyone with information to contact them. [19659004] Det Insp Jess Milne said: "We are following a number of lines of inquiry and there will continue to be a police presence in and around the area of ​​Blenheim Palace while our investigations continue.

" We are making every effort to locate the offenders and the toilet that was stolen. "