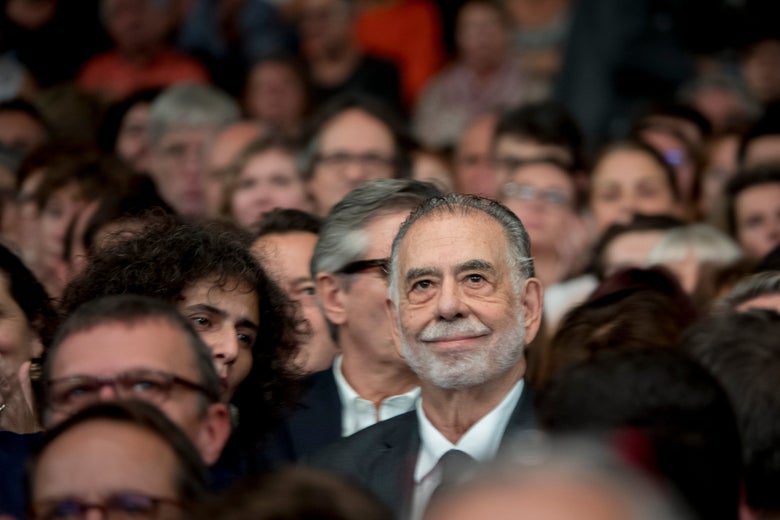 The ongoing battle between New Hollywood and Superhero Hollywood warmed on Saturday, as Apocalypse Now director Francis Ford Coppola told reporters in Lyon, France, that he thinks Marvel movies are "disgusting." Coppola, in France to receive the Prix Lumière at the Lumière Film Festival, joined a phrase started by his fellow New Hollywooder Martin Scorsese earlier this month, when the taxi driver director told Empire Magazine that he had tried to watch Marvel movies but didn't think about them cinema, or at least not "the human bio trying to convey emotional, psychological experiences to another human being." Scorsese compared Marvel movies to theme parks, which can at least be fun, but Coppola won't, according to France 24:

When Martin Scorsese says that Marvel images are not cinema, he is right, because we expect to learn something from cinema. We expect to get something – some information, some knowledge, some inspiration. I don't know anyone getting anything out of watching the same movie over and over again. Martin was kind when he said it's not cinema. He did not say it was contemptible, which I just say it is.

Coppola's remarks have prompted another round of responses from filmmakers and fans on the pro-Marvel side of the aisle, especially Guardians of the Galaxy director James Gunn. When Scorsese made his comments, Gunn tweeted that he was "sad" and reminded the people who picked The Last Temptation of Christ. In the following weeks, he seems to have decided that this is simply a generation conflict and wrote on Instagram on Saturday that John Ford, Sam Peckinpah and Sergio Leone were similarly not appreciated by their elders:

Many of our grandfathers thought that all gangster movies were the same, often called "despicable". Some of our great grandfathers thought the same of Westerners, and thought the films of John Ford, Sam Peckinpah and Sergio Leone were all exactly the same. I remember a great uncle that I liked for Star Wars. He replied by saying, "I saw that when it was called 2001, and, boy, was it boring!" Superheroes are simply today's gangsters / cowboys / outer space adventurers. Some superhero movies are terrible, others are beautiful. Like westerns and gangster movies (and before that, just FILM), not everyone will be able to appreciate them, even some geniuses. And that's okay. 196

Meanwhile, Judd Apatow, who has not yet directed a Marvel movie, made the same argument in a slightly more cruel way:

There are so many different cultural, psychological, and generational conflicts posted in this spit over Marvel movies it's hard to even enumerate them. The least interesting part is the dispute over taste – James Gunn likes to watch Marvel movies, not Martin Scorsese – which is a waste of everyone's time. Another part, somewhat less tedious, is the systemic way in which Marvel defenders treat criticism of the MCU's mode of production – the slate-devouring budgets, the multi-film contracts, the heavy-handed franchise management – as a dispute over taste. Then there's the fresh front, because bloody as always as fans of superhero movies, the dominant cultural form of the age, once again reveals that their confidence in their own tastes is so fragile that they get angry when their opinions is not held unanimously. There is the camp "the plague on both your houses" and claims that Scorsese's gangster movies and Guna's superhero movies are rotten fruits from the same poisonous masculine tree. There is the usual generational conflict of "makes dad finally love me" which is an inevitable part of all the conversations between older statesmen and future statesmen. And, of course, there are people who place themselves in some way above the crisis in insurmountable news posts, while they quite clearly lean on one or the other side based on nothing but their personal taste, which again is by definition not subject to meaningful dispute .

In other words, although there is no evidence that this argument about Marvel films will ever be a meaningful or interesting conversation that improves anyone's understanding of filmmaking, art, commerce or life in general, we can expect that it should continue in an eye-hardening volume for the rest of our lives, sometimes rising to the level of "mildly entertaining" of bombast alone. Keep an eye out for next week's installment, when we find out what Peter Bogdanovich was thinking about Avengers: Age of Ultron as Marvel Discourse enters phase four!

Who is Daniel T. Broderick from “Dirty John: The Betty Broderick Story?”

Space Force: What works and what doesn’t