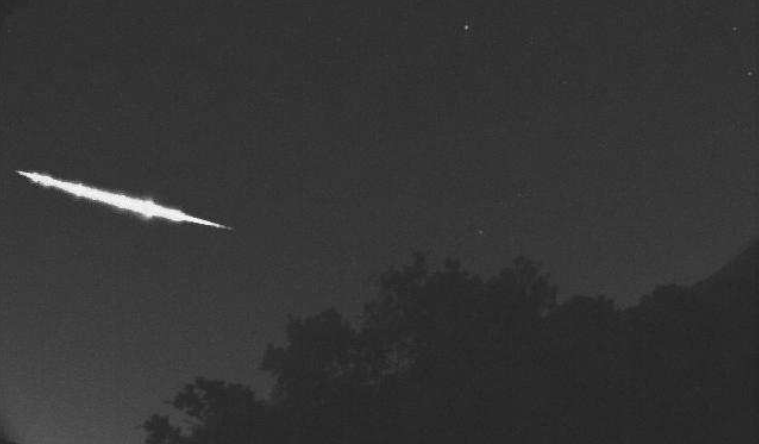 Early in the morning, April 28, 2017, a small fireball crawled across the sky over Kyoto, Japan. And now, thanks to data collected by SonotaCo Meteorological Research, scientists have determined that the fiery spacecraft was a slice of a much larger asteroid that could (far down the road) threaten the Earth.

The meteor that burned over Japan was small. After studying the SonotaCo data, the researchers determined that the object entered the atmosphere with a mass of about 1 gram (29 grams) and was only 2 inches (2.7 centimeters) across. Nobody threatened it. But small meteors like this are interesting because they can offer data on the larger objects that give them. And in this case, the researchers traced the little mountain back to its parent: an object known as 2003 YT1

2003 YT1 is a binary asteroid, composed of a large rock about 2 miles around the orbit of a smaller asteroid that is 690 feet (210 meters) long. Discovered in 2003, the binary system has a 6% chance of hitting Earth sometime in the next 10 million years. It makes the object what the researchers call a "potentially dangerous object", although it is unlikely that it will harm anyone during your lifetime.

The binary did not pass Earth in 2017, so there was no direct obvious link between meteor and its parent. But the researchers studied how the fireball moved across the sky and could return the object's orbit through space and attach it to YT1 2003 with a high degree of certainty.

The researchers said that they are not sure how the small rock split from 2003 YT1 but believe it is part of a larger stream of dust that was thrown by the asteroid. And they offered some potential explanations for how that stream was formed: Maybe small micrometeorites routinely hit the larger asteroid in the binary and fragmented it like bullets hitting a stone wall. Or maybe changes in heat broke one of the asteroid's surfaces and cut out small pieces in the dark.

One scenario offered by the authors is that the cuts are a result of the process that formed the 2003 YT1 system in the first place. [19659002] Related: Space-y Tales: The 5 Strangest Meteorites

Most people probably imagine asteroids as large, large stones, upscaled versions of the rocks they would find here on Earth. But in 2003, YT1, the authors wrote, is more likely a "rubble high", a jumble of things loosely bound together by gravity that has been merged into two orbiting bodies at some point in the last 10,000 years. The forces that hold the masses together as individual asteroids are likely to be weak, and when the two piles rotate around each other chaotically every couple of hours, they could throw more of themselves into space.

There are other, more exotic possibilities, the authors wrote. The water ice can sublimate (turn from solid to gas) from one of the asteroid's surfaces and reform as small ice balls in open space. But that and other models are unlikely, the researchers wrote.

At present, we know that the Earth has been visited by a small piece of a large asteroid. And that little bit is probably part of a stream of other little bits that sometimes go unnoticed into the earth's atmosphere. And sometime far down the road, the big asteroid can follow its young children and pop into the earth. The fireball would be much, much bigger.

The essay describing these findings has not yet been reviewed. A draft was published on October 16 in the reprint magazine arXiv.