Breaking News
Home / Sports / FIBA World Cup 2019: Team USA eliminated by France; what went wrong, and how it can be fixed before the 2020 Olympics

FIBA World Cup 2019: Team USA eliminated by France; what went wrong, and how it can be fixed before the 2020 Olympics 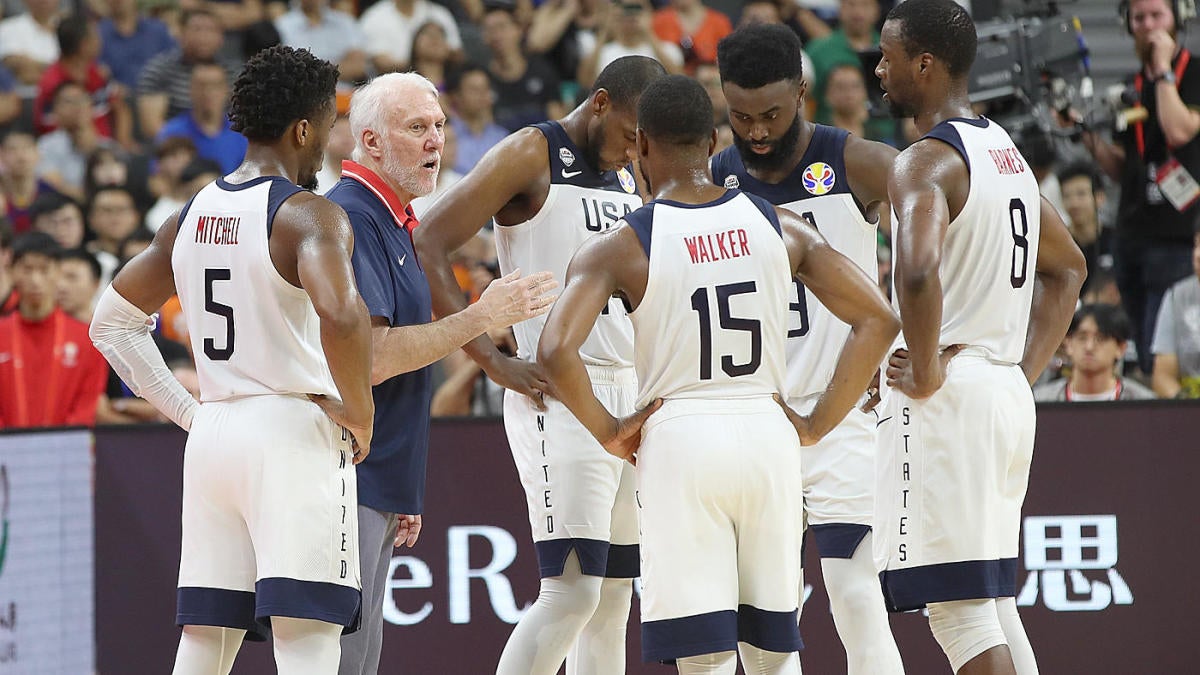 When this Team USA World Cup roster finally came together, everyone knew it would be vulnerable. Absent a true NBA superstar and with waves of players pulling their name out of the hat as the selection process played out, Kemba Walker and Khris Middleton remained as the only two All-Stars. Harrison Barnes and Miles Plumlee were the only two with senior national team experience. And we know the international teams can play.

Still, not even medal?

Indeed, the greatest fear became reality on Wednesday when Team USA lost 89-79 to France in the quarterfinals of the 201

9 FIBA ​​World Cup, ending a streak of 58 consecutive international-play victories since the U.S. started using NBA players. It's deflating, for sure. I'd stop short of calling it embarrassing. Again, our best players didn't play, and France, led by Utah Jazz center and two-time Defensive Player of the Year Rudy Gobert, is for real. It was a matchup a lot of people pointed to as a potential pitfall. Here are two things that notably went wrong for the United States, and a look at how they can potentially be corrected before the 2020 Olympics in Japan.

Lack of a closer

Down seven at the half and 10 early in the third quarter, the U.S. was in clear trouble when Donovan Mitchell took over, scoring 14 of his 29 points in the third. Then he scored zero in the fourth. Heading into this tournament, who would be the go-to player at the end of a close game was a major question, and Kemba Walker emerged as that guy. But Walker was in the middle of his worst showing of the tournament, with no field goals through three quarters vs. France. Still, Gregg Popovich went to him.

Some of it was matchup-based, but for the most part Walker got the ball and just didn't get it done, going 2 for 7 in the fourth quarter while missing two crucial free throws with under a minute to play. Meanwhile, Mitchell, after torching France through three quarters, only got three shots in the fourth, one of which was a meaningless hurl with six seconds left. Mitchell had not been great throughout the tournament, and Walker was the team's leading scorer, and Pop had clearly made his decision that Walker was going to bring the U.S. home in these situations regardless of what was happening in this actual game.

Who knows if Mitchell would've continued his torrid scoring in the fourth. It's a different beast in money time with the weight of your country on your shoulders. But it feels like he should've gotten the chance, and it only goes to show that even at the highest level of players, the difference between a star – or in Mitchell's case, a budding star – and a true-blue superstar is a gulf in a coach's eyes. Kevin Durant is getting the ball in the fourth quarter. LeBron James, Kawhi Leonard, Stephen Curry are all getting the ball. But none of those guys were around, and Walker was the closest thing to being a superstar on this team.

It's not really a knock on Walker. He's a phenomenal player, third-team All-NBA last season. But he's not Durant or LeBron or Kawhi. He's not a guy who can get whatever shot he wants whenever he wants. The closer situation was a hole on this iteration of the U.S. squad from the start, and it costs them in the end.

Team USA made the most of its hay, for as long as it was in this tournament, playing small. Against France, 6-foot-7 Jaylen Brown saw significant minutes at center, and not coincidentally, 7-1 Rudy Gobert had a field day. Gobert finished with 21 points and 16 boards, but it was more than his own stats. It was his presence.

A small U.S. defense scrambling to account for Gobert naturally had less bandwidth to extend to shooters like Evan Fournier, who finished with 22 points on 4-of-8 shooting from 3, Nando De Colo, who scored 18 points on 4-of-6 shooting while getting to the free throw line 10 times, and even Frank Ntilikina, the maligned third-year guard for the New York Knicks who finished with 11 points on 5-of-9 shooting.

Myles Turner, the starting center for the US and a Defensive Player of the Year candidate in his own right, was theoretically a similar sized matchup for Gobert, but he was in foul trouble and only played 10 minutes, and besides, Popovich had been preferring small lineups throughout the tournament.

If you're going to play small against a center like Gobert, you're almost certainly going to get killed on the boards, and the U.S. did, 44-28, a number that included 13 offensive boards for France, which led to 16 second-chance points. To combat that as a small lineup, you have to run and shoot, but the U.S. only scored nine fast-break points and France doubled their points off turnovers.

So it really came down to shooting as Team USA's lone place to not only find an advantage, but actually make up some ground, and they only made seven 3s to France's eight. Make a few more 3-pointers, and you can start to pull Gobert away from the hoop. As it was, Gobert dropped into the lane on his pick-and-roll coverage, closing down driving lanes and daring Team USA to knock down 3s, which, again, it didn't do nearly consistently enough.

The U.S. did attack Gobert with some hard drives when pulling him out on switches. Brown attacked from the middle of the floor and out of the high post. But overall, they just didn't finish enough of them as a team. Gobert was always hovering on both ends.

One of the biggest plays of the game came with less than a minute to play and the U.S. trailing by four – when Mitchell pulled out his Jazz teammate and went one-on-one to the hoop, only to be blocked from behind.

In the end, France brought too much size to the table, and Team USA's smalls left without eating enough to survive.

Where to go from here

The good news is the U.S. did manage to qualify for the 2020 Olympics. If a bunch of superstars sign up for that team on a mission to restore pride to USA basketball, it'll be a wrap. But if they don't, and the U.S. only ends up adding a handful of big names to the roster we just watched lose, the two things we just talked about, shooting and size, along with an established closer, would be the priorities.

Keep in mind, Stephen Curry has never won an Olympic gold medal. It's pretty much the only piece of hardware missing from his case. That might motivate him, and clearly that would be a step in the right direction as far as shooting / playmaking is concerned. Anthony Davis will only be 27 next summer, and that addresses the size. Maybe you get James Harden and / or Kyrie Irving for the playmaking and Paul George and / or Kawhi Leonard for the two-way versatility. If you can convince LeBron James to come aboard one last time, that kills about three birds with one stone.

We'll see who decides to commit to the cause.