Fear of humanitarian effects of Turkey's military offensive in Syria 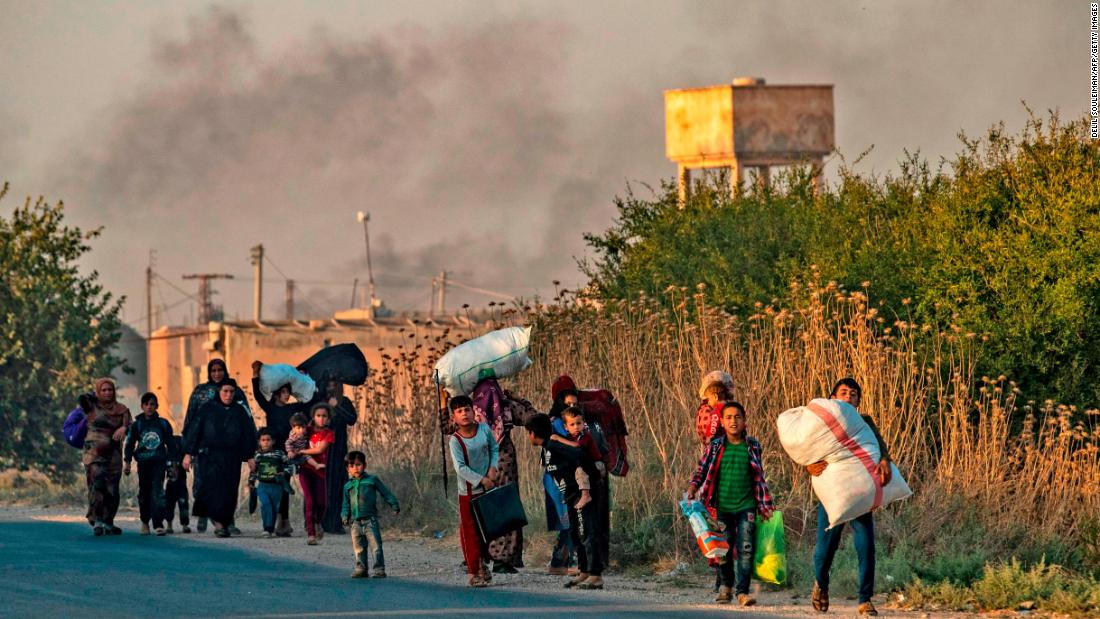 At least eight people were killed – including three Kurdish-led Syrian Democratic Forces (SDF) fighters and five civilians – and dozens of others injured during the first day of the Turkish military operation, the SDF tweeted late Wednesday.

"As the Turkish offensive in Syria begins, the IRC is deeply concerned about the lives and livelihoods of the two million civilians in northeastern Syria who have already survived ISIS brutality and multiple displacements," the International Rescue Committee said in a statement Thursday.

As a barrage of air strikes and artillery fire was brought into northern Syria on Wednesday, chaotic scenes were reflected on the ground as people attempted to flee to safety. Roads were dug with hundreds of refugee families, motorcycles piled with five to six people and mattresses attached to cars.

Reports began filtering in on Wednesday after the aerial bombardment, with the SDF tweeting that two civilians had been killed and two others injured in the village of Misharrafa, west of Ras al-Ain.

1; which provides water to hundreds of thousands of civilians in northern Syria – were also targeted.

The group has called on the international community to say that the border areas in northeastern Syria "lie on the edge of a possible humanitarian disaster."

Turkey, which maintains the objective of the offensive is to eliminate "terrorists" in Syria, said it had met a total of 181 targets belonging to a "terrorist organization", the Turkish Ministry of Defense said on Wednesday.

The United States "did not give Turkey green light"

Turkey's offensive came just days after the Trump administration announced that they were withdrawing US troops from the area, causing riots in Congress and senior prosecutions Republican lawmakers like Trump allowed Turkey to attack an ally that it considers to be an important role in the fight against ISIS.

Foreign Minister Mike Pompeo called claims [19659013] that the US withdrawal of troops was a green light for the slaughter of the Kurds "false."

"The United States did not give Turkey green light," Pompeo said in an interview with PBS NewsHour.

Pompeo said "it became very clear" after the telephone conversation with Turkish President Recep Tayyip Erdogan "that there were American soldiers who would be in danger and the president made a decision to put them in a place where they were not injured."

SDFs operating in the area are US allies. They are led by the Kurdish People's Protection Units (YPG), which Turkey considers a terrorist organization.

President Donald Trump has also trivialized the alliance with the Kurds, of which 11,000 dead are fighting to help the US mission against ISIS. "They didn't help us during World War II, they didn't help us with Normandy, for example," he said.

Trump has defended his decision to withdraw troops from northern Syria, but added that the United States "does not support" Turkey's operation.

"The United States does not support this attack and has made it clear to Turkey that this operation is a bad idea," the president said in a statement from the White House.

Trump also seemed open to discussions about bipartisan legislation on sanctions against Turkey, partly sponsored by his ally Senator Lindsey Graham. Trump said he agreed that sanctions are needed, but only if Turkey does not act in a "humane" way.

SDF said in a statement Wednesday that it had interrupted its military operations against ISIS in northern Syria following the "Turkish aggression."

There is fear that Turkey's military offensive may lead to the revival of ISIS and US officials have expressed concern that thousands of ISIS fighters may flee from Syria's prisons. Some SDF fighters had left their posts in various prisons to prepare for the Turkish offensive.
Turkey's attacks have already had a "detrimental effect" on US counter-ISIS operations, which "have effectively stopped", a senior US defense official told CNN on Wednesday.

The Turkish offensive, the official said, "has challenged our ability to build local security forces, carry out stabilization operations and the Syrian democratic forces (ability) to protect over 11,000 dangerous ISIS fighters."

Asked on Wednesday about the threat of ISIS prisoners fleeing, Trump claimed that some of the most dangerous ISIS prisoners had been moved , "Put them in other areas where it is safe."

He dismissed the overall threat and replied, "Well, they will flee to Europe."

The US military has taken care of two high profile members of the British ISIS cell known as the "Beatles", according to three US officials.
Two officials said the transfer was made on Wednesday. One of the officials said there are plans to bring the two ISIS members, Alexanda Kotey and El Shafee Elsheikh, to the United States for prosecution. The two have been held in northern Syria by the SDF for more than a year.

The State Department accused its ISIS execution cell of "capturing and beheading about two dozen hostages", including James Foley, US journalist Steven Sotloff, and US aid worker Peter Kassig.

Pompeo said on Wednesday that Trump "is aware that ISIS may begin to rise again."

He acknowledged that the terrorist group has not been eliminated in Syria, saying "That challenge remains."

"The President firmly believes that it is now time for us to prioritize, that we actually protect America first and that we get our strength in the Middle East. just right, "he said.