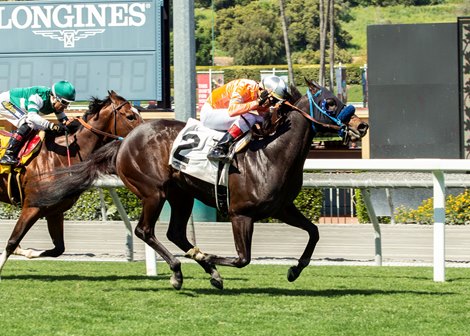 The first stakes win for Law Abidin Citizen was marred March 31 when two horses fall into the $ 100,000 San Simeon Stakes (G3T), run at about 6 1/2 furlongs over Santa Anita Park Arms Runner was crossing the dirt course from the hill to Santa Anita's grass stretch. The chart noted, "Arms Runner came out leaving the hill, took a bath on the dirt crossing, appeared injured and fell, then was watered off." La Sardane tripped over the fallen runner but grew up quickly and did not appear to have any serious injuries.

Dr. Rick Arthur, equine medical director for the California Horse Racing Board, confirmed Arms Runner was euthanized after the accident. The 5-year-old is the 23rd horse to be fatally injured while racing or training at Santa Anita since the meet started Dec. 26. He won the 201

Santa Anita resumed racing March 29, 2009, at the track to investigate the dirt surface dating to March 3.

Arms Runner's jockey, Martin Pedroza, continued to ride his remaining mounts, while Ruben Fuentes abstained La Sardane took off for the rest of Sunday's card. Joel Rosario was originally assigned the mount on La Sardane, but he was on the Dubai World Cup card March 30.

Santa Anita issued the following statement after the race:

"Arms Runner sustained a fatal injury during the San Simeon Stakes today He was racing over the 6 1/2-furlong hillside course this afternoon when, at the dirt crossing, he fell and collided with another horse, La Sardane. Both jockeys, Martin Pedroza, who rode Arms Runner, and Ruben Fuentes, who rode La Sardane, were examined by on-site medical experts and released from first aid.

" track that has been deemed by independent experts to be safe, we are working closely with the CHRB to understand if there was anything additional that we could have done to prevent today's tragedy. Today's incident speaks to the larger issue of catastrophic injuries in horse racing that The Stronach Group, together with our industry stakeholders, are working to solve throughout California and across the country. "

Able to avoid trouble in the San Simeon, Law Abidin Citizen rushed from fourth under jockey Tiago Pereira and hit the wire in 1: 11.21 The 5-year-old Twirling Candy gelding finished one length in front of Cistron followed by Mesut Air Vice Marshal and Conquest Tsunami .

Conquest Tsunami, the 1-2 favorite after winning the Jan. 27 Clocker's Corner Stakes, took the lead from the rail and set fractions of: 20.72 and: 42.50 through the first half-mile before fading.

Law Abidin Citizen is the chief earner from seven starters out of the grade 3 placed Tale of the Cat [19659010] mare Honest Answer who also wins this year's Forward Gal Stakes (G3) Feedback by Violence . Honest Answer is currently a foal to Street Sense .