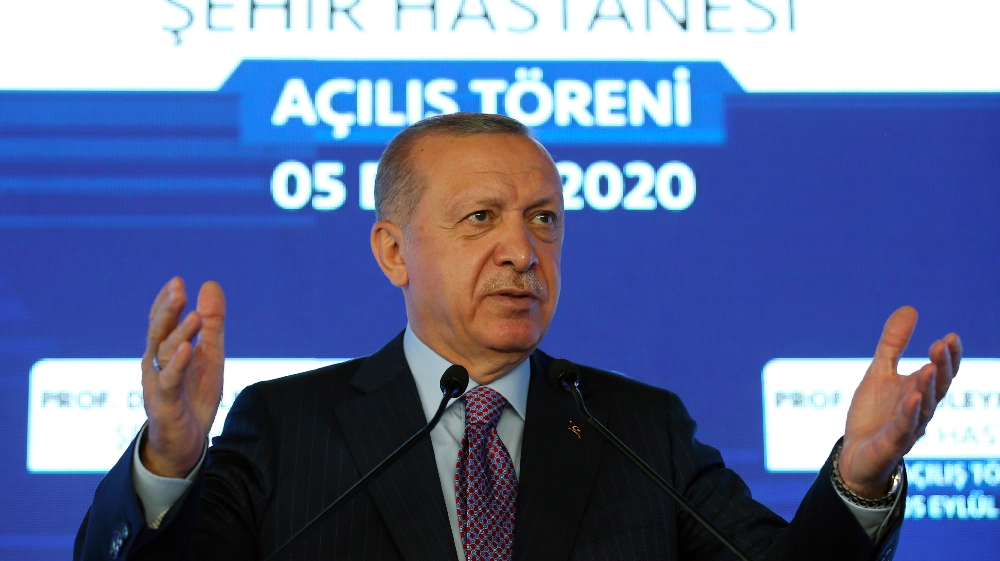 Turkish President Recep Tayyip Erdogan has filed a criminal complaint against four senior employees of a Greek newspaper for an insulting headline, according to Turkish media.

The state-run Anadolu Agency reported that the president’s lawyer, Huseyin Aydin, filed a complaint on Monday about the headline in Dimokratia, a right-wing paper, on September 18.

The headline “Siktir Git Mr. Erdogan”, which means “F *** off Mr. Erdogan” in Turkish, appeared next to a photo of the President and included the English translation.

In the complaint filed with the Ankara prosecutor̵

7;s office, Aydin described as “suspicious” the four people involved – Manolis Kotakis, the author of the article, the editors Andreas Kapsampelis and Yorgos Giatroudakis and the editor-in-chief Dimitris Rizoulis.

Following the complaint, prosecutors in the capital launched an investigation against the newspaper.

“Given the silence of the Greek public, it is understood that this moral collapse is not limited to marginal segments,” the complaint said, according to Anadolu.

The Turkish Foreign Ministry had already called the Greek ambassador for the headline, which was also published on the newspaper’s website.

The Greek Foreign Ministry said on Friday that freedom of expression was completely protected in the EU member state, but added: “The use of offensive language is contrary to our country’s political culture and can only be condemned.”

Erdogan’s move came when the two NATO countries were locked in a heated battle over energy exploration in disputed waters in the eastern Mediterranean.

Last weekend, Ankara pulled the ship back to shore for maintenance after its one-month mission, but it extended the operations of another research vessel, Barbaro’s Hayrettin Pasa, off Cyprus until October 18, according to a Friday announcement on NAVTEX’s maritime warning system.

In recent days, the likelihood of the two countries entering into a dialogue has improved.

Greece and Turkey are close to reviving talks, a Greek official said on Monday.

“We are close to restarting the exploratory talks … It will be announced when this is done but the mood is good,” Greek government spokesman Stelios Petsas told reporters.

Petsas also confirmed local media reports that US Secretary of State Mike Pompeo is expected to visit Greece for a meeting with Greek Prime Minister Kyriakos Mitsotakis to discuss the crisis, but added that the schedule is still being worked out.