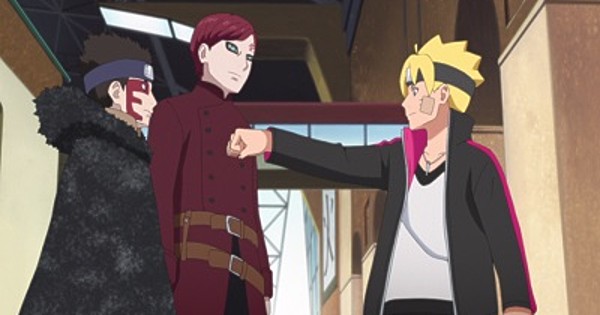 Boruto and Shinki's road trip comes to an end this week in a satisfying yet underwhelming fashion. After safely delivering Shukaku to the Hidden Leaf, Shinki rushes back to the desert to give Boruto a much-needed hand with Urashiki, who quickly saw through the boys' ruse. Although the duo initially seems to be outmatched, Boruto's Jougan soon activates, enabling our heroes to predict their opponent's movements. Enraged, Urashiki vows to kill both boys, but before he can make good on this threat, Sasuke appears on the scene, facilitating Urashiki's hasty retreat. Days later, Boruto is discharged from the hospital and is dismayed to discover that Shinki is already preparing to return to the Hidden Sand. Just as Shinki and Gaara are about to board their train, Boruto arrives at the station and chastises Shinki, whom he now considers a friend, for leaving without saying goodbye. However, he assures his new comrade that they will spend a lot more time together the next time he visits.

While there aren't a lot of surprises in this week's climax, the arc has done a decent job of setting up the boys to earn their victory, so their triumph over Urashiki feels particularly satisfying. Although their individual approaches to missions continue to be at odds, Boruto and Shinki are finally able to understand each other a little better and work effectively as a team. Not only do they manage to transport Shukaku to the Hidden Leaf, they also give the series' most powerful antagonist a genuine run for his money. Since the boys are still genin, it makes sense that they would not be able to permanently put Urashiki out of commission, but they still manage to drive him to the brink.

Of course, this is not to say that Boruto and Shinki are now bosom buddies. In a moment that feels both earned and true-to-character, Shinki cracks a little smile after Boruto calls him a friend and bids him farewell, but the two have a long way to go before their friendship is on the same level as their fathers '. Still, considering the stunt Boruto pulled during the chunin exams, the fact that Shinki is willing to give him a chance speaks volumes. (Boruto offering Shinki a formal apology for his chunin exam antics would also have been satisfying, albeit slightly out of character.)

While there was a fair amount of meandering and wheel-spinning, Boruto's latest adventure wasn't without merit. There were a number of fun action sequences — most notably Boruto and Shinki's showdown with Urashiki — and characters we haven't checked in with in a while got to enjoy some time in the limelight. Boruto or Naruto developing an uneasy friendship with someone who appears to be their polar opposite isn't exactly the most original ground for this franchise but since it's essentially baked into the Naruto-verse's DNA, this formula seems destined to be repeated. With dynamic action, rivals united against a common foe, and a sprinkling of character progression, this arc manages to stick the landing despite its bumpy start.

Boruto: Naruto Next Generations is currently streaming on
Crunchyroll.

Amy is an author who has loved anime for over two decades.