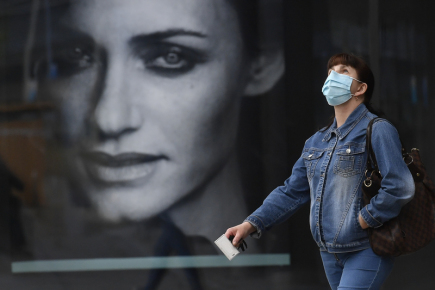 Prague – The number of new cases of corononavir in the Czech Republic increased by more than a hundred on the fourth day in a row, with an increase of 143 on Friday. To date, laboratories have confirmed 27 patients, significantly less than previous weekdays. In total, since the outbreak of covid-19 disease in the country, hygienists have discovered the infection in 13,089 people. 8212 of them were cured, 352 people died of the infection. In most districts of the Czech Republic there are no new infections, the disease outbreak is found in the regions of Karviná, Frýdek-Místek, Kutná Hora and Jihlava. This is followed by information on the Ministry of Health̵

Currently, the entire country has 4525 patients. Most of them have a mild course of disease. There are now 137 patients with coronavirus in the hospital, of which 16 are in serious condition.

About 58,600 people in the Czech Republic have quarantined since the beginning of March. Most of them were around 36,000 in the first month of the covid-19 infection in the Republic, according to statistics from the Department of Labor. According to the Czech Social Security Administration, about 3,200 people are in isolated isolation with e-handicaps, more than a third of them in the Karviná district.

Below 100 was the daily increase of those infected during the two holidays in the extended weekend in July, otherwise it has recently exceeded this limit. The number of cases detected is related to the number of tests on a given day and is usually lower on available days. On Friday, the laboratories performed 5281 of them, which was the most since June 3. The proportion of infected persons in the total number tested was 2.71 percent, similar to the previous days.

In the Karviná region of the Moravian-Silesian region, which is now most affected by the disease, they registered about 108 new cases per 100,000 inhabitants during the past week, four less in the morning. The disease spread in the district mainly among workers at the OKD coal company and their relatives.

In the neighboring area of ​​Frýdek-Místek, where DEVA has ceased operations due to the infection, there are approximately 36 new cases per 100,000 inhabitants in the last seven days. In the Ostrava region, there are now almost 18, in the Kutnohorská region 40, in the Jihlava region more than 19 recently ill per 100,000 inhabitants and, for example, in Prague less than six.

In the Kutná Hora region of Central Bohemia there is an outbreak of covid-19 in Církvice, and since midnight extraordinary measures have been taken by hygienists – people who must have drapes indoors outside the home, mass incidents are limited and visits to hospitals or nursing homes are prohibited. . In the Jihlava region of the Vysočina region, the focus is in Větrný Jeníkov.

Of the more than 100 coronavirus tests conducted by hygienists on Friday to employees at Jihlava Hospital and clients on social services, one is positive. A similar number of people were tested today, the results should be on Sunday afternoon. All cases are related to an outbreak of covid-19 in Větrný Jeníkov, says Jiří Kos of the regional hygiene station.

From Monday, July 13, Jihlava City Hall will introduce mandatory wear of veils when entering the office buildings. Although the disease covid-19 has not yet appeared directly in the municipality, one of the city’s employees is ill. The City Hall is thus preparing further measures as a precautionary measure, and again, public transport curtains may be mandatory, said municipality spokesman Radovan Daněk.

Among the regions, the most infected so far were registered in Moravia-Silesia, where 3670 cases of coronavirus have been detected so far. In Prague, there are a thousand fewer cases, and in the least affected South Bohemia, laboratories have so far detected 211 patients. With covid-19 most died in Prague, there were 109 deaths. The smallest deaths are recorded in the Zlin region, there were three.

In the Tábor region, he is building a high-pressure gas pipeline with a plow

The Czechs are reacting to drought and floods. He also creates ponds and tree lines behind apartments or by the highway

The night fire in Kutná Hora’s Avia was accompanied by explosions, damaging 20 million