Breaking News
Home / CzechRepublic / On Sunday, the highest proportion for the number of tests in two weeks was infected

On Sunday, the highest proportion for the number of tests in two weeks was infected 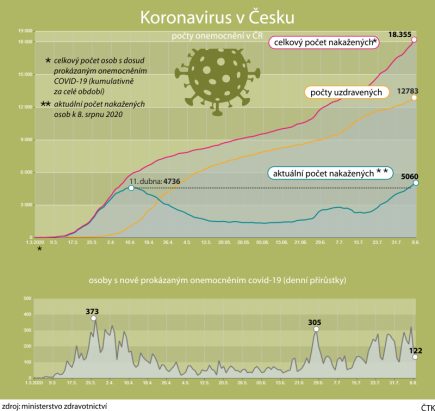 Prague – On Sunday, the Czech Republic had the lowest number of cases of covid-19 in the past week, but the proportion of new infections in the number of tests was the highest in the last 14 days. Tests on Sunday confirmed coronavirus infection in only 122 people, but less are usually tested on weekends. The proportion of new cases in the number of tests thus increased to 4.45 per cent, which was the highest since 26 July. This follows from the information on the Ministry of Health̵

The daily increase in confirmed cases last week on weekdays varied from Monday’s 209 to Friday’s 323 positive tests, which was the third highest increase since the epidemic began in the Czech Republic. On Saturday and Sunday, as on the previous weekend, the number of infections decreased below 200. At the same time, as on previous weekends, the number of tests decreased sharply, from about seven to eight thousand on weekdays to only 5,159 on Saturday and 2,740 on Sunday. . Sunday’s share of new infections in the number of tests thus exceeded four percent after two weeks.

To date, 100 new infections have been added so far, so 18,454 cases of the disease have been confirmed since the epidemic began in the country in March. Over 70 percent of those infected have already recovered from the disease. According to the ministry, the number of patients with covid-19, whose number reached the highest values ​​since the epidemic began last week, continues to increase. Currently, 5081 people suffer from the disease. The number of deaths from people infected with coronavirus has not increased in recent days, remaining at 390 since Thursday. 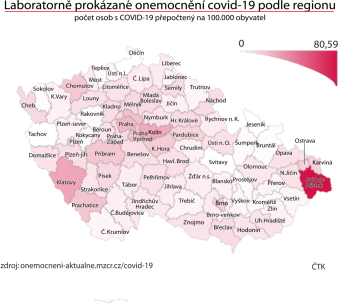 The most affected region is still Frýdek-Místek, where there are about 82 newly registered cases of covid-19 per 100,000 inhabitants in the last seven days. It is followed by the Klatovy region with more than 38 cases and the city of Prague and the Kolín district with more than 27 cases. The Prague-East area has about 24 infected in the last week per 100,000 inhabitants.

Today, the Ministry of Health published a map of regions depending on the degree of infection with covid-19, the so-called traffic light. Only the city of Prague and the green-level district of Frýdek-Místek were listed as the first of three on the map as regions at increased risk. Other regions are white at the traffic light, ie with zero or negligible risk of infection. According to the head of hygiene, the situation has improved in most regions. At the first traffic light, introduced by the ministry last Monday, nine regions were green and the others were white.

Belarus spent 4.5 years in a court in Prague to help separatists in Ukraine

Prymula began to admit, provided he did not hinder the economy. The government specifically limits the opening hours of restaurants and bars Home

In Brno, they will test in a covid bus. But self-payers are unlucky