It works even without photography. Cute Fall Guys breaks down popularity charts

The genre of Battle Royale games, where a group of players in a limited area are fighting for survival, has been here with us for a long time now and it looks like the cards are dealt. Call of Duty: Warzone, Apex Legnds and Fortnite do not look at all at first glance, in essence they are basically the same. It’s just about destroying your opponents before they destroy you.

The beginning of every round is pure chaos.

Fall Guys does it completely differently. The road to victory is not to destroy others, you just have to be faster and smarter.

It is actually a game of the popular TV series Takešiho hrad, where the participants compete together on maliciously designed obstacle courses and risk painful bruises to entertain the spectators. Only here, instead of hard-working racers longing for fame and money, do we play for cute characters who resemble colored cones.

The Fall Guys game is a conglomeration of several randomly selected mini-games, during which players are gradually eliminated until there is only one left. You will fight for victory in a maximum of 15 minutes, but for most of the sixty participants it will be a much shorter experience. It’s not easy to just fight your way out of the original qualification.

Fall Guys is not just about skill, but also about luck. Each round begins with a mass start, and before the leading group is profiled, which everyone is hunting for, it is pure chaos. All the “suppositories” crash into each other and roll on the ground, you lose a lot of games just because of someone else’s mistake.

People who take multiplayer deadly seriously and focus only on winning should avoid the game in a wide arc, as the “luck” factor is very strong here. If you are looking for quick instant fun, you can hardly find a better game. In Fall Guys, it’s fun to lose. 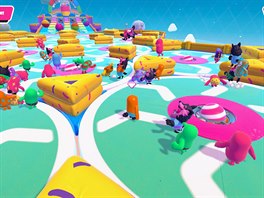 Fall Guys are fun even if you lose.

In addition to the mandatory competitions, where the fastest winners, there are also many mini-games. Some of them are also teams where cooperation is important. You have to roll a big ball over an obstacle course, play baba or pull on a stick in a local variation to catch the flag position. In these moments, you must learn to cooperate with existing enemies. Just so you can throw sticks at their feet again in the next round. Fall Guys are non-violent, but it is of course possible to hurt opponents.

Thanks to a deliberately exaggerated physical model, it is easy to knock opponents down to the ground or at least throw them off balance. Even in such a sweet and calm game, there are of course trolls who have fun, for example by standing on the finish line and shooting away catch players even at the expense of their own lives.

However, I see a bigger problem in jumping mechanics, which has to get used to for a long time. The buttons react here with a short delay and before you discover the right rhythm you will often get into trouble. However, the rules are the same for everyone, and sooner or later it will easily remember the control getting into your blood.

Fall Guys is an absolutely ideal game if you need to unwind, and even though I have not won once before, I definitely do not feel like I am wasting time. Although the graphic and musical processing looks childish, it is purposeful and within the chaos that takes place on the screen, also relatively clear. From the beginning, the game was affected by disconnections, as the servers did not handle the attack by players, to this day it has been fixed.

For subscribers to the PS Plus service, Fall Guys is temporarily free, for others it is an investment worth about CZK 500. Even if the game contains microtransactions, these can only be spent on cosmetic improvements and do not affect the game in any way. The authors promise regular doses of new content, which can be trusted due to their tremendous success. By the way, the person responsible for communicating with the fans is a master in his field and is perhaps even more fun than the game itself.

Will put this on top of the pile when I send designs to the art team because I have 4 pet rats Abusing my community manager powers for the benefit of the rat community. Can I get some rats in the answers pls https: // t.co/6MWq1oHlXE

Fall Guys is exactly the kind of game where you, when you look at the pictures, say it must be horrible nonsense, and then at three in the morning you can not break free from it with the words “one more game and I will sleep” .

Pre-orders for new Xboxes have started. It’s just the fastest

New watches and headphones from Huawei already have Czech prices

create a backup and forget – Živě.cz