Head of Taxi Service Bolt: I was inspired by Skype

The starter bolt works according to the principle of an application through which a customer orders a pick-up, so it resembles an Uber. It is now available in 100 cities in 30 countries, including the Czech Republic. But the beginning of the service was modest.

But Willig started his dream with only five thousand euros (SEK 127,000), which he got from his family to create a prototype of his application Taxify. It was immediately after he graduated from high school. The idea was inspired by Skype, which is also native to Estonia. She said that the new technology business can be done globally.

"I realized that I could make a huge impact in this industry and do amazing things with a small team," Willig told CNBC. Six years later, when he was 25, he became the youngest founder of a billion-dollar company in Europe.

During the first days of his business, he took himself to the streets to recruit his drivers. “My point is to be customer-centric and not be modest. This is a company where customers really care about what they get for their money. So you can either offer 20 percent discounts, or make sure this part of every ride goes in the driver's pocket, explains Willig. 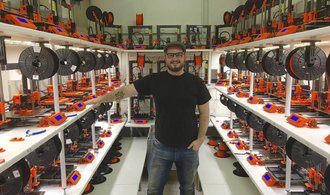 He decided to go the other way. According to CNBC, bolt drivers earn an average of about 10 percent more than other platforms. According to Willig, the key to a successful start is the right focus and consistent selection of ideas for those who are worth the money and who are not. “As an entrepreneur you sometimes have hundreds of ideas that look good. You want to realize them all. But in the end, you will only do a few things well, Willig explains why Bolt focused on alternative taxis.

But Willig gradually expanded his business. This includes shared electric scooters that have been in Prague since last year. He created a competition for the American company Lime, which is also involved in this service. But that was not the only enlargement. Bolt launched the Bolt Food import service in Estonia at the end of August. Willing wanted to demonstrate the company's growth to other areas of mobility.

“My advice for young entrepreneurs is: choose the company name that suits your business vision. But don't be afraid to change it if your vision grows, "Willig concludes.