In the Czech Republic, more than 1,100 new infections were added in a single day. Professor Roman Prymula warns that the Czech Republic is on the verge of exponential growth. And Prymula is not the only expert to utter warning words. According to Martin Balík, chief physician of the Department of Anesthesiology, Resuscitation and Intensive Care at Prague University, the behavior of the virus does not change. But he is convinced that we can handle it.

Are you worried about the further development of the situation around COVID-19? (We ask from 9.9.2020)

The second week of classical schooling is just going on and the number of people infected on Tuesday, September 8, exceeded the level of 1,100 cases. The total number of patients is currently more than 9,200. The disease is mild in most people. Most patients are in Prague.

Publicist Čestmír Strakatý pointed out with a bit of irony that the Czech Republic is once again the best in the world. This is often emphasized in particular by Prime Minister Andrej Babiš.

“These beautiful battles. Another record increase, which for me (in Reflex) the alleged alarmist Jaroslav Flégr predicted ‘until’ 9/11. We are the best in the world again! So now the number of infected people per capita in Europe. What’s up? “Prague’s hygiene ban from next week? How will tracking and counting of patients change? Then we’ll see,” Strakatý wrote. 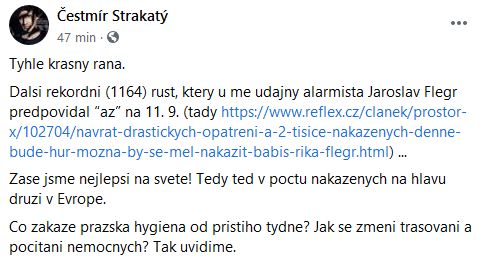 Epidemiologist Roman Prymula believes that measures in the spring and summer weakened too quickly, and today we are paying for this with a significant increase in patients. In an interview for the Novinky.cz server, he noted that the effects of the reintroduced measures in these days will only become apparent in a few weeks.

“It’s the process of loosening measures, and the epidemic is behaving in some way, especially if the change (loosening of measures) has been so extensive. In my opinion, individuals play a crucial role in this in the way they approach it. Unfortunately, many people underestimate this today, and this must of course take the form of spreading so massively, says Prymula.

According to Martin Balík, chief physician at the Department of Anesthesiology, Resuscitation and Intensive Care at General University Hospital in Prague, the virus’ behavior is not changing.

He also decided to explain that covid 19 is definitely not the flu.

„The big difference lies in the infection. There are many more patients than patients with the flu. Furthermore, in inflammation in the wall of the blood vessel and in the need to dilute blood for patients. Infections can be caused by an increased number of venous and sometimes arterial thrombosis. This is especially evident in organs that are very well permeated. The vascular network suffers from damage and organ problems arise, with which media sometimes function as published damage to the lungs, heart or brain. We do not see much with the flu, he said in an interview with iDNES.cz.

On the other hand, according to Balík, people without symptoms can also be considered for work. They just had to wear a veil all the time, often have their hands clean and generally follow basic hygiene habits.

In the autumn, however, there may be problems.

“I think it will be the same problem as it was in March. We still only have symptomatic treatment, we only treat individual organ diseases, but we have no miracle cure to stop the virus. We have Remdesivir, we have some drugs that can increase “Now it depends much more on the doctor’s qualifications and the team’s harmony than on any specific drug,” Balík pointed out.

But the doctor is currently convinced that the health service will cope with all autumn attacks.

Prymula acknowledges this, but warns with a breath that it must not deceive anyone in the feeling that nothing is happening.

“The clinical capacity is relatively high, but it can not shake us, because we have to see the dynamics that are there. We have to direct it so that we do not let it into any exponential curves, so that the capacity is not compromised,” says the professor.

Are you a politician? Publish everything you want without editing. Register here.
Are you a reader and want to communicate with your representatives? Register here.