Police spokesman Pablo Castillo said that the capture and seizure of the drug took place in the community of Estrella del Norte in Laguna del Tigre, a wooded and protected area in the department of Petén, bordering Mexico and Belize.

He explained that the drug was transported on a plane that landed on a secret path and the prisoners were made after a confrontation between the Guatemalan police and the military with at least 25 suspected drug dealers.

Meanwhile, a spokesman for the Army, Óscar Pérez, commented that the radars detected the traces of an illegal flight entering Guatemala's territory, expelling Air Force helicopters and ground personnel to the place where the ship landed. 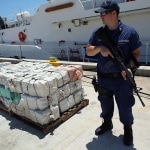 Pérez said that when military units and police arrived at the scene, they found at least 25 suspected drug dealers withdrawing the drug from a era that when they noted the military presence, they attacked with firearms.

Security forces arrested 12 alleged criminals, one of whom shot. The rest escaped, he detailed.

Washington estimates that 90% of cocaine arriving in the United States passes by light aircraft, boats and submarines through Mexico and Central America.

Johanis Menco left the clinic, “we have” bold “for a while”

Naya Rivera and the tragic fate of the “Glee” series