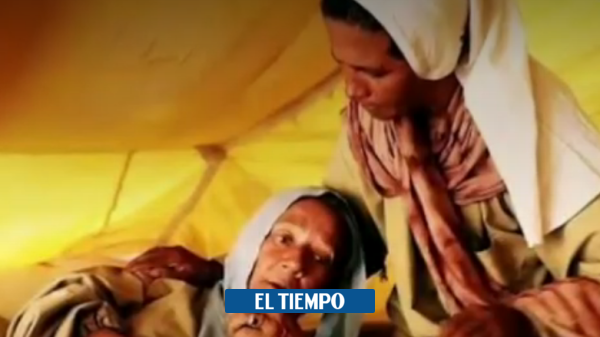 “She got very tired of waiting for my sister,” says Professor Edgar Narváez sadly and has to tell death to his mother Rosita Argoty Narváez, who even During his last moments, he kept the illusion of seeing his daughter, the nun from Nariño Gloria Narváez, kidnapped on February 7, 2017, very close to Burkina Faso, in Africa.

Her death occurred at the age of 87, in Pasto, at 07:30 on Monday, she did it in her five senses, she was very calm and even had time to say goodbye to her children Carlos, Carmenza, Gloria and Edgar; He also leaves two grandchildren, Daniel and Valentina, the teacher̵

The day before, on Sunday, as if feeling his death, he decided to say goodbye to his children with a heartfelt hug, then he wanted to listen to the Eucharist broadcast on TV, perhaps to thank God for so many years of life.

“She said goodbye, gave us a hug from mother to child and the next day she woke up badly, He lay down on the bed, he blessed us and nothing else “, confirms his firstborn son about his last moment in life.

“She blessed us, she already fulfilled her life cycle, she fulfilled her duty and thankfully she went well, she did not suffer or make us suffer”, she admits and also reveals that when they looked at her mother they realized that she already he was not in all his senses and that his anxiety was already reality.

Although death is a difficult subject for many Catholics to understand, when it comes to the teacher, he describes his mother’s disappearance as “beautiful and calm.”

She died as she wished at home, in bed and with her children. Yes, it was a natural death, a death that my God rewarded for being good people in this world, she admits and then assures that “my mother hoped she would return, to hug her and rest in peace but my God took her away before her time.”

It may interest you: In Jericho, the nuns also came out to protest the mining project

A group allied with Al Qaeda has confirmed that it has kidnapped Colombian nun Gloria Cecilia Narváez. The terrorist organization criticized the Vatican for not promoting negotiations for his release #TuMundoHoy pic.twitter.com/Jkzq3TxNry

He always rekindled his illusion of seeing his daughter kidnapped in a Malian village by members of the extremist group Al-Qaeda again, especially he was very happy when he watched the video where Gloria seems to provide care services. It happened on July 13, 2018, it was the last known survival test for the family in Nariño.

Edgar believes that his sister’s long time in captivity and in such a remote country may have expected her mother’s death.

“Partly yes, because she suffered a lot, she did not sleep, there were nights she spent in white, she told me what will happen to Gloria … it was a moral grief”, she emphasizes and She also told him on several occasions that she had dreamed of the nun, who came to Nariño dressed in white, and assured her: “It was like a little angel who came to visit her, my mother was very Catholic, she prayed the rosary every day, she did not I could miss 6 o’clock on TV ”.

It is located in a border area

During the last months of her life, she knew that the nun was taking care of Muslims as a nurse, because the last information the family has is that she is alive, that she is watching over war victims in Mali where there was a recent coup d’etat to the government, the situation in the country is sensitive with the arrival of a military regime. But he is sure it is on the border between Burkina Faso and Mali.

To find out about their mother’s unfortunate death in the town of Pasto, they went to a Spanish missionary priest the same Monday. He sent a message to the archbishop of the city of Karangasso, in the Republic of Mali, so that he would be the one to deliver the sad news.

Also: Do ​​you want to move a floor to a statue of Belalcázar in Cali? open debate

Given the difference of 8 hours between the continents, Edgar has full assurance that the nun today already knows that her mother died.

In the same way, she trusts that this event can serve as an early release for the religious missionary and her return to her home. “I hope they release her, that this is a springboard and they will have mercy,” he says.