Although the patient's relatives noticed that the old man declined for several days, he eventually returned to an active life.

American doctor has described a type Rare kidney damage in an 81-year-old man. The reason was due to the patient's unusual diet: he tried to consume as many antioxidants as possible, so he ate nuts and wheat germ every day. Excess oxalic acid in this food, 10 times the daily norm formed crystals that damaged the patient's kidney tube . The case was published in BMJ Case Reports.

Eating fast or precooked food can cause several illnesses: from obesity to vision loss. This is due not only to the excessive calorie content of such foods, but also to the lack of vitamins and minerals. But the enthusiasm for "right nutrition" is not always certain; On the contrary, there may be too many minerals in "healthy foods."

See also: Opportunities for developing dementia can decrease with a healthy lifestyle

For example, Barbara Clark of Allegheny Health Network and her colleagues described the case of an 81

-year-old American. The patient had been in good health all his life and, despite his thirty-year history of type 2 diabetes, had never been hospitalized he had not undergone serious examinations and had not received injections IV.

Once in his blood test, doctors found an increase in creatinine, twice greater than normal. This is a by-product of muscle work, which is normally eliminated by the kidneys. If there is too much creatinine in the blood, this indicates that the kidneys are not doing their homework well. However, the doctors found no obvious cause of renal failure: the patient did not smoke and rarely drank alcohol, had no signs of inflammation or intoxication, all other tests were normal.

Read also: Not only sugar: consumption of sweetened beverages is also associated with the risk of death

A few weeks later other symptoms appeared: nausea, anorexia and drowsiness. The creatinine in the blood was already 8 times higher than normal, and his kidneys were hardly excreted. In the urine analysis, doctors found evidence of acute tubular necrosis, that is, renal tissue destruction. However, the cause could not be found immediately: doctors ruled out a viral infection, cancer and autoimmune diseases.

After repeatedly analyzing the urine, physicians discovered calcium oxalate crystals, salts of oxalic acid Then they performed a biopsy of the patient's kidneys and confirmed their diagnosis: nephropathy caused by oxalate accumulation.

The amount of oxalic acid salt in the body could be increased for several reasons. For example, due to a congenital genetic defect that causes liver cells to secrete more oxalate than usual. Or for a side effect of taking medication, as diet products that block the absorption of fats in the gut. 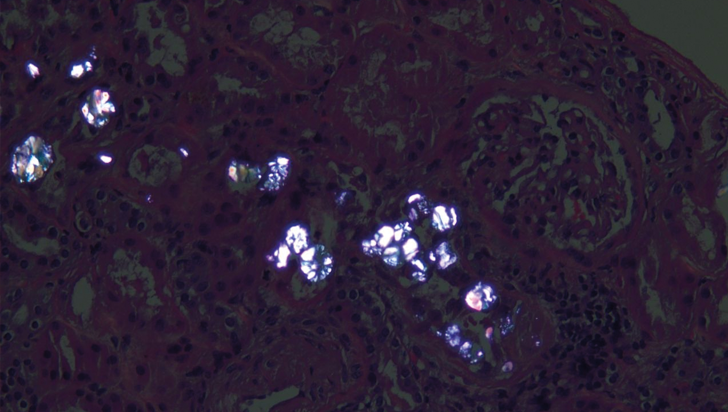 But in the case of octogenarian, eating habits were the cause of nephropatin. It turned out that he was on a healthy diet and tried to get as many antioxidants as possible from food . Every day he drank no less than a liter of almond milk and also ate several tablespoons of tomato puree, wheat plants, peanuts, Brazil nuts, hazelnuts, pistachio almonds, almonds and cocoa powder. According to the researchers, this diet fed the patient 1,500 mg of oxalic acid per day more than 10 times the daily norm.

After the final diagnosis most of the symptoms were eliminated. Although the patient's relatives noticed that the old man was decaying for several days, he finally returned to an active life. The amount of creatinine in your blood decreased, even though it did not reach normal values.

You may be interested: By eating fast food, teens end their visual neurons

Doctors point out that patients who are passionate about a healthy lifestyle may not know how much and what substances they get from food. At the same time, a varied diet can also have serious consequences. Therefore, the authors recommend that colleagues pay more attention to patient research on food preferences.

Although many people tend to consume more antioxidants there is not much evidence Direct benefits for a healthy person. On the contrary, there are studies that many vitamins and supplements do not provide benefits and in some cases weaken the immune system, at least in mice.