Breaking News
Home / US / CNN Poll: Biden leads as Warren and Sanders battle for second on eve of debate

CNN Poll: Biden leads as Warren and Sanders battle for second on eve of debate 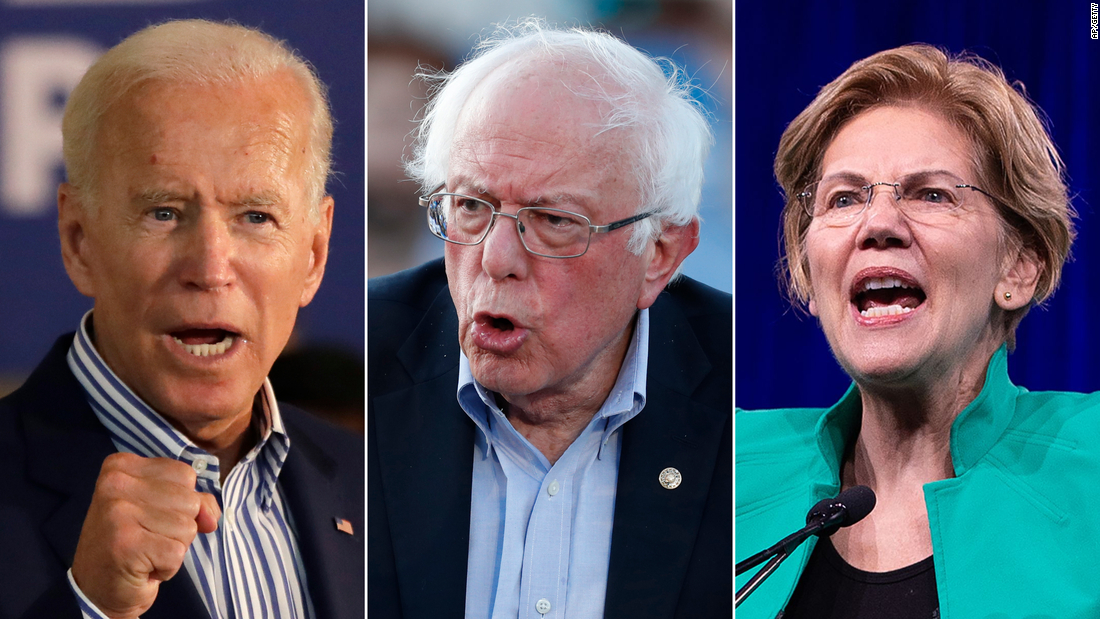 The former vice president is at 24%, Warren at 18% and Sanders at 17% are once again the only candidates to reach double-digit support. Three other candidates have 5% or support or more in the poll: Sen. Kamala Harris (8%), South Bend, Indiana, Mayor Pete Buttigieg (6%) and former Rep. Beto O'Rourke (5%). The remaining candidates all score 2% or less in the poll.

Biden's lead rests on his support among black voters, among whom he leads by a wide margin with 42% backing him and his nearest competitor – Sanders – earning just 12% support. Warren (23%) and Biden (21%) are about even among white potential Democratic voters, with Sanders not far behind at 15%. Among Hispanics who are Democrats or Democratic-leaning independents, Sanders stands at 24%, with four other candidates in double digits: Biden at 1

Biden's backing among black voters comes primarily among those over age 50 (53% in that group support him vs. 30% among those under age 50) and from those who are moderate or conservative (47% in that group support him). That mirrors the pattern among Democrats more generally, but holds to a greater degree among black voters. Sanders' strong showing among Latinos comes more from younger Hispanic voters than from older ones.

If they have in past polls, Democrats are more apt to say they want the party to nominate a candidate with a strong chance of beating Trump (55%) over one shares their position on major issues (39%). But Biden's advantage among those who want a candidate who can defeat the President has shrunk some since August. In that poll, 35% of those who favored someone who can beat Trump backed Biden, 15% Warren and 14% Sanders. Now that group splits almost evenly between Biden (26%) and Warren (21%), with Sanders at 11%.

Democratic voters are narrowly more concerned that the party will nominate a candidate who is too liberal (49%) vs. one who is not liberal enough (41%). Biden fares better among those worried the party will lean too far left (27% in that group back him, 15% Sanders, 13% Warren) than among those who are worried the nominee won't be liberal enough (27% in that group favor Warren, 22% Sanders and 20% Biden).

Overall, deep enthusiasm about voting in 2020 continues to outpace the level measured in previous presidential cycles at this stage of the contest. Overall, 45% of registered voters report feeling "extremely enthusiastic" about voting, compared to 30% who said so in early September 2015, 28% who felt that way in October of 2011, 26% in June 2007 and just 19% in October 2003. Democrats and Republicans are about equally likely to express deep enthusiasm for voting: 51% of Republicans are extremely enthusiastic and 47% of Democrats say the same.

Enthusiasm is more fervent on the ideological edges of each party, with 54% of liberal Democrats and 56% of conservative Republicans deeply enthusiastic vs. about 4 in 10 in the ideological middle.

But the partisan divide on which issues matter is stark. Among Democrats and Democratic-leaning independents, 59% call health care extremely important vs. 40% of Republicans and Republican leaners. A majority on the GOP side considers the economy critical (53%), while fewer Democrats agree (45%). The sharpest gap comes over climate change. Among Democrats and Democratic leaners, 56% call it extremely important vs. just 11% of Republicans and Republican leaners.

The CNN Poll was conducted by SSRS September 5 through 9 among a random national sample of 1,639 adults reached on landlines or cellphones by a live interviewer, including 908 Democratic or Democratic-leaning registered voters. Results for the full sample have a margin of sampling error of plus or minus 3.2 percentage points, it is 4.3 for the subset of potential Democratic voters. The survey's sample included oversamples of African American and Latino registered voters. Those subsets have been weighted to represent the appropriate share of the overall population, and are not over-represented in the overall results of the poll.

Pence blows up John Roberts’ court as “disappointing for conservatives”