SportsPulse: The Nationals are going to their first ever World Series and in the process had one of the most historic turnarounds we've ever seen in baseball.
USA TODAY

Yes, Bryce Harper has been watching his old team, the Washington Nationals, march through the National League on its way to the franchise's first World Series appearance.

No, he doesn't have any regrets.

In his seven years with the Nats, Harper never led them as far as they have gone now. The Philadelphia Phillies inked him to a 13-year, $ 330 million deal this offseason, so Harper has had to watch his former teammates play champagne throughout October.

"They made their decision, and I made my decision as well," Harper told The Athletic. "I made the best decision for my family. And I'm so happy to be in Philly. It's the place I wanted to be."

As for how he's handled missing out on the remarkable postseason run by a year?

"I think it's about being able to be the person that I am and not saying to myself, 'Oh my gosh, I can't believe I'm not a National,' or, 'Oh my gosh, those guys are doing what they're doing. I can't believe it. I'm so jealous, "Harper told The Athletic. "No. So happy for them. You know how hard it is to get into the postseason and win games. For them to be able to put it together this year the way they have, an amazing thing." 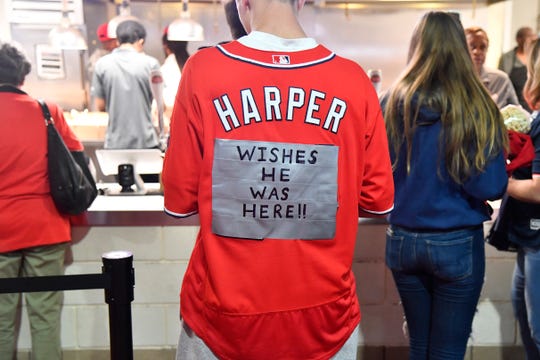 Together, the Nationals and Harper experienced playoff heartbreak. The Game 5 debacle of the 2012 NLDS against the St. Louis Cardinals preceded more division series failure in 2014, 2016 and 2017.

'This is for you': Washington Nationals fans ready for more

But Harper garners zero resentment Plus, who knows if the Nationals go this far with Harper on the roster?

"Over. I'm wearing No. 3 now. And I play for the Philadelphia Phillies – you know what that says?" he told The Athletic. "I appreciate them supporting me before and buying those jerseys. But now they can do whatever they want with them. They're all theirs."