Under the Arc of Triumph, Femen judges "war crimes" 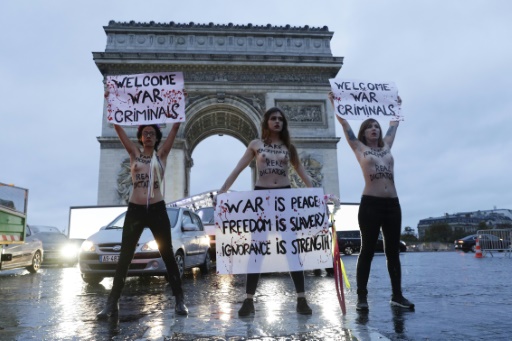 Femen activists demonstrate during the Arc de Triomphe in Paris on November 10 to condemn the presence of "war criminals" among the heads of state invited to memory on November 11th. Geoffroy VAN DER HASSELT

Three activists Femen briefly exposed topless on Saturday morning during the Arc de Triomphe in Paris before commencing the police, to terminate the presence of "war criminals" among heads of state invited Sunday to the birthday of November 1

The three The young women were imprisoned after their arrest, police said.

Crown of flowers in her hair, nude and fistrad in the air Activists cried "Welcome War Crimes," said an AFP journalist. Their torsos were painted with the slogan: "False Peacekeepers, Real Dictators"

Arrived by car at the Place de l'Etoile around 8.00, they climbed the barriers of the tribunals where it was to take place on Sunday the celebration of the centuries-centenary of the century that ended World War One. More than 70 Heads of State and Government are expected

"We have come to protest against future heads of state who are ashamed of peace, most are dictators who do not respect the rights of the people." In his country, "condemned AFP Tara Lacroix, 24-year-old activist .

"They came to celebrate peace while advocating war," she said, without mentioning any names. She then started by the police with her two comrades, wondering by Chinese tourists who came to photograph themselves in front of the historic monument.