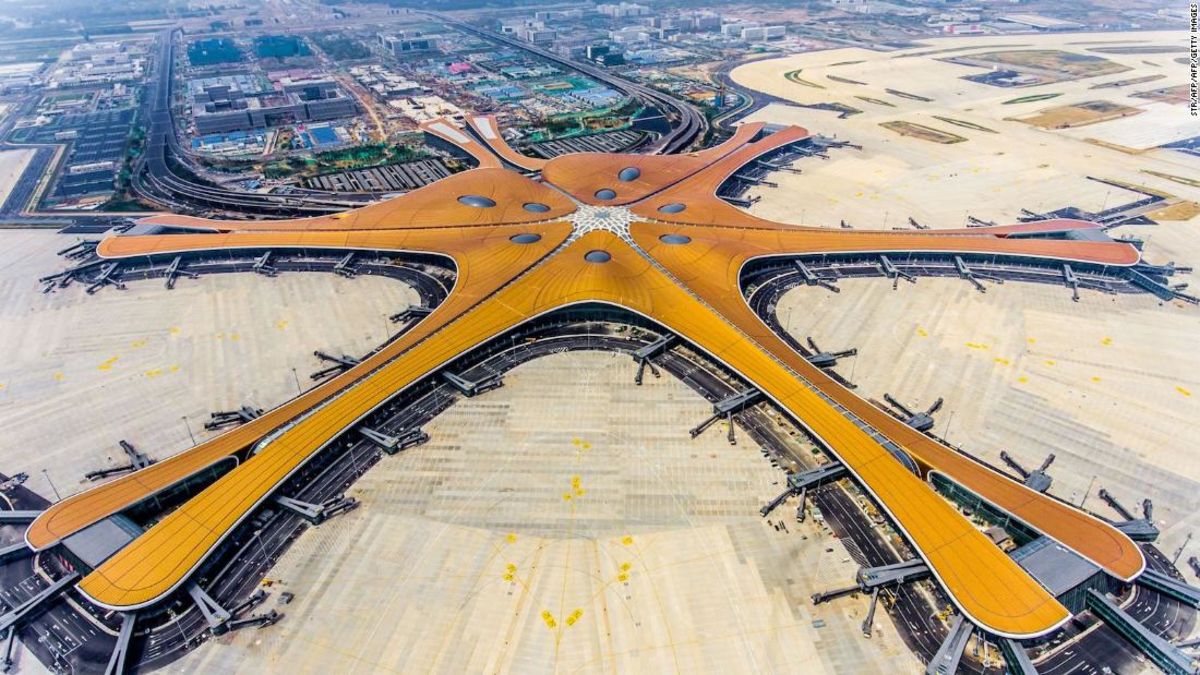 Beijing (CNN) – China is poised to open a new mega-airport to the south of Beijing, already home to the world's second-busiest aviation hub, ahead of the 70th anniversary of the People's Republic.

Beijing Daxing International Airport (PKX) will see its first commercial flight take off around September 20, according to Chinese state media, with main tenant China Southern planning to deploy an Airbus A380, the world's biggest airliner, for the maiden journey.

The highly anticipated airport ushers in a new era for air travel to and from Chinese capital, which has been in desperate need of a second global gateway.

In 2018, more than 100 million travelers passed through its three terminals – making it only the second airport in the world to cross that passenger traffic milestone, after Hartsfield-Jackson Atlanta. China is projected to take over the United States as the world's largest air travel market by 2022.

The multibillion-dollar Daxing, designed by the late architect Zaha Hadid and her Chinese partners, is built for the future , boasting four runways and a terminal the size of 97 soccer pitches upon opening the first phase – as well as customer-service robots that will provide travelers with flight updates and airport information.

Construction for the $ 11.5 billion project began in 2014, with more than 40,000 workers on site at its peak. The terminal bears all the hallmarks of Hadid's signature contour lines, with plenty of natural light shining through its more than 8,000 distinct rooftop windows.

The terminal has more than 8,000 distinct rooftop windows.

Nicknamed "starfish" by Chinese media for its shape of five competitions connected to a main hall, Daxing aims to reduce walking for passengers, long a complaint about many new mega -hubs. The airport authority has promised a distance of no more than 600 meters (650 yards) – about eight minutes of walking – between security checkpoints and the remotest gates.

Another passenger concern is Daxing's location. It's in the far south of Beijing, a city notorious for traffic jams. The new airport is some 50 kilometers (30 miles) from Tiananmen Square in the city center – and even farther away from the main business districts in the east and north.

Brushing aside such worries, officials say they have built more than just an airport – but rather a truly integrated transportation hub that will eventually see high-speed rail, inter-city services and downtown-to-airport express trains all stopping right beneath the terminal. The airport express trains, traveling at a top speed of 160 kilometers an hour (100 mph), promise to whisk arriving passengers to the city in less than 20 minutes.

Yet others say a new mammoth aviation hub will only be flying flight delays in Beijing, already ranked near the bottom of on-time performance lists among airports worldwide.

There is no indication that the Chinese military, which controls most of the country's airspace, will loosen its grip to give airliners more maneuver room. But aviation officials and airline executives predict reduced delays at Daxing thanks to its multi-directional runway design that improves operational efficiency in the air, as well as its location south of Beijing – eliminating many flight detours aimed at avoiding the city's large "no- fly "zone.

Main Daxing tenant China Southern plans to deploy an Airbus A380 for its maiden journey from the new airport.

For frequent fliers around the world, though, it may take some time to figure out if Daxing will be their preferred gateway to the Chinese capital.

It was going to be a crown jewel for Skyteam, one of the three global airline alliances, with China-based members China Southern and China Eastern – each assigned 40% of the new airport's departure and arrival time slots by the government – moving all their Beijing flights to Daxing to become anchor carriers. Other Skyteam members such as Delta, Korean and Air France-KLM will move to the new airport in phases.

China Southern, however, will now leave Skyteam by the end of this year, having signed agreements with several members of rival Oneworld alliance, including American Airlines and British Airways, for closer cooperation.

Adding another twist to the confusing plot, Air China – the country's flag carrier and a Star Alliance member – was supposed to remain at the current Capital Airport along with other Star carriers. But it was recently given 10% of Daxing's time slots after authorities allowed China Eastern to keep its highly profitable Beijing-Shanghai shuttle flights at Capital.

All the tenant intrigue aside, Chinese officials are eager to showcase the country's newest mega-hub to the world upon its grand opening, announcing that flights from Daxing will cover 112 destinations around the globe by next spring.