Breaking News
Home / Technology / Battle of the Azeroth Review under way: To bring the world back to World of Warcraft

Battle of the Azeroth Review under way: To bring the world back to World of Warcraft 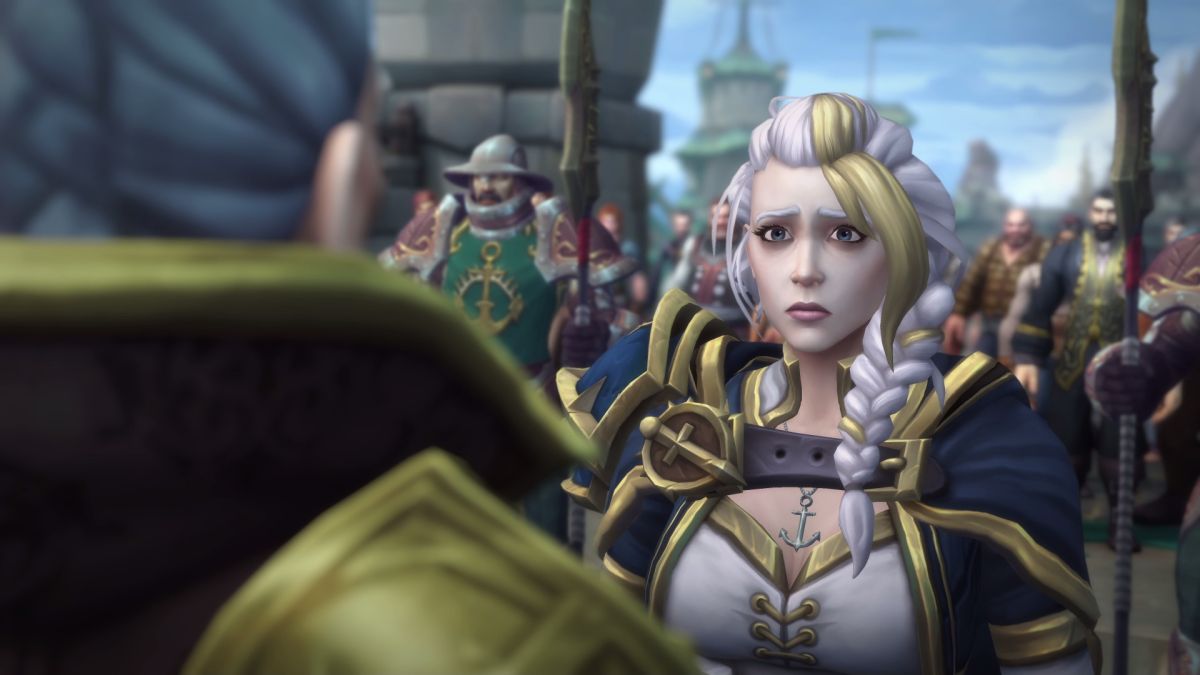 Rodrigo, Freehold Flight Master, does not seem exactly all there ̵

1; if you know what I mean. But when he gives me a modest amount of gold to avenge the local pirates who have bullied him, I can not refuse. Who does not love to beat up bullying? Rodrigo wants me to jump on one of his many giant parrots and fly around the city and release bombs on the brigades, which seems a bit difficult until I take flight and realize that he was not literal. When a giant green dare breaks out of the parrot's nerve area to spit on a no-pained pirate, I hear him shouting "Agh, my eye!"

Welcome to World of Warcraft, a place where I shake my head for a minute and an hour later slaughter civilians who have been dishonestly infected with Lovecraftian brain beams. I'm not getting wrong, but I love WoW does not divorce its white from its darkness. There has always been a world that blinks between serious and goofy, but the battle against Azeroth encompasses the tonal duality with conviction. The end result is a landscape full of moments that are sometimes gloomy, sometimes hilarious and always fun.

What is good for?

I fell well over 40 hours and leveled a Horde character to the new level of 120 in beta, and now halfway through leveling an Alliance's character on the live servers. It may seem like a lot of effort, but it's because Battle for Azeroth does something new and gives each faction its own distinct continent and storyline to experience. If I only wanted to play a page, I would miss half of what this expansion offers.

Why Horde and the Alliance needs their own leveling zones makes sense if you have been aware of pre-expansion events. The two factions were spiraled into all-out war after the Legion climax left a moonlit sword stuck in Azeroth's crust. The planet dies slowly and the blood, a mineral called Azerite, siphrates to the surface. As always, it appears that Azerit is the perfect ingredient to make bombs, ammunition, swords-all that stands out to kill people really. So of course, both sides are warring over it.

It is a prerequisite that works even if it is only intended to lift players on another adventure. In addition to the first narrative work, there is not much in the Battle of Azerot, which reminds me that two global superpowers make it clear. It seems as usual quite common in Azeroth. Now that I'm elbow deep in task to complete and zones to explore, I do not really care. The two new continents Zandalar and Kul Tiras are so spotlessly crafted, so lovingly detailed that I'm going to apologize. Blizzard has to let me go there.

There is a lot of history packing up in Battle for Azeroth, but it is because sometimes it feels that two extensions are rolled into one-at least in terms of the initial story. Each fraction gets three zones to level in, which is just shy of Legion's four. Therefore, as much as Blizzard has tried to stoke the fire of faction troubles, players are much better to play both sides.

At Kul Tiras, Alliance players work with the famous wizard Jaina Proudmoore to win support for his family's powerful fleets. It is easier said than done, given the fear of Kul Tiran and despising Jaina to step aside while Horde murdered his father all the way back to Warcraft 3. Do things even more complicated, the valuable Coal Tiran fleet has disappeared along with the mighty Waycrest family. To unite Coal Tiras, alliance players will chase and solve these three problems. At Zandalar, however, Horde players will meet an old and powerful magician who now culminates in history. Political scheming threatens King Rastakhan's rule from within while cannibalistic bloodstrokes and a treacherous public threaten the shrinking borders of the empires.

I wish I could decide which zone I like more, but the magic Zandalar and Kul Tiras human shipping really are like apples and oranges-and each one is delicious. The partying jungles in Zandalar are a kind of lively high imagination that Warcraft has had difficulty in after years of questing through worlds formed by either orcs or demons. After the legion, I would never see the color green again, but Zandalar's primordial jungles produce a greater sense of miracle than the green unrest on Legion's Broken Isles. The Nazmir zone, with its hidden swamp and cannibalistic blood trolls, was an early favorite. But I've actually come to love Zul & Dazar, the region that also houses Zandalar's capital where Horde players will spend time interacting with some of the Battle of Azeroth's new game modes.

This is World of Warcraft's environmental design on one level I have not seen it before. Instead of treating the city as an isolated search center similar to the floating city of Dalaran in the Legion, Blizzard disappears by making the whole place a giant zone. The end result is a sprawling city area that feels lively and dangerous at the same time. It's such a step above World of Warcraft's older cities that it breaks every time I'm taking a trip home.

Kul Tiras hits a tough contrast by being more subdued and fragile – a rugged, temperate climate of boreal forests, snowy mountains and confused homes filled with a harder (and fatter) race of people than you'll find back in the eastern kingdom . Unlike Zuldazar, Kul Tiras did not immediately touch my jaw, but the more I spend questing here, the more I will love the tiny shades of the hard beauty.

These two new continents have quickly become my favorite without expansion to date, but let's be true: World of Warcraft is about questing and loot. I'm glad to say that so far the leveling experience on both continents has been very fun. It is still the same old-fashioned formula to ride into a hub, scoop up some missions and then ride out to complete them – rinse and repeat a few hundred times. What is different is that these assignments expertly weave in memorable stories and undermine my expectations, especially when I take the time to actually read the mission dialog.

In a bazaar in Zul, Aman, I was asked to kill some glittering raptors after a bit of a guard's ass. After completing my goal, a big raptor attacked and ran away. I chased it to his home (a giant high trash) and was not confronted by a stupid raptor but by Jani, the protector of thieves, the thief's lord, the godfather. As a punishment, Jani transformed me into one of the little raptors whom I had killed and commissioned me, believe it or not, biting the guard's ass that first set me on this mission.

Suddenly, World of Warcraft became a stealth game where I had to avoid patrulling guards as I raced through the bazaar looking for my booty. It's just a little questline of hundreds. The battle of Azeroth's mission is to the worst, meaningless coal, made more enriching by taking the time to read the pages in the attached text. There is a very good world building here, but players just have to be patient enough to slow down and experience it.

However, slowing down is not easy, with the siren's call to Battle of Azeroth's final play, which ever draws me to level 120. With two new forms of group content, 10 new prison cavities, a slogan and the return of the World Quest system, there is a lot to cover to save for the whole review. But one thing worth clarifying is that much of the late playoff will be shut down until September 4th. The players will have to wait until then before they can jump into the new raid Mythic + (a particularly troubled dungeon dare infinitely), and the epic Horde versus Alliance Warfronts.

All these types of group activities have a main purpose: kits you in sexy equipment. Like the Legion artifact weapon, Battle for Azeroth has a new meta-progression system called Azerite Armor. Early in the expansion, players will get a heart of Azeroth necklace that slowly arises when they serve Azerite from missions and other sources. Raising your heart of Azeroth to certain levels is necessary to unlock special features found in Azerite Armor in the same way that the players used Artifact Power to unlock features in their artifact weapon. The big difference here is that instead of being equipped with a single weapon for the entire expansion, players can wear different pieces of Azerite Armor based on what moves they want to unlock.

It would be a good system if the properties I unlocked were not so painfully boring. On my Demon Hunter tank, for example, most of the features give me a special shield or thanks for some extra damage if I use one Certain skills. Certainly, there are some good benefits to have, but they are far from artifacts that can change how a whole class would play. The Azeritian system is that I have several characteristics to choose from on a given Azeri Armor, but what is the point when And one is as boring as the other?

Unlike the Legion , I'm really hard to paint the motivation to get out of my way to Azeri farm because the reward just does not attract. Hopefully, as the expansion matures, Blizzard adjusts this property is to significantly affect my Demon Hunter fighting style.

The disappointment I know about Azeri Armor is a slight blow in what has otherwise been a rather sublime experience, at least when it will compare up to 120. I have a lot of thought about how the Battle of Azeroth's playoff will shape up (worry you do not, there is no worrying) that I save for the final review. But so far, Battle for Azeroth makes an excellent first impression. Even though the entire "Battle" part – the war between Alliance and Horde – feels a little bit constructed, the two new continents are an explosion to explore and search.

We will get our full review of World of Warcraft: The Battle of Azeroth next week.

macOS Big Sur: Learn more about the changes in the user interface