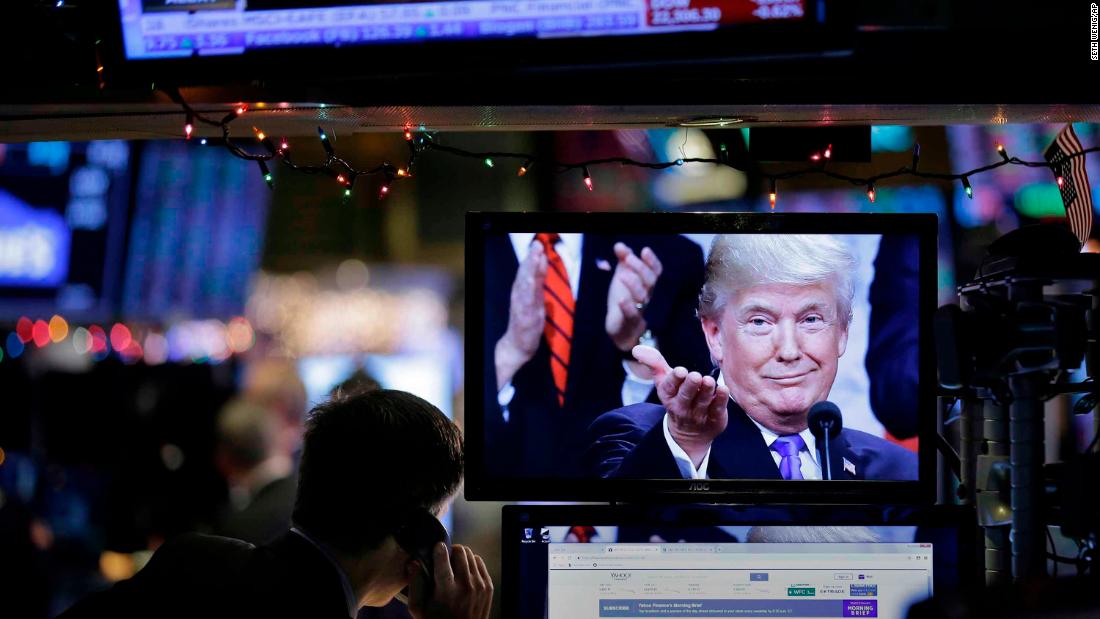 Both China and Germany – the world's second- and fourth-largest economies – delivered disappointing economic data overnight. Germany, which relies heavily on exports to China and the US, reported slight contraction in the second quarter, opening up the possibility that it might tip into full-blown recession.

The US has continued to see positive economic growth and a hot job market, thanks in part to Trump's 2017 tax cuts, but that's largely driven by consumer demand that could be dashed by a slowdown abroad.
Analysts say Trump's decision to delay some tariffs may have been too little too late ̵1; and that he risks losing his most powerful argument for reelection: the economy.

Wall Street breathed a sigh of relief after the Trump administration agreed to hold off slapping further economic penalties on an array of Chinese imports until mid-December, marking the first time the President has acknowledged that US consumers' pocketbooks could be hurt by the escalating trade war.

But that reprieve appears to have lasted only a day.

On Wednesday, stocks sank as the bond market sent a new warning sign that a recession could be nearing. The Dow Jones Industrial Average shed 800 points, erasing yesterday's gains, while the yield on the US 30-year Treasury note fell to a record low.

Markets sank after yield on the 10-year Treasury note fell below two-year yield for the first time since 2007. This kind of inversion is viewed by many as a strong signal that a recession is likely in the future.

Trump and aides have been spooked by market turbulence for the past several days and the President has been encouraging officials to find ways to turn it around as the numbers have continued to slide.

Trump has been closely watching markets over the past week, including Wednesday, according to officials. He was pleased Tuesday that his decision to back off tariffs on China caused a boost in markets.

Trump's frustration in the markets has been directed mainly at the Federal Reserve, as well as the chairman he appointed, Jerome Powell. But people familiar with the matter say he's also ventured that the team tasked with negotiating a trade deal with China has so far failed to strike an agreement.

Some of Trump's aides have grown concerned over the past months that the economy is weakening, but their view is not necessarily shared by the President, who insists the economy is strongly based on steady job growth.

President once again took public aim Wednesday at the Fed and Powell for failing to act aggressively enough in cutting interest rates to help buoy the US economy.

"China is not our problem, though Hong Kong is not helping. Our problem is with the Fed. Raised too much & too fast. Now too slow to cut, "Trump wrote on Twitter from his Bedminster golf club.

Diane Swonk, chief economist at Grant Thornton, said the Fed will almost certainly cut rates at its next meeting in September but warned that the Fed is running out of ammunition.

"This is really self-defeating in terms of what the President is doing," Swonk told CNN's Brooke Baldwin. "When he really needs the Fed the most, this will leave them with less in their tool box."

Navarro argued that the decision to back off tariffs on China as a "Christmas present to the nation" and that the inversion of the yield curve was further evidence that the US central bank should cut rates even further the year-end holiday season.

"This is basically the Federal Reserve's problem," Navarro said. "They are causing this because when Jay Powell got in as chairman he proceeded to rein in interest rates by 100 points, too far too fast. Even though the Trump economy is rock solid, it slowed us down a bit because of those higher interest rates . "

In June, the Fed cut rates for the first time since the Great Recession to fend off the possibility of a downturn in the US. Powell, the President's choice to lead the Fed, has not shut the door completely on cutting rates further this year, though he has also suggested the central bank has entered an extended period of lowering rates.

But economists say additional rate cuts this year may not be enough to erase the lasting damage of a trade war on the US economy – and beyond.

The Fed, Piegza said, has "a very limited tool bet this time around" with interest rates now hovering between 2% and 2.25%.

Economic forecasters keep pointing to an increased possibility of a recession. JPMorgan Chase warned last week that the probability of a downturn over the next 12 months has climbed to 40%. Bank of America says the odds of a recession next year are greater than 30%.

And Goldman Sachs says the recession risk is rising because of Trump's trade war, though the bank's head said this week he's not concerned about an imminent crisis.

"The underlying economy is still doing okay," Goldman Sachs CEO David Solomon told CNN Business' Christine Romans during an exclusive interview on Monday. "The chance of a recession in the near term is relatively low. But we have to watch what's going on with the tariffs."