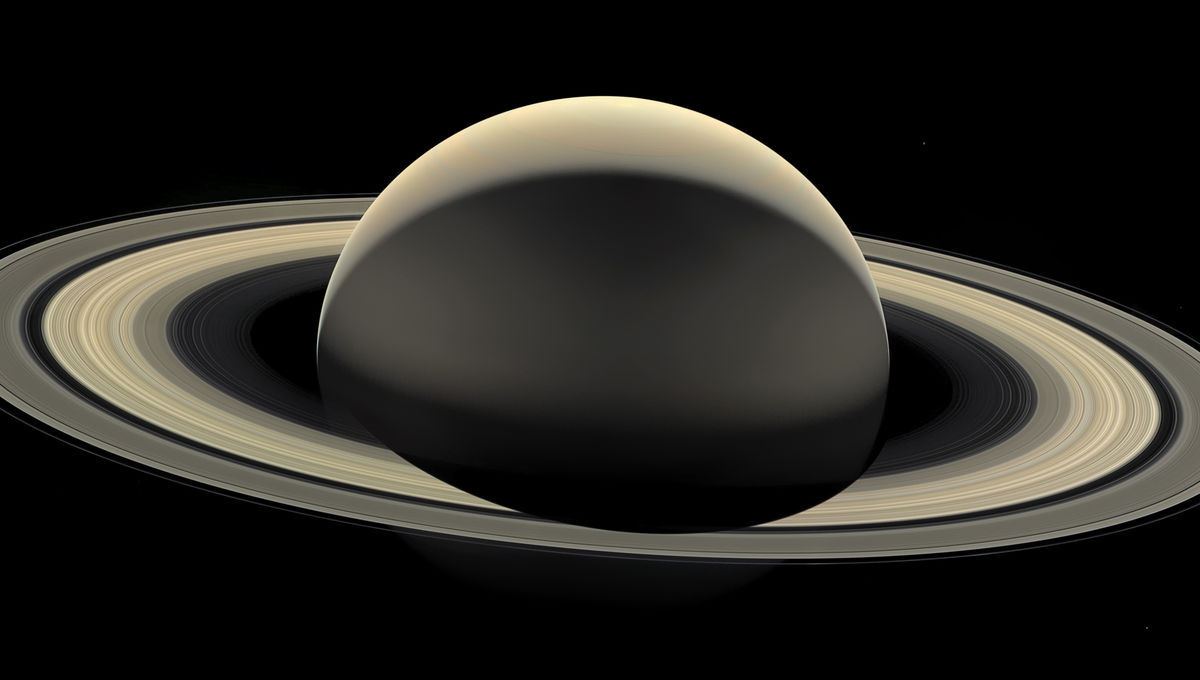 It's been a while since I've posted a jaw-dropping shot of Saturn from Cassini. To compensate, I have something special today.

First a brief background. August 11, 2009, was the vernal equivalent of Saturn: The point in its orbit when the sun was directly above Saturn's equator. This means that the sun was shining exactly in the direction of Saturn's rings as well. Why does it matter? Well, for lighting is important!

The rings are made of countless pieces of very nearly pure water ice, a few small, a few meters above. How the light passes through them changes their appearance – when there is no equilibrium, and the sun shines down on one side of the rings, they look different from the illuminated side versus the "under", from the illuminated side. This is because light reflecting from the rings (seen from "above", the sunlit side) is much stronger than the light coming through. This dramatically changes how they look, and much can be learned about their composition in this way.

Seeing them at equilibrium, when the sun is shining perfectly in their plane, provides a third alternative. But even at equilibrium, all deviations from the rings are flat much more clear, because anything that protrudes from the rings will cast a long shadow on the rings themselves. Think of a small rock on the ground at noon, which casts a small shadow versus the sunset when the shadow is really long, longer than the rock itself.

Saturn's rings are strangely flat. But not perfect so. Due to the influence of the moon orbiting the planet, some ice particles in the ring can be pulled out of the planet. This creates dramatic images of the ice tower that is seen due to the low solar angle, which would be invisible at other times during Saturn's year. So those in charge of Cassini took a zillion photos of the rings during that time, both before and after the exact day of equilibrium, to capture the long shadows.

Enter Kevin M. Gill, a software engineer who also does image processing. He often processes raw Cassini images into high art, and in this case he made an astonishing video. He took a pile of pictures taken on July 26, 2009, just before the Equinox, sewed them in 3D and turned them into a cylindrical projection, created an animation that makes it feel like you fly above the rings at equilibrium , follow them around Saturn for 250,000 kilometers!

Whoaaaaaaa. In this animation, you fly over the outer edge of the B-ring. Saturn is about 175,000 kilometers to the right, the sun about 1.5 billion kilometers to the left. More immediately, on the left side of the screen is the inner edge of the Cassini division, a large gap in Saturn's rings (you can even see it in small telescopes from Earth). This part of the division is particularly empty of ring particles and is called Huygens Gap.

Just over a minute into the animation you start to see bumps in the B-ring, which gets bigger as you travel, and then around 2 minutes in they tower over the ring up to 3 kilometers high! These are believed to be caused by small moon crowns in the B-ring that gravitationally interact with the ring particles and throw them into these enormous spiers.

Keep in mind, while traveling 250,000 km around the rings here, this is still only about 1/3 of the way around! Saturn's rings are huge . But for all this, they are fragile and thin, made up of countless trillions of small icy grains.

How wonderful would it be to take such a journey in reality? I sincerely and truly hope that humanity will eventually have a chance to take a journey like this.

P.S. You can follow Gill on Twitter and see all his amazing pictures as he does them.