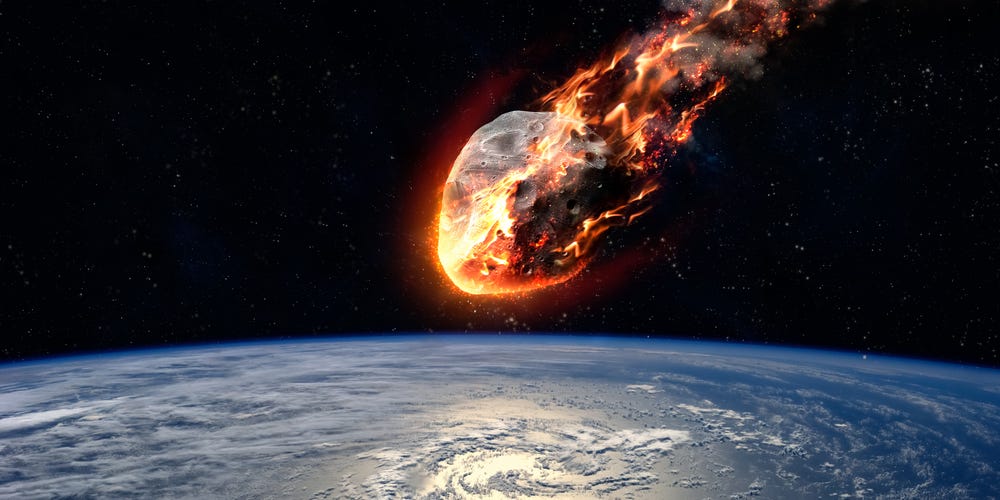 About 66 million years ago, an asteroid more than 6 miles wide struck modern-day Mexico. The impact sparked wildfires that stretched for hundreds of miles, triggered a mile-high tsunami, and released billions of tons of sulfur into the atmosphere.

Within a minute of hitting the Earth, the Chicxulub asteroid had drilled a hole nearly 1

00 miles wide into the sea floor, creating a bubbling pit of molten rock and super-hot gas. The contents of that fiery cauldron skyrocketed, creating a mountain-high plume that poured acid rain into the oceans.

Read More: For the first time, a timeline reveals what happened in the minutes and hours after the asteroid crash that killed the dinosaurs

While scientists knew catastrophic events on land following the asteroid's impact triggered the mass extinction of 75% of life on Earth (including the dinosaurs), the mechanism by which ocean species perished was less certain. Now, a study in the journal Proceedings of the National Academy of Sciences found that the barrage of acid rain following impact was probably the killer.

After the asteroid crash, the study authors wrote, the oceans underwent rapid and intense acidification. That then disrupted marine food webs and sparked a mass extinction.

"It's flash acidification, and it transformed ecosystems for millions of years," Noah Planavsky, one of the study's authors, told the New York Times.

To unravel the mystery of what happened following the fateful asteroid crash, scientists either examine rocks that were deposited during or after the impact, or seek out fossils of creatures that died around the time Chicxulub hit.

In this case, the lead author of the study, Michael Henehan, found a revealing layers of clay in the Geulhemmerberg cave in the Netherlands. The clay contained rocks dating back to both the time right before the impact, as well as the moments after the crash. The rocks in each layer held fossilized shells of microscopic plankton called foraminifera.

Henehan and his team were able to examine levels of chemical isotopes in those shells, which offered clues about the plankton died.


Henehan's team found that the proportion of boron isotopes – a measurement that can serve as a proxy for ocean acidity – suggested there was an increase in the acidification of the seas over the 100 to 1,000 years following the Chicxulub asteroid impact . He told The Guardian that the walls of the fossilized shells also appeared "much thinner and poorly calcified after the impact."

Overall, these clues suggest oceanic pH dropped by 0.25 units on the pH scale within a millennium of the asteroid crash . (The scale starts at 0 for fully acidic and goes up to 14 for fully alkaline; typically, the ocean is alkaline.)

Though a millennium might seem like a long time, it means the oceans' surface is acidified in a "flash" "on a geologic scale, according to the study authors. That acidification wiped out many plankton species, triggering the global collapse of marine food chains and the subsequent mass extinction of ocean life.


"We show ocean acidification can precipitate ecological collapse," Henehan added. "Before we had the idea, but we didn't have the empirical proof."

According to the study authors, this discovery has ramifications for our understanding of the current state of our seas.

Earth's oceans absorb 30% of the carbon dioxide emissions that humans release. That causes chemical reactions in the water that acidifies the sea. Oceanic pH has already dropped 0.1 units —a 30% increase in acidity — since the start of the Industrial Revolution.

The pH drop that happened 66 million years ago was only 2.5 times the decrease we've seen over the last 250 years. According to the Smithsonian Institute, oceanic pH is expected to drop another 0.3 to 0.4 pH units by the end of the century.

"If 0.25 was enough to precipitate a mass extinction, we should be worried," Henehan said.


Ocean acidification is happening at a faster rate than at any point in the last 300 million years, according to a 2012 study. Planavsky told the New York Times that this rate could be comparable to the flash acidification that followed the dinosaur-killing asteroid.

A mass extinction like that "is at the extreme end of what we could get in the next 100 years, "he said.

Can you make a snowball of Neutrinos?