What problems hide the cure of celery juice according to doctors – ElSol.com.ar – Diario de Mendoza, Argentina 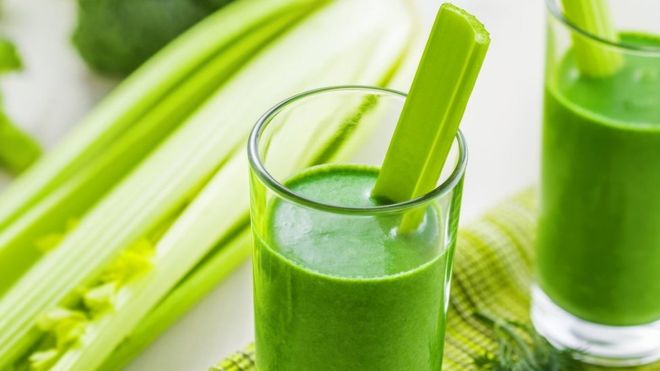 If you spend a lot of time on Instagram, you may have found posts from people who have a green drink: celery juice. We may not all be lovers of celery, but drinking is fashionable.

It's a phenomenon. Google Trends statistics show relatively little interest in celery juice in recent years, but everything changed with its arrival on social networks; Earlier this year, there was a sharp increase in searches related to it.

Let's start by saying that harm won't do you: Raw celery juice is low in calories and rich in vitamin K and other vitamins and minerals that may be beneficial to your health.

But one of the most popular advocates for drinking the pulp of this green vegetable said some things about the benefits of celery properties that experts say have little or no scientific support.

Doctors are also worried because they say that if people follow the advice of these health influencers, patients can stop looking for them. advice from qualified medical staff

How did the trend begin?

The biggest influencer of celery juice is a man who calls himself the medical medium. His real name is Anthony William. He has two million followers on Instagram and another 3.4 million on Facebook.

On his website there are several testimonies from celebrities who claim to have drank celery juice. Among them, tennis star Novak Djokovic or actor Robert de Niro.

In its social networks, this influencer includes statements such as: "Celery helps cure fibromalgia" and "Raspberry removes viral remnants from the bloodstream" .

Their website goes further and ensures that celery juice can relieve diseases such as cancer and diabetes.

Sida Medical Media's web and social networks are at the heart of a company that offers books that have reached the bestseller list for The New York Times. It also contains links to sell products or join services.

But doctors and healthcare professionals are far from convinced by their claims.

Dr. Austin Chiang, a gastroenterologist in Philadelphia who makes videos on his own channel YouTube told the BBC that claims from Medical Medium are not supported by science and "could be potentially harmful to our patients" .

Tips that come from the spirits

Anthony William freely admits that he has no medical education and that he gets his medical information from "a spirit."

In one of his YouTube videos, he says, "When I was four years old, I heard a voice: & # 39; I am the highest spirit. There is no one but me, but God Himself." Describe in the video how the spirit at a young age told him that his grandmother had lung cancer. [1

9659002] He also talks about "secrets that have not yet shown how to finally heal," and says he can "reveal the truth about chronic diseases that he will not hear anywhere else. "

William says that none of the information he provides should be considered" a promise of benefits, a claim from priests, a legal guarantee or a guarantee of the results to be achieved. "

In a legal notice as a disclaimer on its website, it also states that your advice is not intended to replace healthcare professionals, which is contrary to what he raises in his videos.

I one of them he says: "I can give you clarity on diseases that doctors often misdiagnose or treat incorrectly, or simply give up and label the disease as mysterious. "Along with this conversation about alleged priests, there is a hidden disclaimer in the terms of use on their website.

What does a doctor think about this?

" We who practice medicine day after day can see that it you're not really presenting based on any kind of evidence, says Dr. Chiang.

"We believe that this really contributes to misinformation and that it can be harmful to our patients."

"I think part of what makes these accounts attractive is that when you eat fruits and vegetables and adopt a healthy lifestyle, you probably experience some of these benefits, "he says.

But Chiang says relying only on online medical advice of unqualified influencers can have the potential to be extremely dangerous.

"Those of us who work in health care We have seen patients come to the emergency room or show up in our clinics too late because they subscribed to some form of home medicine that is not based on any science," he says. [19659002] As an active YouTube and Instagram user, Doctor Chiang is concerned about the amount of incorrect medical information available online and has created a nonprofit called the Association for Healthcare in Social Networks to encourage doctors to interact with the public online. [19659002] "This is where many of our patients and our communities are getting your medical information these days," he admits.

Chiang also says that "there must be a better way" to research people who publish medical information on the Internet.

"Some kind of verification process may be useful. "Many of these social media platforms only verify their users based on the fact that these people have a large media presence."

Verification processes vary from one platform to another, but most of the major social media, including Facebook, Instagram, and YouTube, does not verify the specific qualifications or truth or reliability of publications or videos.

They just prove that people are recognized and who they say they are.

Medical Medium did not respond to the BBC's request for comment.

YouTube said: "Incorrect information is a difficult challenge, and we have taken a number of steps to address this, including showing more authoritative content in medical subjects, display information panels with trusted sources and remove video ads that promote declarations. of harmful health properties. "

They said that medical medium videos" do not encourage dangerous activities leading to serious physical injury or death "and therefore do not violate YouTube's policy.

Facebook, the owner of Instagram, said they are working with experts to deal with malpractice If a verifier qualifies a health-related post as false or misleading, the company says it will take steps to reduce the number of people who view it on Instagram.