Breaking News
Home / Argentina / The highlights of the governor's speech

The highlights of the governor's speech

In one hour of 45 minutes, Alfredo Cornejo spoke before senators and alternates who gave formal opening to the legislature's regular meetings. And these are some of the most relevant points in his speech.

"Within the process of a reasonable and responsible dialogue, we have restored the common space to address the issues that are important to our agents, but also to look at the service we have to provide." The order for this discussion and professional behavior, as we have shown, has resulted in the termination of wage agreements with all public unions except one, which ensures that our employees do not lose with inflation, which has led to a calm scenario for the province. more just because, for example, it allows us to pay historical debts to more than 4,000 agents, including many teachers who have maintained legitimate statements with the state. "

" This new state we offer citizens It has made it possible to reduce poverty in Mendoza, although still high, it means we are on track because it has already fallen in 9 percentage points, ranging from 35 to 26 percent in the period we have had to administer, without forgetting that when we talk about poverty we talk about the deepest pain of man and every person counts, so every advance in that sense is nothing else than a gesture of encouragement to move forward with more power, because poverty must be completely eradicated. "

" We have seen an increase in vaccination tires in pregnant women, improved access to pregnancy control and control of the healthy baby, which means we consolidate the decline in infant mortality that has occurred. From a rate of 8.4 deaths per thousand living born 201

5 we went to 7.7 in 2016 and by 2017 we had a rate of 7.5 deaths per thousand living newborns. These rates involve 20 fewer childhood deaths. On the other hand, maternal mortality has a historical decline, which is the lowest, and reaches 1.6 per 10,000 live births, even the last three years, the lowest rate. "

" Soon, the regional mobility unit will be put into operation, called EMOP, with its own and specific functions at an autonomous control body, and the money is generated by the 300% increase in The collection for 2015, product of controls and infringement records has been fully allocated to improve these controls and increase the number of Red Bus charging points. These charging points, only in Greater Mendoza, have been expanded from 380 to 2015 to 450. In addition, we strive to implement the SUBE card in the metropolitan area and San Rafael at the end of this year, through which we will receive social security charges for the transportation service. Similarly, we have begun the major renovation work at Mendoza Omnibus Terminal, in accordance with the concession agreement. Regarding Metrotranvía, since the end of February, the frequencies for the service that Maipú connects to the city of Mendoza has increased to 12, during the working day's peak. Three additional pairs will be incorporated, which has been recovered through the development of a Mendoza engineer employed by the company, which will be added to the four circulating, allowing the rolling material for providing the service to increase with a significant saving compared to what which would be the acquisition of new units. We have initiated the bidding process for the acquisition of 50 hybrid and / or electric cars, for the provision of the structural roads in the Metropolitan Transport System. Soon we will promote the Provincial Mobility Law Project. "

" As far as tourism is concerned, Mendoza mobilized more than 3.5 million tourists in 2017, which represents a 7% demand for 2016. We are facing a turning point for connection in our province. To the excellent offer for national and international land transport, a large air supply is added very quickly. This is a crucial factor in tourism, as it puts Mendoza into new gondolas and, of course, allows the user to get time with direct flights and get better rates. Today, El Plumerillo is not only one of the most modern air terminals but also the highest growth in the country and the other in foreign tourists, an increase of 113% compared with the previous year. Tourism is one of the most powerful tools for transferring a strong image of Mendoza. " 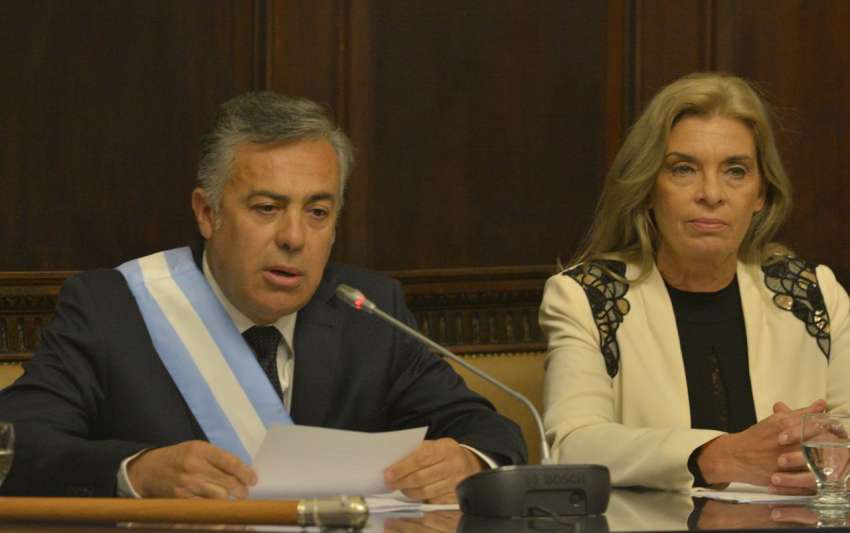 " In Mendoza Education Issues. That is why we face new challenges for society every day. And we get fruits that the people in Mendoza can see. Our program is concrete. We want our children to learn the language. That they read, produce and interpret texts and acquire a correct oral. Of course, we strive to master basic mathematical operations. We must strive for close cooperation with the new technology, but with our young people with the basic knowledge they do not always achieve. It's worthless to have a computer or a next generation mobile phone if you do not know what to look for in the infinite world of information provided by the Internet. "

" A state which also has the task of opening up new art spaces, mentioning the works commenced in August in the Fadermuseum, the new opening of the Carlos Alonso Museum, the Stopell Mansion and the next opening of "Espacio de Fotografía Máximo Arias", a place that will be the place of exhibition and teaching of photography. The cultural palace Julio Le Parc has also been transformed, as it not only continues to develop the same number of traditional activities, but also the surrounding environment is integrated through two programs that are key to this administration, such as Verano de Culillos and Barrio Le Parc. "

" In this context, we have gained the power we received from the 26 reforms we have already produced, and even those we prepare and that we will soon be sent to this legislator should be registered. such as the Law on Youth Criminal Responsibility, the Rules of Procedure for the Protection of Girls, Boys and Young People, the Family Code of Conduct and the New Conventional Code in the Province of Mendoza, thereby updating the entire normative and procedural framework. And it is also in this unique context that our express will to reform the province's supreme court must be understood. Ia who solves society's problems is respected, loved and trusted for citizens, prestigious, independent of nature and applied to work, as such justice is necessary to consolidate the new state as time demands. And our call is not shielding, on the contrary, to improve the functioning of justice, we already set up the construction of the Transition Station for Prisoners and Grips, and the Poverty Transit Pipeline, the first two buildings of the four that constitute the Criminal Court. In the coming months we will offer the remaining 2. Justice and security go hand in hand because crime is an integrated problem that occupies all parts of the state and compromises society in general. "