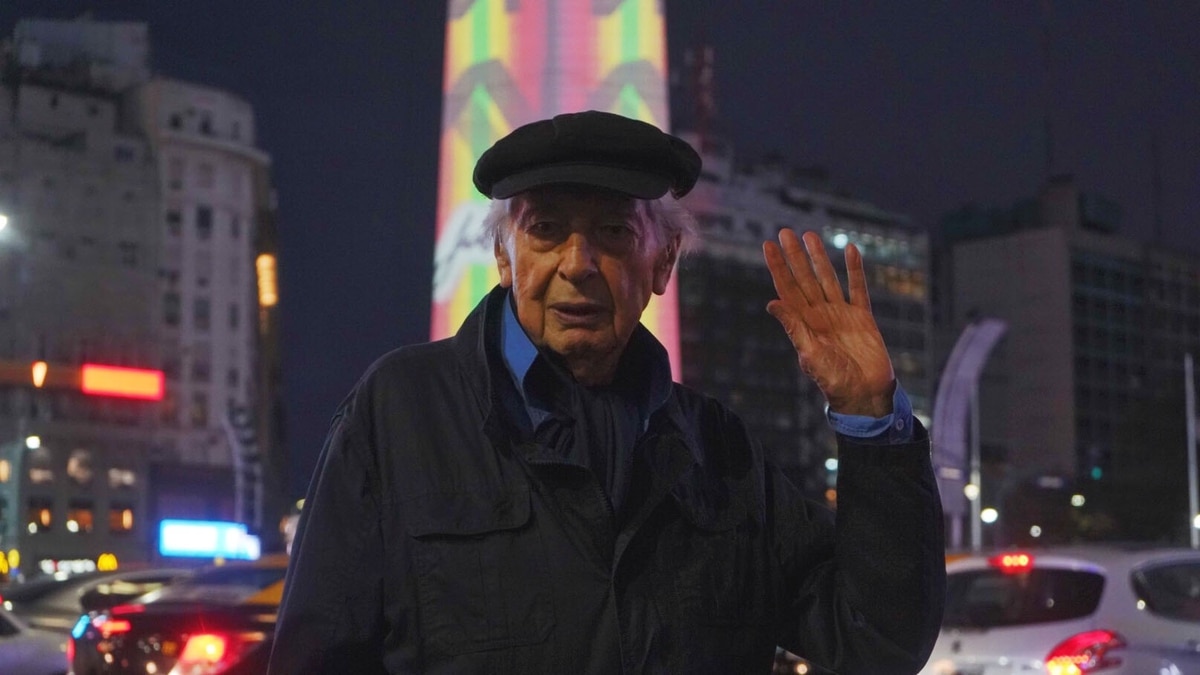 Julio Le Parc will today be the most prominent figure of The Night of Museums, the expected event in the city of Buenos Aires, which will take place between 20 and 3 in the morning on Sunday. His work can be seen in various public and private spaces for free, and he himself is responsible for an extraordinary environment: the illumination of the obelisk. On Friday night, Le Parc was in the process of preparation and spoke specifically to the public in Infobae .

The multi-faceted 91-year-old artist performed the light test on Friday morning, which will be the fantastic show on Saturday, November 1 at. 20:30, when the obelisk will be illuminated and illustrated by mapping the technology within the framework of "The Night of the Museums" and in the tribute National "Julio Le Parc-Un visionary", organized by the Ministry of Culture in the city of Buenos Aires. This is the first time Le Parc has been using the technology. With great courage despite a negative meteorology, Le Parc with the head of government Horacio Rodríguez Larreta, his wife Bárbara Diez and his little daughter and the minister of culture in Buenos Aires Enrique Avogadro details.

After decades of research in light and motion, Le Parc, one of the great representatives of kinetic and contemporary art, will use the technique mapping for the first time to project a large number of works and effects in one of the largest Buenos Aires emblems. It is an unprecedented fact that within the framework of the night of the museums and in the national tribute Julio Le Parc-Un visionary organized by the Ministry of Culture in the city of Buenos Aires. It will be a free and never before seen cultural event in the public space.

But there will be much more Le Parc.

In the National Museum of Fine Arts on Libertador Avenue, there will be talks about the work of the great Argentine artist and some of them will also be using sign language, specially designed for hearing impaired or hearing impaired. The exhibition "Transition Buenos Aires-Paris (1955-1959)" by MNBA examines from more than 100 works the artistic, aesthetic and conceptual development of a key figure in international art, a pioneer in kinetic and optical art. During the opening of the Buenos Aires-Paris crossing, Le Parc told a small but important story, when he was still a teenager and participated with a friend in a picture competition at the zoo in Buenos Aires, a competition he won. But what enlightens his eyes, which reveal the experience, is not so much to have taken the first place or the "valuable book of impressionism" he had as a prize, but Antonio Berni was in the jury. Thus, shocked that he had been chosen by a referent, Le Parc knew that in his veins there was art, that light came out of his eyes.

In the Galician Tower, located in Pte. Tte. General Juan D. Perón 430 opens its doors during Museum Night. Admission will be free and free. Galicia incorporated the work Sphère Acier Miroir into the hall in its main corporate building. It is a mirrored steel sphere consisting of 2,692 metal parts, spread over 4.5 meters in diameter, which represents the continuous movement, dynamics and creativity, characteristic of the company's identity, which gives an experience unique and differentiated.

Sphère Acier Miroir will be accompanied by introductory talks to Le Parc's work, led by the artist's curator Mariano Guilmore, including 20 to 00 hours.

Time behind, his son Yamil, a great partner and producer of his father's work, told Infobae that the dream for the great artist was to be able to see a kind of "leparquization" of the city. The moment seems to have arrived.

Considered: how to collect the third step in the 10,000 peso binding