Breaking News
Home / Argentina / Alberto Fernández, in the act of Independence Day: “I came to end the series hate”

Alberto Fernández, in the act of Independence Day: “I came to end the series hate” 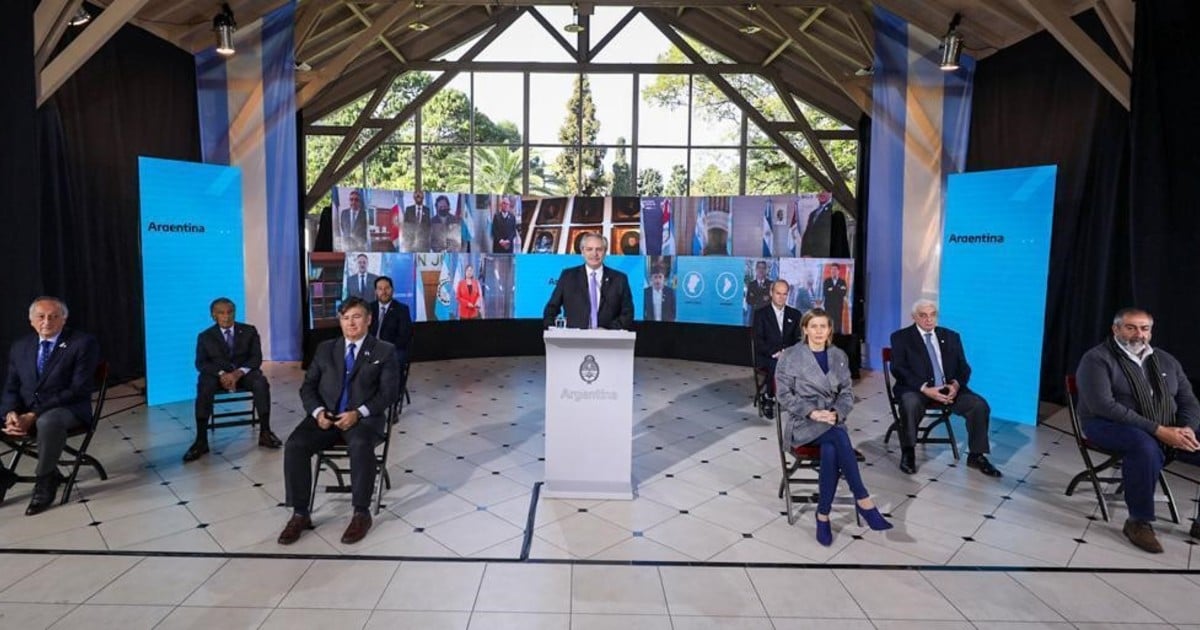 President Alberto Fernández declared this Thursday that one of his missions in the government is “end serial haters“He did it from an associate professor in Olivos, surrounded by businessmen and unions within the framework of the Independence Day action.

“I came to end the series hate and I came to open my arms for us to unite. I will not install a single number. I celebrate diversity in Argentina. Of all kinds, gender and ideological. I celebrate it, but I need it to be done with responsibility and the first responsibility is not to lie, to tell the truth and to respect each other, “Fernández said.

Through the videoconference, the president led the central act of the 204th anniversary of the Declaration of Argentine Independence, with the governors of the 24 districts of the country following his speech virtually.

“Tomorrow Argentina is rebuilding it with all those who are here. We all united we must build Argentina who will, because what we must understand is that hatred and division left us in the place we are left. It hurts to see hate, wherever it comes, because it hurts us and paralyzes us. Argentina that will have to be another Argentina, insisted the head of state.

At the same time, the 23 governors and the head of the Buenos Aires government Horacio Rodríguez Larreta participated in the act through teleconference. “I promised that the government would become the president of the government and 24 governors. The 24 governors they are with me today, united and working to meet those who touch us“Fernandez said at the beginning of the act.

Fernández attaches great importance to being close to the governors and made it clearer to those with whom he has a closer and daily relationship. Among them was Horacio Rodríguez Larreta, whom he referred to as “my friend” the head of the government of Buenos Aires. On the list of committees were his “dear Axel Kicillof” and his “always friend Alicia Kirchner”.

With Rodríguez Larreta and Kicillof, he is the one he shares the most time, practically or personally, because of meetings on the progress of coronavirus in the Buenos Aires Metropolitan Area.

“You would like the temperament and courage that the heroes had to face during those moments. We live in a difficult time, but in difficult times we have to be like these men,” Fernández said.

And he added: “We are dealing with this universal upheaval which is the pandemic and the truth is that seven months after arriving (to the government) I saved something that we as a country could do. We all agreed that we had to preserve health and the lives of people first and foremost everyone We understood that there was neither a dilemma nor a dilemma“.

He also looked ahead and assured that they are working on thinking about the future, because “this quarantine period is over and when all this is starting to take some quiet.”

“It is not true that we do not have a future and even less that we have no ideas. We already have much clearer why the things that happened to us happened and why we can’t repeat them again, ”he stressed.

The anniversary acts, without publicity, began on Wednesday at 11pm, with a gala in the San Martín Theater in Tucumán, broadcast by the YouTube channel from Ente Cultura de Tucumán and Provincial Channel 10, they stated on the provincial government’s public communication website.

Then, as every year, a vigil was held in the historic house, where the national anthem was sung with the presence of the governor of Tucumán, Juan Manzur along with a small group of authorities from, among others, the executive, legislative and judicial branch.

Previously, the solemn Tedeum took place under the chairmanship of Archbishop Carlos Sánchez, in which a small group of authorities also participated under the leadership of Governor Juan Manzur and his wife Sandra Mattar Sabio.